Group A of G-1 Asia is tied after Orange beat LGD.cn

Orange takes a convincing 2-0 win against LGD.cn with calculated, aggressive plays. Now group A is tied with all teams on a win each. 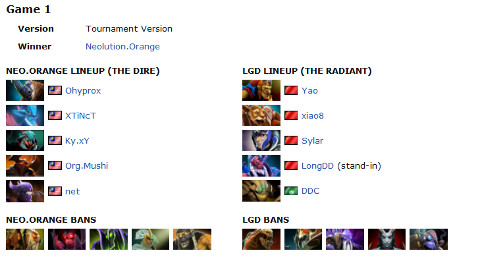 Orange got off to a great start in getting a first blood on Luna before the creeps even spawned as Orange stalked LGD.cn's jungle with four men. The aggressive tri-lane completely dominated the lane due to the high amount of disable and burst damage. The presence of Chaos Knight, Bane Elemental and Leshrac greatly suppressed carry Luna's creep stats to less than one creep per minute. Despite a seven minute Blink Dagger on solo middle Brewmaster, Xiao8 was unable to turn the tide of the game with his ganks.

By the 17th minute, Orange already achieved over a 10,000 gold and experience lead, with total control of the game, taking tower after tower, limiting LGD.cn's farm as well as forcing LGD to group up as five. At the 24th minute mark, Orange took an uncontested Roshan.

Orange decided to go for the final push after 28 minutes game time with an Aegis on Magnus. LGD.cn tried to delay the push by trading lives with Orange. As a last stand, LGD.cn pulled off some perfect team fights, but the lead was just too much. Mushi's Chaos Knight with a Black King Bar was unstoppable; rampaging through LGD.cn's squishy line-up. Upon losing the bottom barracks, LGD.cn called the GG. 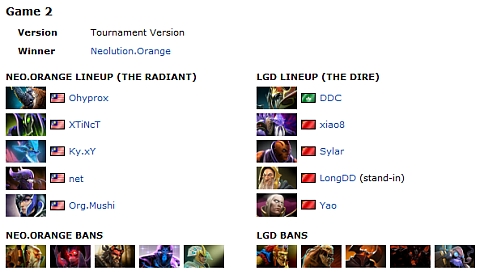 LGD.cn got off to a good start with unconventional lanes. LGD opted for the Anti-Mage to go solo middle against a Magnus, with Yao's Invoker taking the safe lane. LGD.cn got first blood on the farming Leshrac. Around the 10th minute, Yao was unable to reconnect after his disconnection. The two teams decided to go for a clean remake.

After the remake, the game was in favour of Orange as Luna got first blood with a solo kill on Dark Seer. Anti-Mage could not farm middle with constant enfeeble from the Bane Elemental.

Despite the strong advantage Orange achieved during the early game, the mid game was back and forth with 10 kills each. LGD.cn slowly clawed back the game with a couple of strong team fights; taking down Mushi's Luna by isolating him on the high ground from a Dark Seer vacuum.

However, Luna was simply gigantic with Black King Bar, Manta Style and Butterfly. Orange capitalising their lead with constant pressure as Orange had the superior items and team fight heroes, taking down the middle barracks by the 30th minute and Roshan seven minutes later. Orange played patiently for the rest of the game, slowly chipping away the top tower of LGD, and LGD.cn finally gave in and called the GG by the 40th minute.

With only two games to go in the group, all four teams will be gunning for the win to make it into the offline playoffs next month. The next team to lose may be eliminated from the tournament.

G-1 League will continue tomorrow with iG challenging DK. The game is scheduled to begin at 13:30 CEST. Live broadcasting will be provided by Ayesee and BeyondTheSummit.