Spectacular showcase of skills and patience from both teams as the games were ridden with disconnection and crashes although the ending of game two was well worth the wait. 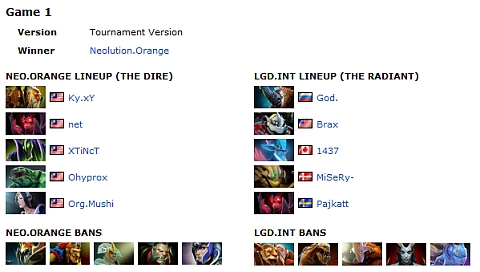 Orange kicked off game one with a very unorthodox solo mid Tidehunter against the Magnus. Besides that, Orange also picked up Priestess of the Moon as their safe-lane farmer while LGD.Int picked up the Shadow Fiend.

Clockwerk ended up going down to Priestess of the Moon for the First Blood despite the sloppy initiation. After taking down the top tier-one tower, PotM and her two supports rotated mid and picked off a few more of LGD.Int's heroes. The kill score was up to 0-5 by 8 minutes.

LGD.Int grouped up multiple times but failed to make all the wasted time worth. Orange was always ready for their tower dives and repelled their attacks successfully on multiple occasions.

As the game progressed into mid-game, both teams traded kills with Orange coming up slightly on top considering Lone Druid did not participate in any of the fights.

A big engagement on the bottom lane broke out as the Shadow Fiend once again got picked off to an overcommited Tidehunter but Orange was much too farmed for LGD.Int to get some revenge kills. Four of LGD.Int heroes went down in that fight despite Orange only fighting with four men.

LGD.Int efforts to gank the Lone Druid at the 27th minutes once again failed with three of their heroes going down to a counter-attack. The game was too far for LGD.Int to reach as Orange took game one. 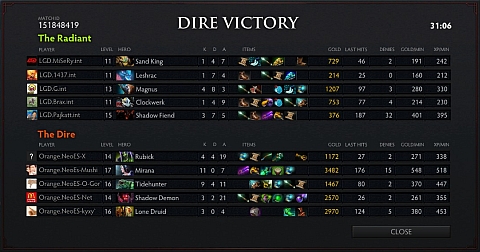 The First Blood of the game came just before the second creep wave arrived to the battlefield. LGD.Int disguised their trilane and baited the Rubick and Lina to engage on Clockwerk before the Leshrac and Shadow Demon came in for the kill. With that First Blood, Orange's trilane was somewhat lost and Mushi's Morphling was forced to resort to tower hugging to gain some levels and farm.

Things started looking even more bleak for Orange as they lost the Magnus due to an overcommitment to kill the Luna with the help of two supports. Morphling also died as his supports left the lane to perform the foremention gank.

Although Orange did recover slightly from LGD.Int's vulnerability when they were taking down towers, LGD.Int still have the better heroes for mid-game as they barreled through Orange and took down their tower. The gold advantage for LGd.Int was up to 6,000 by 15 minutes.

Nothing much happened between 15 minutes and 25 minutes apart from Clinkz dying twice to Reverse Polarity and LGD.Int spending 2 minutes killing off Roshan without the Clinkz. With the Aegis up on Luna, LGD.Int overextended past enemy lines and Clinkz died for the third time to Reverse Polarity.

SD items 35 minutes
With the few kills that Orange got, Morphling was able to buy his Ethereal Blade and Orange was now on the offense. LGD.Int introduced the Ethereal Blade to Clockwerk in the top lane before winning a big fight in the mid lane. Orange took down their first tower of the game and attempted Roshan but retreated after being scouted out by Clockwerk. LGD.Int took advantage of Orange's retreat and took down Roshan themselves.

Despite losing some of the recent fights, LGD.Int were securing more farms due to the map control they had. Leshrac avoided a death to Morphling's shotgun with a Black King Bar while the Shadow Demon was close to a Scythe of Vyse at 37 minutes.

After killing off the third Roshan, LGD.Int mounted for a push at the bottom lane while Morphling pushed out the middle and top lanes. LGD.Int lost their patience and pushed deep into the Radiant base and successfully took down the rax at the cost of an Aegis and four heroes down. Credits to Magnus for a first Reverse Polarity that hit two heroes and a second which hit three. Clinkz narrowly escaped that battle. 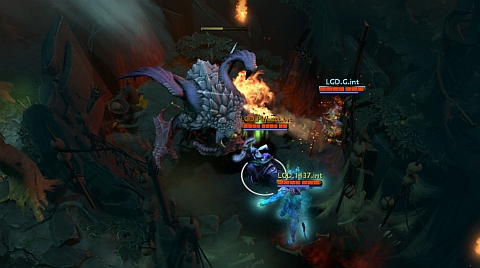 LGD.Int going for the fifth Roshan.

Shortly after, LGD.Int moved towards the top lane and slowly sieged Orange's base tower. After four waves of creeps, the tower was down. Orange charged out onto LGD.Int knowing that they couldn't let the siege continue but ended up losing the fight. However, LGD.Int backed off as Morphling bought back into the game. LGD.Int killed Roshan two minutes later.

With the Aegis and the Cheese, LGD.Int rushed into Radiant's top entrance and took down the barracks with backdoor protection up. Two of LGD.Int's support fell in the skirmish but it was well worth it.

LGD.Int made a crucial mistake as the game approached 60 minutes by going after an Magnus Replicate while Morphling took down the middle melee rax. The teleports did come but it was too late. The bottom barracks also went down from a split push earlier in the game. LGD.Int dove into mid for a push but Magnus once again pulled off a double Reverse Polarity and stopped the push.

LGD.Int went in for the all or nothing with the newly acquired Cheese and Aegis and took down both the middle raxes. Morphling and Magnus ran ahead into LGD.Int's base and destroyed all the barracks while Luna died after she destroyed Orange's last barracks. Both teams have mega creeps now. Luna did not have buyback.

Orange performed better in clutch as the Tinker and Magnus provided sufficient support for the Morphling to burst down the tier-four tower and the throne just as the Luna revived.

With the win secured, GEST The Challenge will be NeoES.Orange's fourth first placing in SEA tournaments this year - the only loss was to MUFC in GEST February Cup.

NeoES.Orange will be rewarded $1,000 for their fantastic play throughout the tournament while LGD.Int will settle for $500.