In the battle between the two Malaysian titans, NeoES.Orange manages to overcome rival, MUFC in straight games. NeoES.Orange will be the first finalist of GEST The Challenge while MUFC have to go through LGD.Int for their next revenge.

The game started off terrible for MUFC as their Queen of Pain gave away First Blood to a very good wrap around by Orange. MUFC then gave away another three kills against Orange's offensive trilane due to the level advantage of Orange's heroes, and also the item advantage.

MUFC tried to stage the comeback with a gank on Puck but Mushi was way too fast and outplayed both the Magnus and the Queen of Pain with an invisibility rune. At this point, the Lifestealer was up to 49 creep kills while Orange's Brewmaster was on 58 kills. MUFC's highest creep kill was Queen of Pain at 38.

Although MUFC did get a slight comeback in an overextension at the bottom lane, Fzfz's Queen of Pain immediately threw the lead away by giving away the solo kill and also the tower to Puck.

The lead grew bigger and bigger and soon enough, Orange was able to start diving into MUFC's base to pick up kills. The lead Orange had from early game was too much for MUFC to recover. Orange took game one. 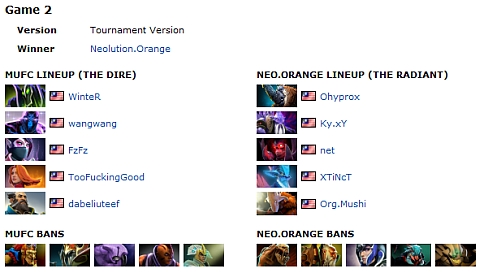 In the second game, both teams abandoned their off-lane and put the fifth hero into the jungle to secure some farm. However, due to Dark Seer ability to move from creep wave to creep wave, he was able to secure a little more farm compared to MUFC's Enigma.

The First Blood came as Magnus was able to pick up a solo kill on Templar Asssassin with the help of Ion Shell from the Dark Seer. The revenge came quick however, with MUFC smoking up and stormed the mid lane to annihilate the Magnus.

Free-farming Juggernaut on the other hand, managed to push down two towers in the bottom lane.

A huge fight ensued in the middle lane which Orange came up on top from a big Reverse Polarity by Magnus. All of MUFC's heroes died except for Templar Assassin who narrowly escaped.

Both teams performed sloppy in game two as another engagement filled with mistakes and missed stuns ended up working in favour of Orange. However, MUFC revived and managed to snuck a Roshan. Templar Assassin picked up the Aegis.

The game fell into a dormant state and MUFC, with the weaker late game carries smoked up in hopes to pick off a hero and take down a tower. They narrowly missed picking off the Dark Seer and lost the next teamfight from what GoDz would "PGG Blackhole".

Orange dove straight into mid, eventually took the game and a spot in the grand final of GEST The Challenge. 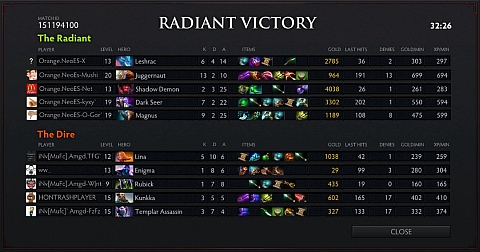 GEST The Challenge will resume at 18:00 SGT / 11:00 CET tomorrow. The first best-of-three game will be between MUFC and LGD.Int followed by a best-of-five grand final game between NeoES.Orange and the winner of the LB final. 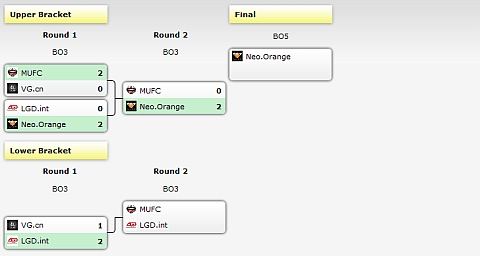 BeyondTheSummit will be broadcasting from the main channel tomorrow at the appointed time.