THOR: Nth and Fnatic are the group winners

The group stage is over, NoTidehunter and Fnatic won all of their games. 4 Friends + Chrillee aswell as Pulse Esports take the runner-up positions. Semi finals are rescheduled for tomorrow 10.00.

ROOT-Gaming are eliminated already after a shaky group stage performance, dropping all three games. Group B just started with Fnatic and Pulse being the favourites. The winner of the group gets paired vs 4FC in the semi finals while the runner-up will have to take on NoTidehunter. The semi finals are scheduled to start at 19.00, but some delay is likely.

UPDATE: Fnatic played a solid group, winning all their games rather convincingly with EternalEnvy sitting behind them all the time, studying and taking notes. The group winner game, Pulse vs Fnatic featured a 5vs5 situation before minute 0 with both teams searching for the other one. Fnatic won the skirmish 3-0 and Pulse didn't manage to recover after that, resulting in Fnatic doing well in all lanes and eventually winning the game pretty straight forward. 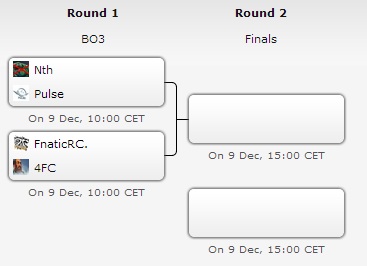