Nirvana's Seaking in the spotlight at Team Razer page 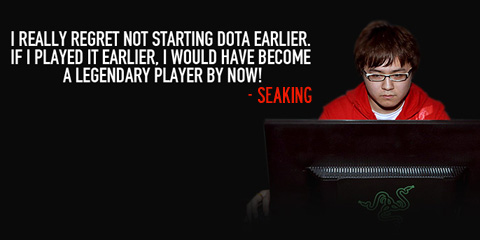 Yang "Seaking" Tao is Chinese-based Nirvana's carrier and one of their most important player in 2011. With a silver medal at SMM 2011, a fourth place in World DotA Championship and the first place in the WCG China Wuhan qualifier, Nirvana further cemented themselves as one of the premiere Chinese DotA teams.

In a spotlight article on the team's sponsor page, the fans can get to know the Luoyang son in depth. In it, we find out that he regrets not starting DotA earlier.

- "If I played it earlier, I would have become a legendary player by now!" said Seaking who started competitive DotA as late as in 2009. As many progamers tell, Seaking did not have receive that much support when spilling his ambitions of becoming a professional player.

- "I really wanted to achieve something in DotA to change people's opinions about this career path, to prove to them that it's not just about playing games," says Seaking.

We also get to know what he thinks is the key to his success with the game.

- "I think it's because I have my own ideas of how to play. Compared to other professional gamers, my performance is stable; I don't make big mistakes," he says but at the same time admits that he has a lot to learn when it comes to communication and leadership.

- "I also think that if I had invested the same amount of time in another game I would not have been as successful. DotA is well suited to me because it's mainly about teamwork," says Seaking.

Nirvana are currently playing in the DreamCup Winter season. With six losses in a row, the team holds a 3-7 score after 10 playdays. Up next is the overall fourth-ranked team PanDa.