'We'll crush anyone who gets in our way one by one at WDC.' 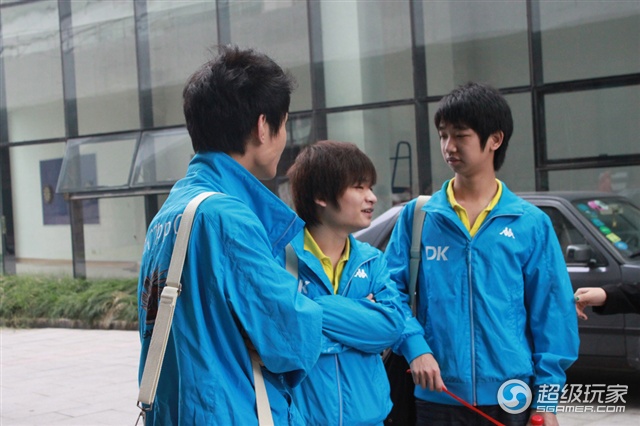 Yueru outside GK's competition venue with LongDD and Zippo.

Undefeated throughout the entire tournament, DK currently stands at a formidable lead above the rest in Chinese DotA. A reporter from Replays.net managed to pull DK's semi-carry Yueru aside for a short interview after his team's victory.

Give us a short introduction.
-"Hi everybody, I'm DK's Yueru and I currently play under DK.Super."

This is your fourth consecutive title. Is there anything different about your win this time?
-"Not really. We faced the same difficulties in the beginning, but eventually won over all the other strong competitors. At the same time, I feel incredibly ecstatic having won the championship once more."

Are you at ease now that you won the competition undefeated?

-"Never were we once at ease. Throughout the tournament, we've been carrying the same ruthless 'kill all in sight' attitude."


What was the hardest match of the tournament?
-"They were all challenging to me. Now that we are at the center of everyone's focus - since they are all experimenting with ways to beat us - we haven't had an easy time in this tournament."

With more offline events springing up in the scene, your team has also established an infamous reputation for trashtalking and flaming. What are your thoughts on the matter?

-"I feel that it has always existed at offline tournaments. The difference is that the live shoutcasts are now picking up what the players are shouting at each other during the match, and so audiences are beginning to notice it as well.

From my own point of view, I think that trashtalking and flaming is one of the special features of offline events, and it adds flavor to the atmostphere - players are more hyped up."

At the beginning of the year, you were not doing so well as a player. Now, more and more people are proclaiming you to be China's fastest improving and up and coming semi-carry. What was responsible for this change?


“
The attitude that we take towards training as well as the quality of our training sessions would be something that is certainly unmatched.”

-"The teams I was in previously pretty much took an easygoing attitude towards everything. Firstly, DK has a strict management, and also everyone on the team has a feverish desire to be champions.

Therefore, the attitude we take towards training as well as the quality of our training sessions would be something that is certainly unmatched. The whole team is united and can basically work anything out, hence it shows in the tournaments we win."

Why did you choose to take on the ID 'Super' when you entered DK to replace 'Yueru'?

-"Oh, pay no heed to that, it was done out of whim. My nicks mean no more to me than just a label."

“
As long as we keep up our current pace of training, we will still rule over the rest.”

DK is widely regarded as the most dominant team of map version DotA 6.72f. Do you think this will change when 6.73 is released?
-"No. I feel that regardless of the map version, as long as we keep up our current pace of training, we will still rule over the rest."

What is the biggest change you would like to see in 6.73?
-"I don't really care about map versions to be honest. The changes mean nothing to me."

WDC is fast approaching. What are your goals?
-"Still the same as our previous tournaments - we'll crush anyone who gets in our way. We are not afraid of losing, because DK currently can afford to!"

Tell us abit about the nicknames you give each other (for example, you are referred to as 'bun').
-"Well, my teammates call me 'bun' because when I entered the competitive scene, my face started to get rounder and resembled a bun. Take Burning as another example - when he plays good, we call him B-God. However, when he screws up, we'll call him B-Noob."

Any last words?
-"Thanks to all our supporters, and I hope you guys will continue to support DK because we will not let you down."