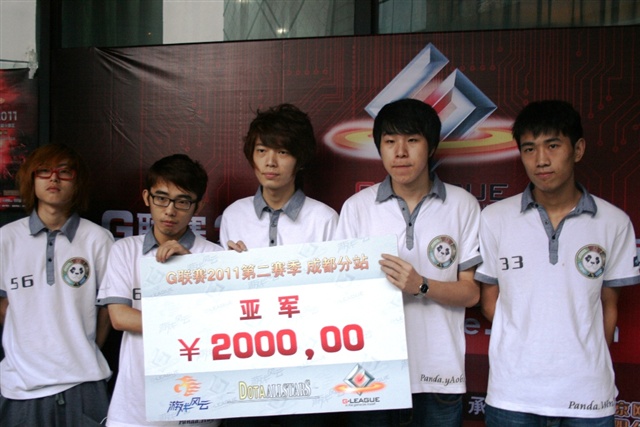 PanDa at a G-League qualifier with Hao at extreme left.

After defeating WE 2:0 in their previous G-1 group stage match (see) and having already qualified for the offline finals of WDC, PanDa are looking in great shape at the moment. G-1 reporter Soy approached PanDa's carry Hao recently for a short interview regarding the tournament and more.

Hi Hao, give us a short introduction.
-"Hi everybody, I'm PanDa's Hao."

Firstly, congratulations on your 2:0 victory against WE. In your opinion, what was the most decisive factor behind your win?
-"I felt it boiled down to the fact that we all performed well during the match, and everyone on the team played at their best."

In game 2, your Spectre performed extremely well. Was it a result of putting him at middle lane?
-"I guess it was because Wind's Crystal Maiden did a great job babysitting me early on. Furthermore, I managed to score a couple of kills with my haunts (Ultimate) - which is one of the main ways Spectre gets really farmed."

2009 said during the livestream that Burning was like a 40 year old man (experienced carry), Zhou a 30 year old man (calm and stable carry) and yourself a 17 year old man. What are your thoughts on this? Do you feel you are more aggressive and ambitious as a carry player?
-"What 2009 said made sense I guess. Burning is an extremely stable player, and in this respect I genuinely emulate him. I can be quite aggressive at times, and this would lead to me dying unnecessarily."

How do you feel about this season's G-1 tournament? For example, the best of two group stage format or the match schedule.
-"G-1 is okay I guess... The best of two match format is working really well - it allows us to play against teams once, and then reevaluate our strategies based on their play style.

Matches can be arranged rather late in the night though, and our players can get quite tired in some of them."

Aren't professional gamers nocturnal anyway?
-"Some of them, perhaps. For us, our training sessions usually run from 6-7 p.m. at night to about midnight."

This is more healthy I guess. You've been in a couple of team transfers during the past few months. Now that you're in a team with relatively newer players, do you find yourself taking on more responsibilities as a result?
-"Oh yes. Back in Tyloo we had Ming doing the bans and picks, but now that I'm in PanDa, the bans and picks are left to me. I've had to contribute more - through discussions, for example - so I suppose naturally I've been taking on quite a number of responsibilities within the team."

I guess this pressure stacks on with the fact that you play the main carry but yet still have to make the decisions in game. What do you think is PanDa's biggest strength at the moment? Your team is playing extremely well online, and you guys don't seem to exhibit the 'mid-late game loss of direction' that other inexperienced teams possess.
-"I guess our biggest strength lies in the fact that we are all united as a team, and we all want to achieve something for the hard work we have put in. The rest of my team actually came from professional teams before PanDa so we know how to carry on during mid-late game."

In the current metagame, do you think Obsidian Destroyer can take down carries like Anti-Mage or Spectre?
-"Obsidian Destroyer is a very potent 1v1 hero, and he can apply tremendous pressure during the laning stage. I don't think there's a hero who can stand up to him and still get a clear advantage.

However, Anti-Mage and Spectre will shine during late-game. At the end of the day, it reverts to how the team plays as well as how the two lineups look like."

Thank you for accepting this interview, and I wish you all the best in G-1. Any shoutouts?
-"We will work hard and do right by ourselves and achieve something. Thank you G-1 for this interview."

TongFu next in the group stages of G-1. Click here to place your GosuBets.