After an amazing Week 3 in MPL – PH Season 7, Week 4 is just around the corner, with another batch of extremely important games for all involved.

On Thursday, April 22, Mobile Legends: Bang Bang Professional League Philippines Season 7 kicks off its fourth week of action, as teams look to push past the midway point in the regular season with a few wins under their belt. With Week 4 on the way, let’s take a quick look at the group standings, where we see Blacklist International and Aura PH at the peak of their respective groups – but as we know, everything could change in a Flicker. 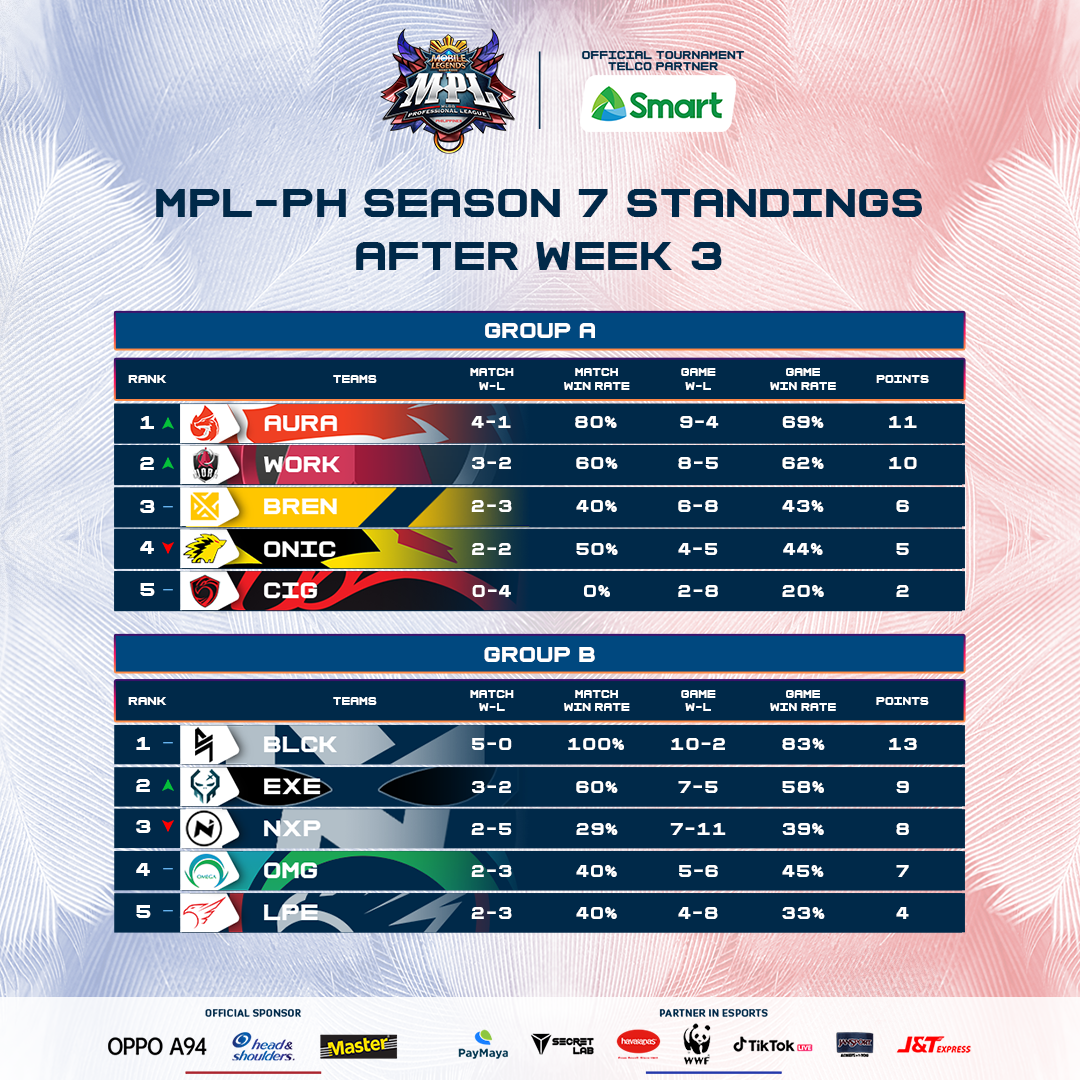 Aura and Blacklist - heading the groups

The Blacklist story has been one of the most talked about in the last week, as the team remain unbeaten in MPL – PH Season 7, currently on a brilliant six-game win streak, with Oheb even grabbing the MVP of the Week due to his amazing performance during Week 3. This week, the team look to take their lead at the top even further as they take on two struggling teams – Cignal Ultra and Omega Esports. In Group A, Aura PH have been flying under the radar to secure their current first place standing, but with series against Cignal and Work Auster Force this weekend, they’ll definitely be a team to watch.

Cignal and Bren - needing their wins

Although only starting their MPL – PH Season 7 campaign last week, Cignal were put in a tough spot where they would play four series over the four-day period of Week 3 – and this week changes nothing. Another four series are on the cards for the team, with two in a row on Friday and opponents such as Blacklist, Work Auster Force and Aura PH to deal with. If last week was tough for Cignal, Week 4 is going to be an entirely new level of difficulty as they search for their first win. On that note, Bren Esports have partially seen their season get back on track – after losing their opening three series. With two wins under their belt now, the Season 6 champions need to bring their best as they take on Work Auster, Onic and Laus Playbook Esports in Week 4.

Below is a breakdown of the series coming our way in Week 4 of MPL – PH Season 7: While there are a total of 12 series to be played in Week 4, some rather interesting matchups are set to occur, and we are extremely interested to see just how the following series will play out:

Week 4 is just around the corner and we’re excited to see what heroes these brilliant teams will be picking as they battle past the midway point in MPL – PH Season 7’s regular season.

Not right now
Thank you for voting!
Definitely
Thank you for voting!
Jarrad “Belandrial” Adams
Belandrial has spent most of his years following Dota 2 closely, but now has found a new home in the complex world of Mobile Esports. When not watching nearly every possible esports title available, you can find me running around Azeroth or building strange bases in Valheim.
Share Tweet
6 people reacted to this post