Valve have released The International 2022 Swag Bag, which rewards active players with 30 days of Dota Plus, the Battle Pass and one Arcana of their choice.

The end of this season has felt slightly underwhelming to say the least. The Battle Pass was released late, and it was nowhere as good as the previous TI Battle Passes. Due to that and the lesser time between the release of the Battle Pass and The International 2022 (TI11), the TI11 prize pool is also significantly lower than past few years ($17,887,029 for TI10 as compared to $40,018,195 for TI11).

But today’s update, which came as a pleasant surprise for the entire Dota 2 community, might make up for some of that. Valve announced The International 2022  Swag Bag to celebrate a joyous season of Dota 2.

And oh is the Swag Bag bound to bring joy to all active players (any Dota 2 player who plays or has played at least 10 games of Dota during the 2022 Battle Pass season)! It contains three main things:

What if you already have bought the Battle Pass? No problem! You’ll get 24 levels for you Battle Pass in that case. Everyone is taken care of.

But the big home run of The International 2022 Swag Bag is the free arcana. Active players will be able to choose an arcana of their choice from all the ones that are available in store for $34.99. The ones to choose from are-

That’s quite a list to choose from, which makes it a pretty difficult decision! But difficult in a good way. 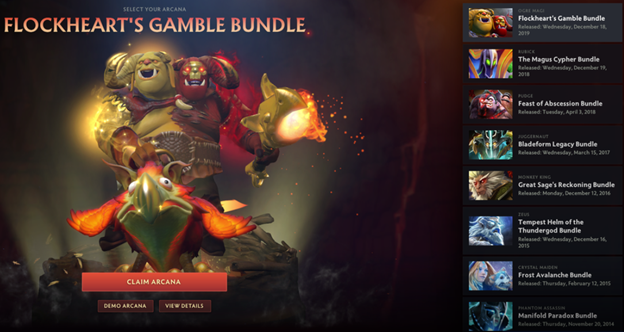 With the final four games of TI11 approaching, this is what Valve had to say-

Once the champions have earned their crowns, make sure to stay tuned for the release of Part II of the Battle Pass — arriving November 3rd to introduce a new Diretide event mode, the Candyworks, new 'Conduit of the Blueheart' Crystal Maiden persona, and more.

Free Battle Pass or levels, a free arcana, 30 days of Dota Plus (probably the most underwhelming of the bunch), some amazing Dota 2 action in the fight for the Aegis on the horizon, followed by Part II of the Battle Pass and Diretide to mitigate the lull from the end of the Dota 2 season – things sure are looking good!

Does The International 2022 Swag Bag make up a bit for the underwhelming Battle Pass?