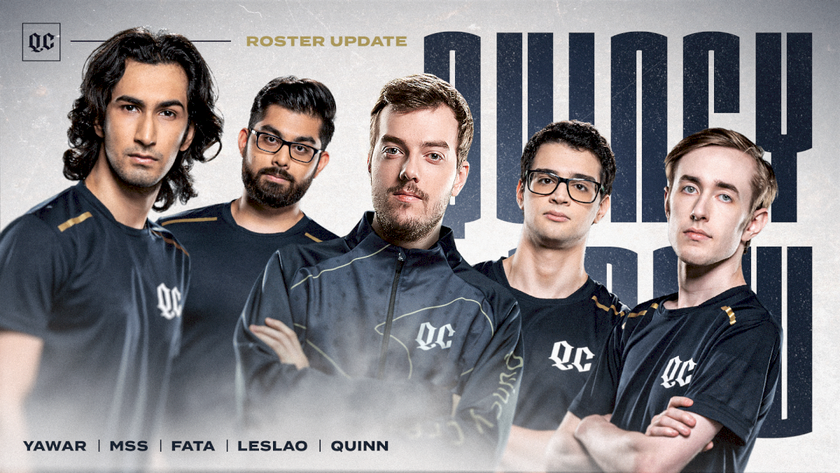 Quincy Crew will be entering the final DPC Season of the year with Leslao, MSS and Fata added to their roster alongside Yawar and Quinn.

‘What goes around, comes around’, is a perfect saying for the Quincy Crew Dota 2 roster. Two of the three members who left QC at the end of TI10 have joined forces with the club again in the journey to make it to TI11 in Singapore. Rodrigo "Leslao" Santos and Arif "MSS" Anwar have come back to the team with whom they’ve had the most successful periods of their careers. But with them, also comes a new face, who will be the position 5 and possibly the captain of the team – Adrian “Fata” Trinks! Fata will take the place of Avery “SVG” Silverman from the TI10 Quincy Crew roster, who it seems, has made the complete transition from player to analyst.

After TI11 ended, Quincy Crew parted ways with Leslao, MSS and SVG to start a new journey. Their reformed roster performed quite well in the 2021-2022 Winter DPC Tour, but as Evil Geniuses and TSM FTX began to find their footing, QC got left behind in the rearview mirror. In the Spring DPC Tour, they were able to take the NA DPC League to tiebreakers with the other two NA juggernauts, but fell short there and missed out on the ESL One Stockholm Major. After the unsuccessful season, the team parted ways with their three newest members, with the latest one being their TI10 coach and recent position 3 and captain, Maurice “Khezu” Gutmann.

What were the two returning members up to during this time? Leslao had a stint with Alliance in the EU DPC that went so bad that Alliance got relegated to Division II during the DPC Winter Tour. MSS stuck around in NA, playing as a stadin for Evil Geniuses in the Winter Tour and as a substitute for Quincy Crew in the Spring Tour. Now, the player who is widely considered as one of the best position 4s in the North American Dota 2 scene, will get to flaunt his skills once again on the big stage.

As for the new member, Fata, it has been a quiet few months. Fata nurtured Tundra Esports to a strong place in the European Dota 2 scene, but was kicked before the start of the 2021-2022 DPC Spring Tour.

I have been kicked from tundra. I go chill

After taking some time off and thinking about where he would like to take up his next challenge, Fata has emerged in NA after five years, since he played for Cloud9 at The International 2017 (TI7). MSS was also a part of that roster.

Looking at the way things stand in NA right now, only TSM FTX have a high enough points tally that will get them a direct invite to TI11. The new Quincy Crew roster will have to accelerate themselves to their best Dota 2 capabilities to have a chance of making it to the PGL Arlington Major in August, where they will need a strong showing to get a direct invite to The International 2022 in Singapore in October.

Will the new Quincy Crew roster make a major impact in the third DPC season of 2021-2022?