After recognizing the good and bad heroes in Dota 2 resulting from patch 7.29, IceFrog has blessed us with a balance patch in the form of 7.29b.

The latest major Dota 2 patch, patch 7.29, brought a lot of changes to gameplay, items, and heroes. As the dust settled and players got used to the new patch, certain heroes stuck out as compared to others and quite a few seemed to suffer from a dearth of power. To even the odds, Valve has released patch 7.29b, which is a balance patch just for heroes. A total of 41 heroes received either buffs or nerfs, and the entire set of changes can be found here. We will take a look at the most prominent hero changes that have come along with patch 7.29b.

Hoodwink, who was massively overpowered on her release in patch 7.28, was nerfed multiple times between then and her introduction to Captain’s Mode in patch 7.29. But the nerfs were so severe, that even the introduction of her Aghanim’s Scepter and Aghanim’s Shard wasn’t enough to make her good a decent hero to be picked in professional games. In the first five days of Season 2 of the DPC Leagues, she was picked just twice across all six regions, which was a good indication that the ferret was in need of some buffs. Patch 7.29 has made her tankier, with increased strength gain and additional HP from the level 10 talent. The hero is quite squishy and this should help her survive when initiated on, before she can get off Scurry.

Acorn Shot’s initial instant attack damage was 100% when the hero was released, which was taken down to 65%. Acorn Shot is a good portion of Hoodwink’s damage, not just against heroes, but against creeps as well, to keep waves pushed out from the trees. When she’s trying to stealthily push out lanes, the additional Acorn Shot damage will be a big help. 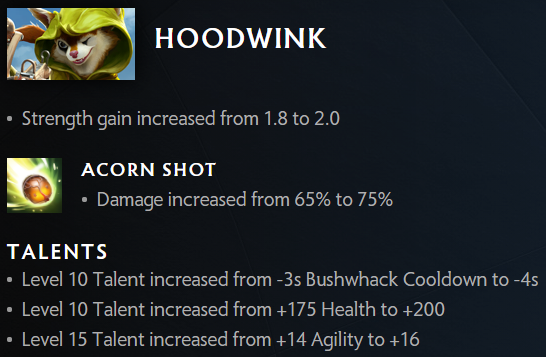 Lifestealer saw a bit of his old self return with patch 7.29, getting back the ability to damage heroes based on their maximum HP. That, along with the buffs from patch 7.29, made him a highly contested carry in Season 2 of the DPC Leagues. The nerf from patch 7.29b reduces his base damage by 2, which is a big deal, because he already had his base damage reduced by 3 in patch 7.29. Even though he does additional damage with Feast, at level 1, that is just 0.6% of the target’s maximum HP. Against melee creeps, that is about 1.8 additional damage and against ranged creeps, that is 3.6 damage, which is lower than the reduction in his base damage (total base damage reduction of 5). So for at least the first two levels, the hero will have a harder time in lane last hitting. The nerf comes as a bit of surprise as LS was down in the dumps for the entirety of last patch and even on the new patch, only has 9 wins out of the 19 pro games in which he has been picked (47.37% win rate).

Lycan lost one of the biggest tools in his arsenal when patch 7.29 was introduced – Necronomicon. IceFrog has been trying to market Lycan as a fighting carry who does not need help from Necro book summons, and the marketing strategy has brought the wolf some good deals. His agility gain has gone up from 1 to 1.7 in the last two patches, which along with the increased Shapeshift time and Feral Impulse damage, make him a formidable right clicker when in the wolf form. His Summon Wolves friends also have had some love shown to them in the last couple of patches with lower mana cost, movement speed slow to the target and additional HP. Two 475 HP wolves (which can be 675 HP with the level 15 talent) at level 7 which can also slow heroes are a support’s nightmare. If Lycan goes mid, he will end up being level 7 when the opposition supports are level 4 or so, and three strong wolves chasing a support that early on in the game is a terrifying thought. Lycan has two paths to tread in the new world without Necro book – he can either play as a right click carry or he can still go the old summons route with stronger wolves and even add two more companions to that with the new Helm of the Overlord. 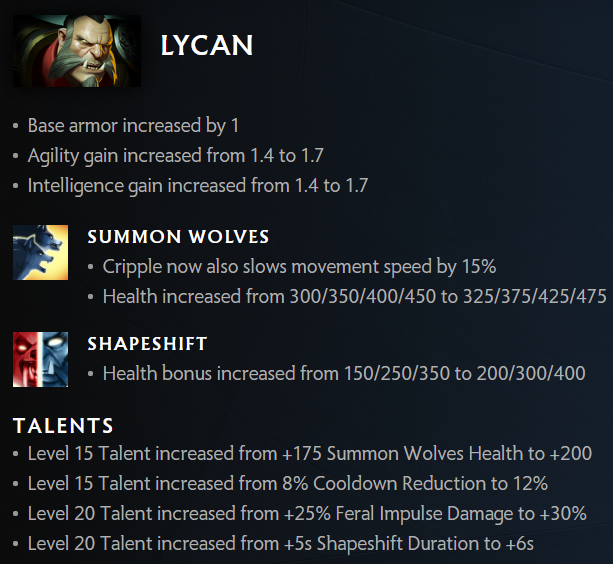 Phantom Lancer rose to the top as the strongest carry to emerge out of Dota 2 patch 7.29, thanks to his Aghanim’s Shard. The Shard increased Spirit Lance illusion damage by 50% (taking it to 70%), increased cast range and bounced on a secondary target. Overnight, it went from an optional item to a completely necessary one on PL. The nerfs from patch 7.29b focus on making the Shard balanced, even though it is still a strong one. 60% illusion damage is a good chunk of damage, especially after PL has built up some good stat items like Eye of Skadi and Butterfly. The nerfs to his Aghanim’s Shard and Phantom Rush agility bonus should hold him back a little, while still maintaining his status as a strong carry. The effect of the new changes is already beginning to show in pubs, as his win rate, which steadily increased throughout the week after patch 7.29 was released, took a plunge after the release of patch 7.29b. 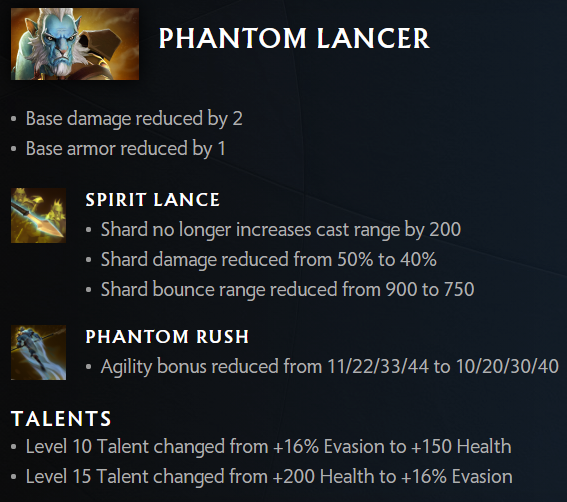 The biggest surprise of patch 7.29b patch the lack of nerfs to Beastmaster and his Wild Axes. The talent damage for the Axes was reduced by 10 (from +40 to +30), but that barely puts a dent in a hero who is terrorizing pubs and professional games alike through the mid lane. He is banned nearly every pro game and in the games he is picked, has an 80.95% win rate (17 wins in 21 games). Granted that Beastmaster, like Lycan, lost Necronomicon, which was his bread and butter. But IceFrog has provided him with French toast to replace it (or whatever your favourite breakfast is). There are bound to be more nerfs for Beastmaster in the near future.

The second set of surprising changes are small buffs to Death Prophet, Monkey King and Nature’s Prophet. These heroes dominated patch 7.28 and Season 1 of the DPC Leagues, and it is high time they sit out for a while. But there is a good chance those are the heroes IceFrog and GabeN spam in pubs to get that precious MMR, which is the only reason they have received slight buffs in patch 7.29b.

Doom and Lina received sizable buffs and should be seen a lot more in the games to come. Huskar on the other hand, was left on the wrong side of the patch and should be less of a terror in the mid lane. The patch will be on display right away as the Season 2 of the DPC Leagues continues. As the new meta develops and more stats become available, GosuGamers will bring you a detailed analysis on which heroes look good in the long run, heading to the second DPC Major of the year.

Do you like the balance changes from patch 7.29b?