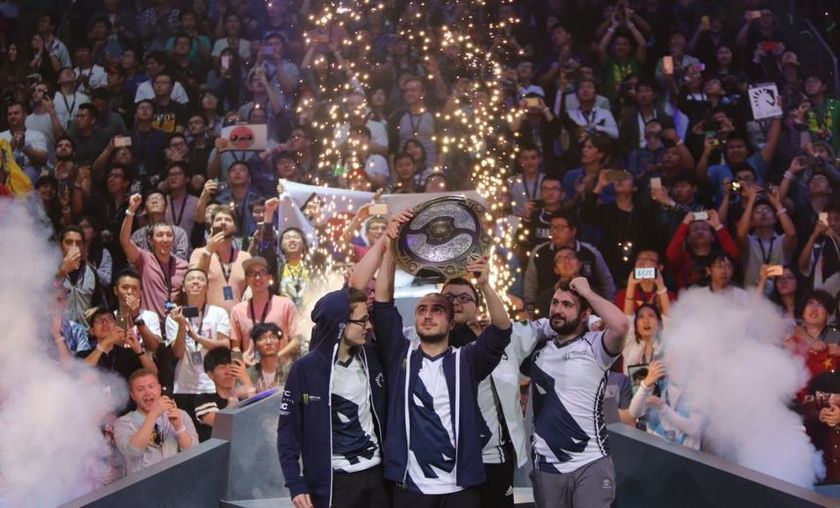 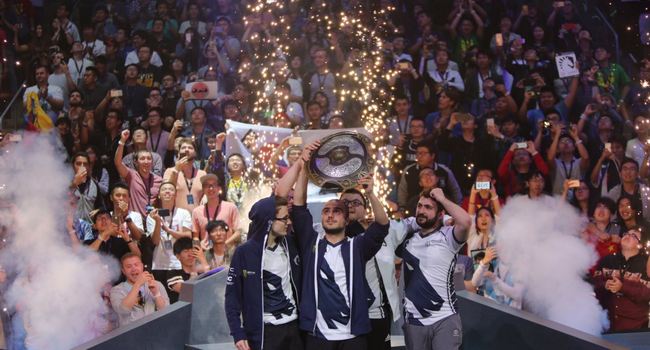 After dropping to the lower bracket and going through a number of tough series, Team Liquid brought on their best game in the grand finals against Newbee, whom they beat 3-0 to take the title of The International 2017.

After two weeks of gruelling Dota, the community finally witnessed the rise of a new champion in the form of Team Liquid! Liquid were crowned the TI 7 champions after they swept aside Newbee in the grand finals and forever cemented their place amongst the elites! What was so special about this run of Team Liquid? It was the first time in the history of The International that a team came back from the second round of the lower bracket and won the whole thing. Before this, all the teams that have won have been a part of the upper backet finals. This is also the first time that a team has won with a clean sweep, i.e., 3-0 scoreline, in not just a TI grand final, but a Valve grand final. Liquid have rewritten the hisory books with regards to more than one aspect! Let's take a look back at how the games proceeded:

Anyone who hasn’t seen the first five days of TI 7 would have a hard time believing they were the ones who came unscathed through the upper bracket. The Liquid draft seemed a bit greedy with Troll Warlord, Lifestealer and Nature’s Prophet in their ranks, three heroes that require a decent amount of farm. But playing passively was the last thing on their mind! Ideally, Lina would have a decent lane in the mid against a Troll. But a Amer 'Miracle' Barqawi Troll with a Kuro 'Kuroky' Salehi Takhasomi Lich, things are different! Liquid grabbed the first blood on Damien 'kpii' Chok’s Batrider with Maroun 'GH' Merhej and Ivan 'Mind Control' Borislavov and quickly followed it up with a mid lane courier snipe and kill on the Lina with NP joining the fray. From then on, they never really let their foot off the gas pedal. Mind Control and GH were literally present all over the map. There was a slight slip off when Batrider revealed his dagger, got a Lasso onto the Troll and Slardar crushed the ground. Other than that, it was quite a flawless game for Liquid. Mind Control’s NP has immaculate throughout the tournament and he made a strong point to Newbee just why they should consider banning it. Liquid racked up a 20k net worth lead in 27 minutes and with 2 sets of racks down, Newbee three in the towel.

Valve can nerf Alchemist all they want, but it’s in the best interests of everyone to not underestimate him. Especially when Miracle is playing the hero. Newbee were out for blood and revenge after a humiliating first game defeat and it seemed that was just what they were doing! Starting with an 8-0  lead in kills, Newbee completely managed to shut down the Alchemist killing him twice in the laning phase. The Chinese team were dominating Team Liquid with the Anti Mage farming on his own. Maybe it was Newbee getting a bit overconfident, maybe it was Liquid playing a cautious game and getting the perfect pickoffs, but the tides turned.

Liquid had the perfect pickoff tools with Fissure, Ice Blast, and the Reaper’s Scythe. The key moment was probably when Liquid sneaked a Roshan and then followed it up with a two for three exchange in their favor with Kuroky being denied by Mind Contol. In the high ground defense that followed, kpii jumped in to duel Matumbaman, but all he did was trigger the Necropos' Linken's Sphere and before kpii knew what was happening, he had lost a lot of HP with the Sythe on him! Anti Mage died to the ticking Ice Blast damage and had to buy back and while the Alchemist died as well, he had the aegis! Eventually, they did bring Miracle down, only after he had destroyed the bottom melee racks and Newbee’s spirits. Newbee tried to get him down ealy in the next defence with kpii going in with a duel, but all he ended up doing was giving the Alch extra damage. Newbee called the ‘gg’ just before losing the second set of barracks, knowing the Alch with his team behind him were impossible to deal with.

With Newbee’s tournament lives on the line, they decided to find solace in a mid laner that most of the Chinese teams have favored throughout the tournament, the Death Prophet. They had had enough of MC’s NP and made sure he didn’t get it in games two and three. But having the huge hero pool that Liquid do, they picked up two heroes that haven’t been seen a lot of times in this year’s TI with Dark Seer and Juggernaut. This game seemed to me a much more even one until a crucial pickoff in the game. Liquid smoked up to find Sccc’s DP near the Radiant Secret Shop. The Omnislash flew and DP used the Eul’s, only to be purged off and sent back to the well. The DP had to extend her buy back for due to that death. In the next fight near the Roshan, Newbee got the jump onto the Jugg and just as they were about to kill him, in came GH with a game saving Echoslam! Juggernaut just survived, popped up his BKB and Liquid made short work on Newbee. The only problem was, this time, Newbee did not have the buybacks available. Liquid marched down with the aegis to get the ‘gg’ from Newbee and become the first team to clean sweep a Valve final!

It's a sad thing that the greatest Dota 2 competition of the year has ended. But it also unlocks the door to a whole new season with post TI shuffles, a new patch with changes and two new heroes! It's going to be a good one!

Do you think Team Liquid have been the best team this entire season or did they just peak at TI?

They were the best this season
Thank you for voting!
There were other teams better than them, they just peaked at the right time
Thank you for voting!
Siddharth “Gopya” Gopujkar
A Mechanical Engineer who is as interested in the mechanics of DotA 2 as every machine he studies. Pursuing his Master's at the Michigan Technological University.
Share Tweet