EHOME is the final team to attend the ESL One New York main event. Although Invictus Gaming has been looking strong in recent matches, EHOME emerged as the victor of the last qualifier best-of- five series, earning themselves a ticket to the first LAN event post TI5.

Invictus Gaming must been loving their Lina. Lina has been picked in the first phase for iG many times in their recent games and has been working quite well for them. Earthshaker was also a solid pick as it secures team fight control and long range stuns. As for EHOME, Tusk being one of the most popular heroes in this patch, was snatched immediately, and Rubick as a respond to Lina and Earthshaker was grabbed in the first phase as well. With Undying, Dragon Knight and Dazzle being picked for iG, we can predict a team fight pushing strategy from them. Whereas EHOME opted for a skirmish-favored line-up with Juggernaut, and Silencer for their last pick to deny Earthshaker’s capability in team fights.

EHOME decided to put Silencer in the mid lane, which is quite refreshing considering that mid matchups have been stale and similar for most of the patch. However, with multiple effective rotations from Chuan, Ferrari was able to take control of mid lane. The only lane that was going well for EHOME was their safe lane Juggernaut. iG began their aggression before minute ten, killing off three heroes and claiming the mid tower. Although Juggernaut has accumulated plenty of farm, EHOME had no solutions to the relentless aggression coming from iG. They were forced to abandon all their outer towers by the 23 minute mark. iG took game one with ease.

Once again, iG took Lina as their first pick. They rotated Lina to the carry position, contrary to the support position which they have been running before. EHOME again snatched the popular heroes Undying and Spirit Breaker looking to solidify their game plan afterwards. Both teams did not have strong lockdowns, thus EHOME opted for Queen of Pain and Ember Spirit whereas iG went for a Slark last pick.

EHOME looked to apply pressure to Ferrari's Templar Assassin by dual-laning mid with Io and Ember Spirit at the first minute to secure farm for Ember. Io's effective rotation onto the top lane applied a lot of pressure to Slark, denying him a lot of farm during the laning phase. Cty's Queen of Pain was left alone to farm whereas Luo's Dark Seer was able to roam freely in the Radiant jungle. After game one's defeat, EHOME realized the importance of shutting down Ferrari and securing the mid lane, therefore they put a lot of emphasis in harassing Ferrari this game.

Cty was able to make good use of his early farm and a successful rotation on top lane by him has secured a significant lead for EHOME by the seven minute mark. iG's lineup did not allow them to contest the Tombstone from Undying effectively, which resulted in EHOME destroying one tower after another. With their built up advantage, EHOME took game two equalizing the series in a dominating 18 minutes game.

This time the draft almost reversed. iG went for the Undying Spirit Breaker combo whereas EHOME took Lina in the first phase. In the second phase iG decided to draft Phantom Lancer for Rabbit, a considerably weaker player on the hero. EHOME immediately responded with a Sven counter pick. EHOME's gank oriented lineup looked to be superior because of all the burst damage. Whereas iG's lineup seemed to lack synergy.

EHOME used the same strategy of using Lina, a strong laner to attempt to shut down Ferrari’s laning phase. iG once again suffered from a weak laning phase as Tusk was able to do relatively well against a solo Phantom Lancer in the offlane, and in the top lane EHOME’s tri-lane dominated the Undying Spirit Breaker duo as well. 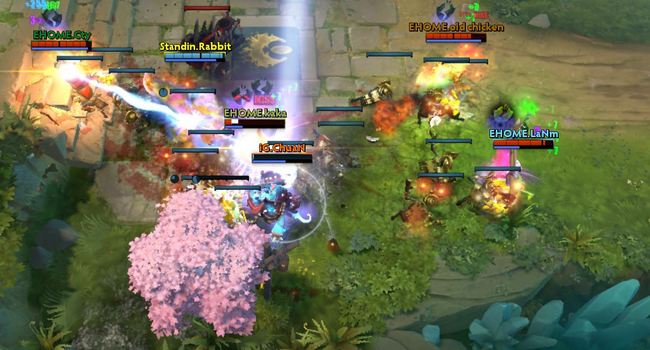 EHOME began to pile on their advantage right after the laning phase has concluded, winning skirmishes all over the map with the damage heavy lineup they have. With constant victories in fights around the map, EHOME was able to initiate counter pushes against iG after taking Roshan. By the 20 minute mark EHOME has completely dominated the game. Although iG was able to cling onto the game by split pushing and the constant spam of Sleight of Fist to defend high ground, their last hope to stay in the game was demolished in the high ground siege of EHOME at the 40 minute mark. EHOME took game three with an ultra-kill from Cty still echoing through the score board.

iG drafted their winning hero against EHOME in the Nanyang Championship qualifiers – Gyrocopter, on the back of an Earthshaker Visage support duo. EHOME again went for Lina and Tusk, two dominating heroes throughout this series. In the second phase iG picked up Dragon Knight and Kunkka looking to solidify their team fight heavy lineup. Whereas EHOME wanted more sustainability and survivability, drafting Winter Wyvern and Bristleback.

EHOME once again displayed their complete dominance in the laning stage taking advantage of an awkward offlane Kunkka. They were able to grab two kills simultaneously in the top and bottom lanes before the two minute mark. iG was able to retaliate with a reverse kill on an over-extended Bristleback in the mid lane, but came at the cost of a three-heroes rotation. iG’s laning phase went slightly smoother than the last two games, they were able to rotate effectively to make up for their laning disadvantage. The game quickly took a turn for the worse for iG at the 14 minute push in the middle lane. iG had no means to deal with a 1700 hp Bristleback thus getting team wiped.

After that fight EHOME cruised along the bottom lane taking two towers and then secured Roshan, gaining a decisive lead. Although iG was able to deny an aegis push for high ground from EHOME, their poorly executed smoke at minute 20 resulted in a team wipe by EHOME, killing off all the core heroes on the side of iG. iG was unable to come back from the gold deficit resulted in this fight, and EHOME takes game four and the series altogether displaying dominance in their victories.

EHOME’s solid performance in this game brought many surprises to the audience as they were regarded as the inferior team after the chaotic reshuffle. However, iG will still have a chance for redemption in the Nanyang Championship China qualifiers finals which will be played later today.