Na'Vi takes down iG to become the second Alienware finalist.

Natus Vincere managed to beat Invictus Gaming for the second time this month, earning themselves the ticket to the grand final of Alienware Cup. The International 2 champions complete the cup placing third, and will bring home $7000.

The Ukrainian superstars will now move to the grand final to face LGD.cn. WIth their loss in the Winners Bracket final, it will be interesting to see whether Na'Vi can come up with a way to stop LGD.cn and earn the gold in Alienware cup.

Alienware Cup will conclude tomorrow, July 9, with the grand final between Na'Vi and LGD starting at 13.00 CEST. It will be a best-of-five match and will determine the winner of the tournament. It is safe to say that Alienware cup is one of the last indicators of how well the teams are prepared for The International 3, and the battle for the grand prize of over one million dollars.

It seems iG has started using more and more push-oriented line-ups, and they used the same srategy against Na'Vi. This time, they modified their line-up to boost their global ganking presence. However, the Chinese were unable to control Natus Vincere's farming capabilities. The Ukrainians, using three fast farmers (Alchemist-Enigma-Bounty Hunter) were able to recover from iG's constant pushing, and force the teamfights on demand. XBOCT's Alchemist was able to reach an impressive 835 GPM, aided by KuroKy and Funn1k's exceptional performance. 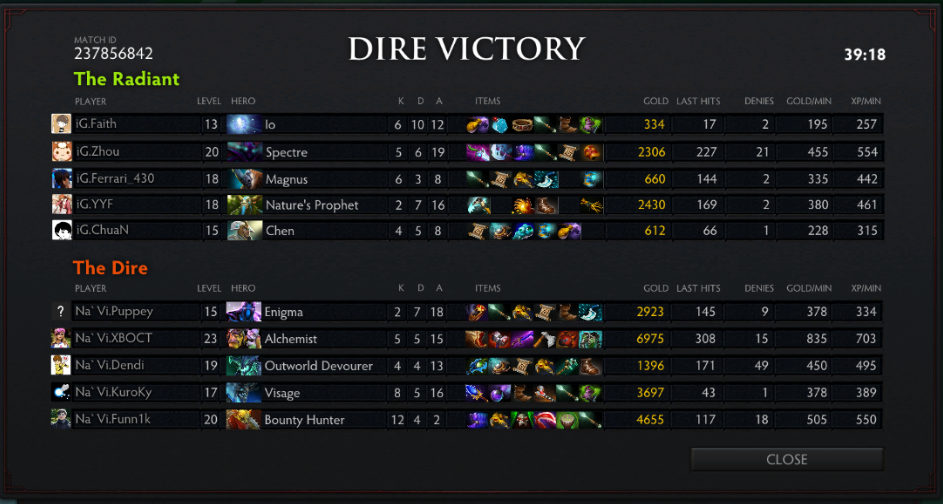 Natus Vincere trusted Alchemist once again for their hard carry, and the Chinese immediately responded with two crucial pickups - denying the Puck from Dendi and selecting the strong but recently-nerfed Phantom Lancer. The line-up seemed to work well for iG, helping them control the map during the early game, giving only a few sloppy kills to the Ukrainians. However, the tides were turned quite easily thanks to the phenomenal play by Sir Daniil 'Dendi' Ishutin and his shotgun build. Na'VI breached the Dire base by minute 36, getting two uncontested sets of barracks with iG unable to properly respond. It took Puppey's boys a bit more time to get the super creeps, as the Chinese' lineup was pretty durable in defense. Nevertheless, a Roshan kill and a 4-0 did the trick for the Ukrainian superstars, giving them their second consecutive win in this b-o-5. 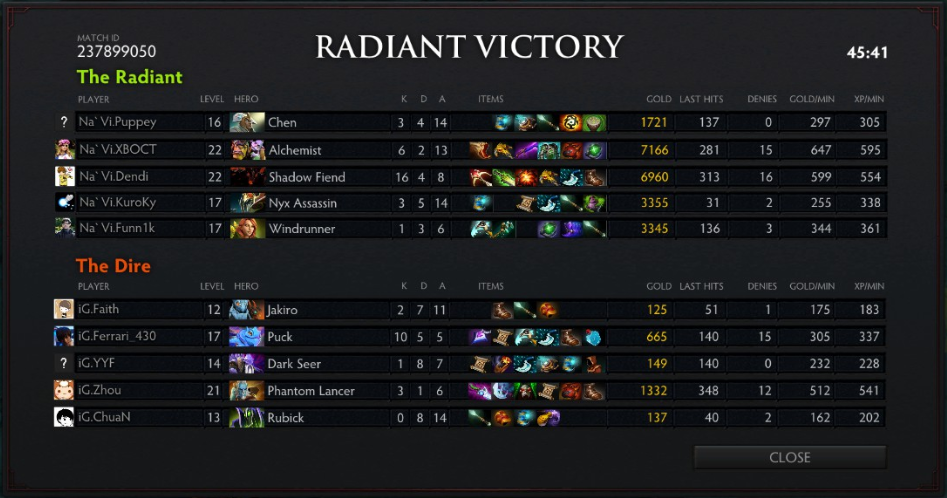 Dendi was unable to repeat his previous performance, as his early game was shattered by the Faith-Chuan-Ferrari trio. Faith's Treant Protector was a constant defensive barrier for his teamates, disabling the ganking potential from the Ukranian line-up. Eventually, Dendi was forced into Arcane Boots to support the weak mana pool, and the lack of Orchid Malevolence crippled the Storm-Naix combo Na'Vi was planning to abuse. In the end, Zhou's Antimage was too big to handle, handing his team their first win today with a score of 29-10. 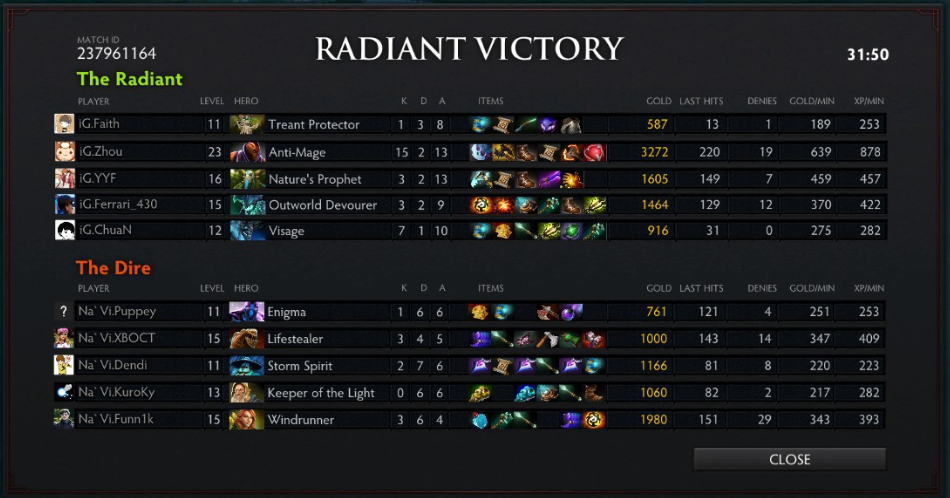 Invictus Gaming, judging from the success of their previous draft, selected Antimage once again for Zhou. This time, the Ukrainians were prepared for what was coming, and selected Dragon Knight for Dendi, with great success. Na'Vi's aggressiveness was really high from the beginning to the end, greatly limiting Zhou's Antimage farming potential. Funn1k did an amazing job isolating enemies, further improving the Ukrainian kill capabilities. In the end, the Radiant completely destroyed the enemy base by minute 30, winning the forth and final game along with the ticket to the grand final. 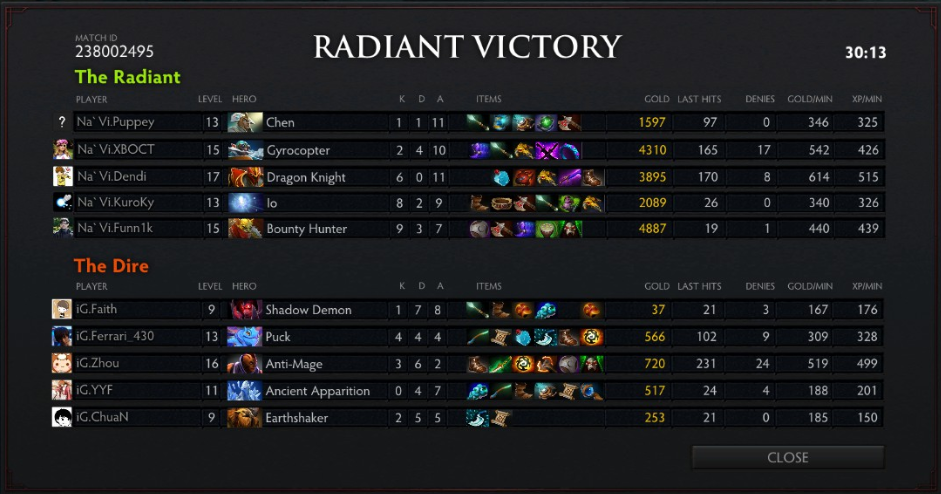 Andreas “drouks” St
There's really not much to say about Andreas 'drouks' Stavridakis, except that he sleeps two hours a day, plays the guitar and survives solely on Diet Coke. He also writes about DotA sometimes.
Share Tweet
110 people reacted to this post