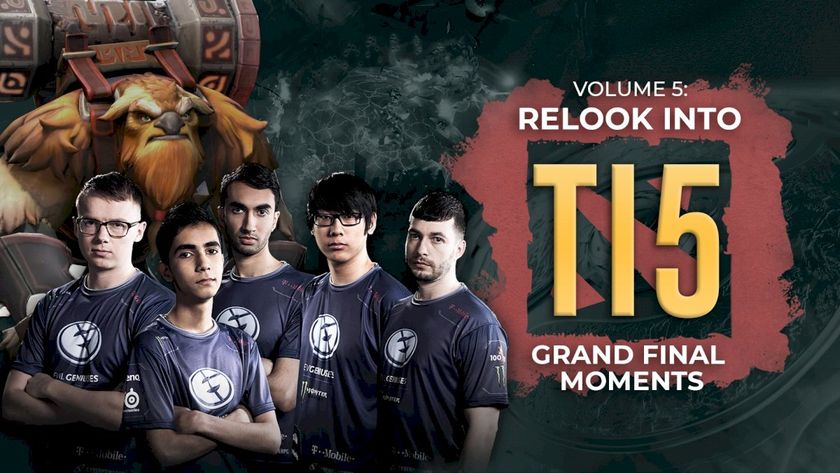 During the weeks leading up to TI10, GosuGamers will be taking a closer look back at the meta for each of The Internationals through the years. This week is TI5.

The first four iterations of The International had alternate winners from EU and China. The tournament had moved to North America from the second year, but the NA Dota 2 fans were still yearning to see the Aegis to come to their neck of the woods. The International 2015, or TI5, would be the one that granted them their wishes.

TI5 was held at the Key Arena in Seattle, the venue that would go on to host all Tis till TI7. The prize pool for the tournament, thanks to the TI5 compendium, had gone up to a little over $18.4 million from $10.9 million from the previous year. The prize pool distribution was a little less top heavy, with the winner  getting 36% of the TI5 prize pool as compared to 46% for TI4. But even with that reduction, the TI5 winner’s money bag was around $1.6 million more than that for TI4 due to the overall prize pool increasing by around 80%.

After the abysmal format for TI4, which possibly didn’t get any applause, Valve decided to revert back to the old way of having two small groups instead of one big group. There were a total of 16 teams-

●        4 qualified from each region (China, Americas, Southeast Asia and Europe)

The two groups had 8 teams each, with every team playing a best-of-2 against every other team in their group. The top 4 teams went to the upper bracket, while the bottom 4 teams went to the lower bracket. No teams were eliminated from the group stages, which was a massive change from TI4, where 6 bottom teams from the group stage didn’t have a spot in the playoff bracket.

The final in 2015 was expected to be Evil Geniuses versus Team Secret. The two teams had dominated the tournaments prior to TI5, but The International is a whole different animal. Also, everyone knows Team Secret does not have the most amicable relationship with The International championships.

CDEC Gaming was one of the  teams, along with MVP Phoenix, who made it to the group stages from the wild cards. So no one expected them to annihilate everyone in their path and make it to the TI5 grand final! But that is exactly what they did. Their opponents in the grand final were the NA home team, Evil Geniuses, who were expected to be there, but had to come up through the lower bracket after being destroyed 2-0 by CDEC in the upper bracket final. So heading into the grand final, CDEC had a slight upper hand mentally, knowing they had comfortably dispatched their opponents earlier in the tournament.

TI5 was played on the 6.84c patch, which was a few patches ahead of 6.81b, the patch on which TI4 was played. Let’s take a look at the general changes between that time which could have had a significant impact on the game play.

●        Two runes now spawn in the river every two minutes. One of them will always be a Bounty Rune

-The biggest change that Valve and IceFrog needed to make was changes to gold and XP, including AoE gold and XP for kills, gold earned for First Blood and ending streaks and also from buildings. The reason for that was TI4 had been the most underwhelming TI of the first four because of the death ball meta, and the inability for the team that fell behind to make a comeback. IceFrog tinkered with the gold formula for kills a lot before going into TI5, and the time between TI4 and TI5 was when the net worth factor was introduced, as well as the comeback factor, which ensured the team with lower net worth would get more gold for kills.

-This was the first TI that saw Bounty Runes, and with a rune spawning both sides of the river every two minutes, it changed the dynamic of the mid lane.

-This was also the first TI where the damage types in the games had been updated to be only of three types – Physical, Magical and Pure.

One of the biggest changes going from TI4 to TI5 was the location of the Roshan pit on the map. For the first four TIs, it was on the lower Dire side, opening up in the direction of the Radiant bot tier 1 tower. Dota 2 patch 6.82 changed it, still keeping it on the lower Dire side, but changing the opening to face the Radiant mid tier 2 tower. Roshan is a massive objective in the game, and a location change would have required teams to recalibrate how they approach fights near the Roshan pit. The new Rosh pit played a big role in the iconic moment of TI5, the $6 million Echo Slam; it wasn’t location that led to that moment. 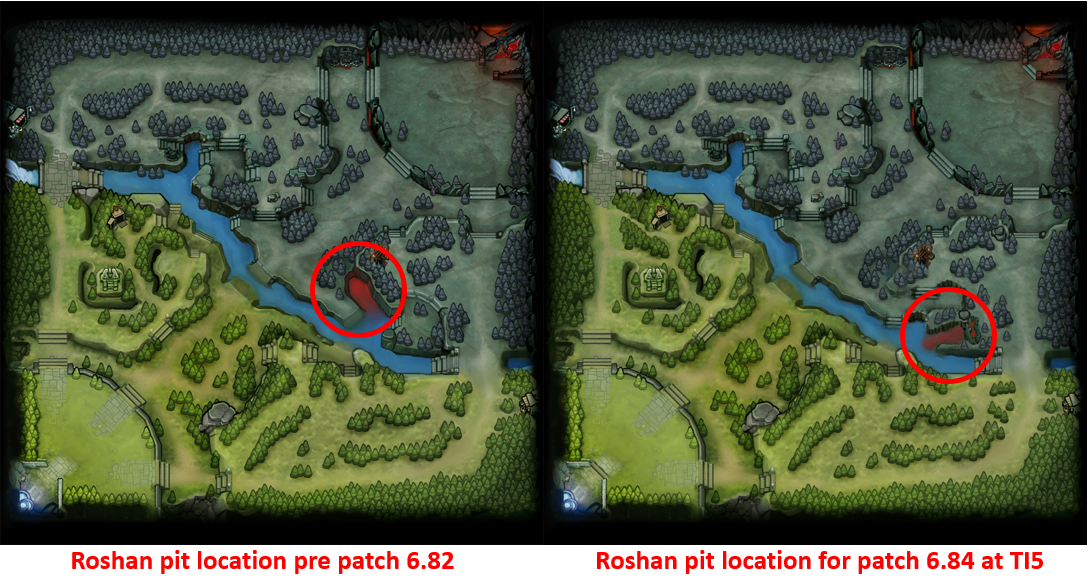 The ban and pick phases for TI5 were similar to the ones at TI4. No changes had been made in that area. First pick still continued to be strong, having the first pick of the game and the last pick of every pick phase.

●        The meta for TI5 was a lot more forgiving than TI4. Even if teams fell behind, they could make a comeback.

●        While certain late game carries were picked, most of the carries picked by teams were ones that could fight early with the team. Fear played Gyrocopter in all four games of the grand final, while Agressif played a safelane Queen of Pain in the one game that they won.

●        Techies and Bounty Hunter were banned in each game of the grand finals. Naga Siren was banned in the first three games, but made it through in the last phase. Both, Techies and Naga Siren, were Aui heroes which no one wanted to face.

●        In every game, Radiant had the first pick, meaning teams either chose first pick or they chose Dire. This was a trend similar to TI4. The location of the Rosh pit gave Dire a slight advantage, while the first pick was better as it gave the team the first and last overall picks of the game.

●        TI5 was a tournament where trilanes were prominent, and depending on the lineup and the priority of a core in the lineup, teams went for trilanes quite often. 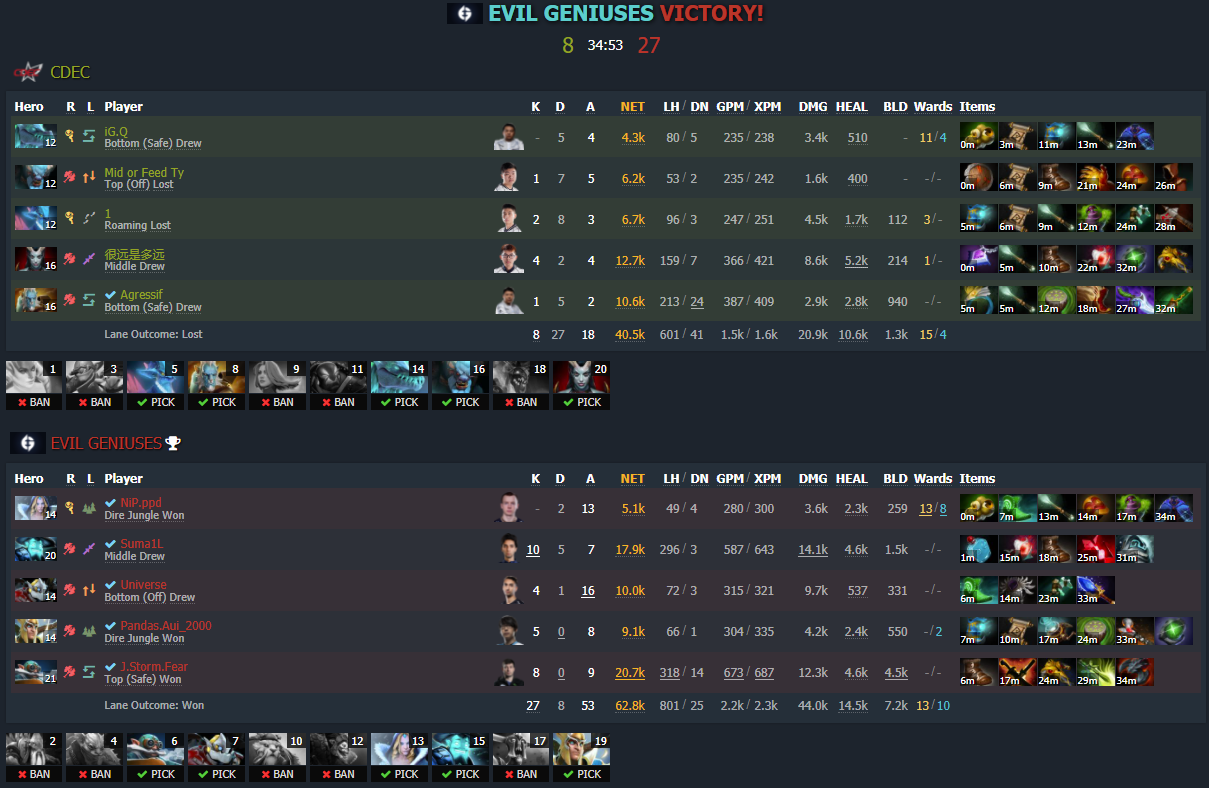 The first game of the TI5 grand final was the shortest of the series at 34:53, but was significantly longer than the longest game of the TI4 grand final at 24:50! IceFrog and Valve had successfully made the games longer and more exciting in the one year they had to work with.

Even though all five players got involved in fights from early on, there was less impetus for congregating and keeping at it, as hero kills and building gold was a lot lesser than the year before. So cores had to find the right mix of fighting and farming.

Glimmer Cape and Guardian Greaves were support items that had been just introduced to the game with Dota 2 patch 6.84, and were very popular in professional games. They were seen quite often, with teams sometimes getting multiple Glimmer Capes due to its cost effectiveness and magic damage mitigation. Back then, Glimmer cape gave 55% damage reduction on the active as compared to 45% today, as well as a bit of attack speed for the player possessing it, which helped supports a bit with farming waves. 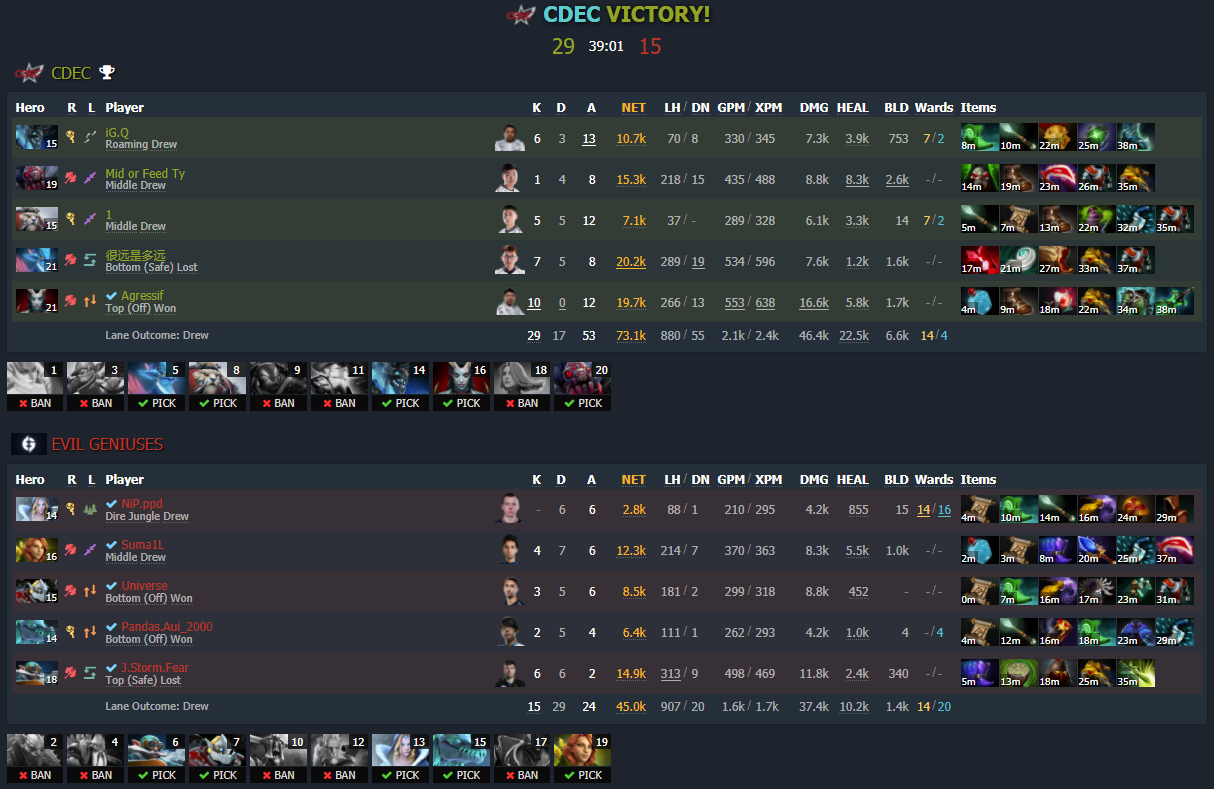 Games 2 and 3 were good indicators of the comeback aspect. The net worth was always in favor of CDEC, but there were times where EG were able to make small comebacks and pull back the net worth. This is what made for exciting games, as viewers did not have an idea of what would happen in the team fights (which is how it should be). The outcomes of team fights depended on who got the jump on whom and the angle of approach.

Helm of Dominator back then provided lifesteal and damage, and upgraded to Satanic, which made it a core item for Gyrocopter.

Winter Wyvern was a very popular support back then, because Winter’s Curse ensured a long lockdown on a target, on whom all of Wyvern’s allies could dish out damage, not just Wyvern, as it the case today. 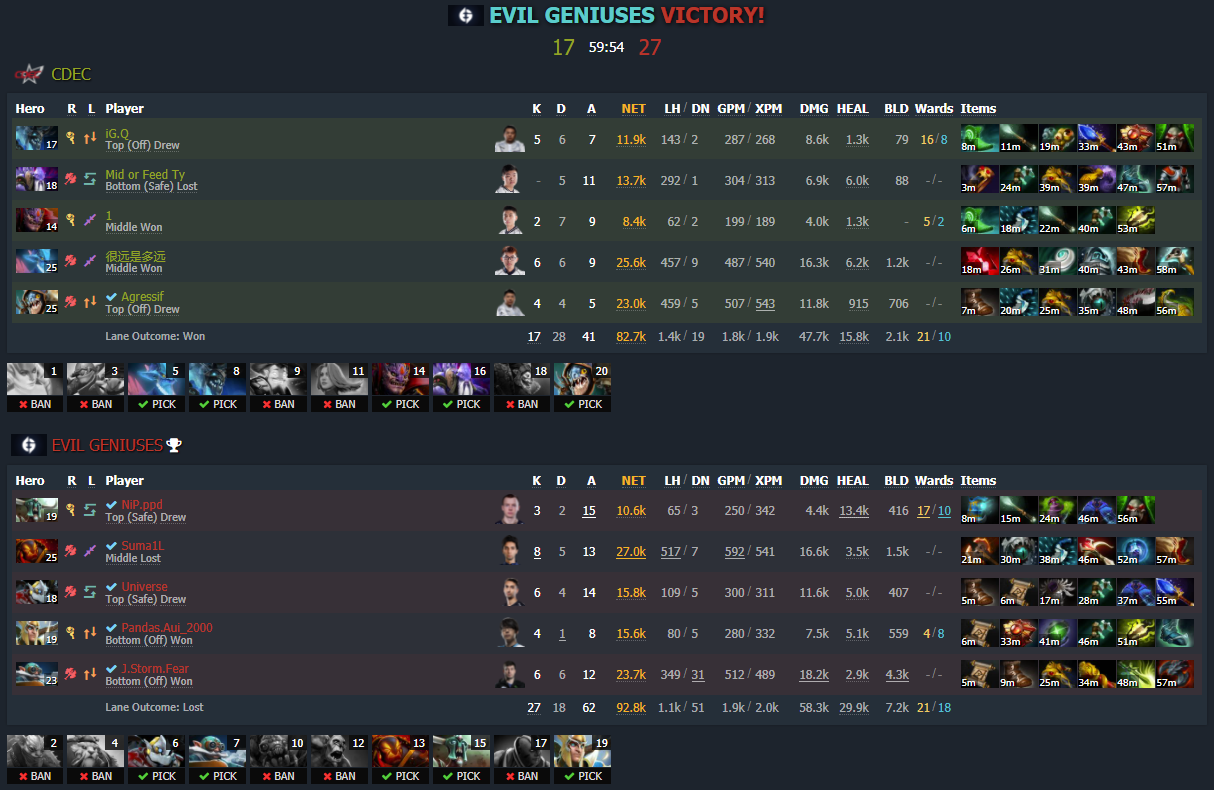 Game 3 was the closest game of the series, with the game going back and forth for its entire duration of nearly an hour. Even though EG ended up winning it, the net worth was in favor of CDEC till just before the last fight, which is testament to the fact that IceFrog had found the perfect formula for brewing interesting back and forth games.

EG were quite comfortable with being flexible with their position role. In this particular game, SumaiL took over the position 1 role, playing an Ember Spirit with Battlefury in the mid lane. 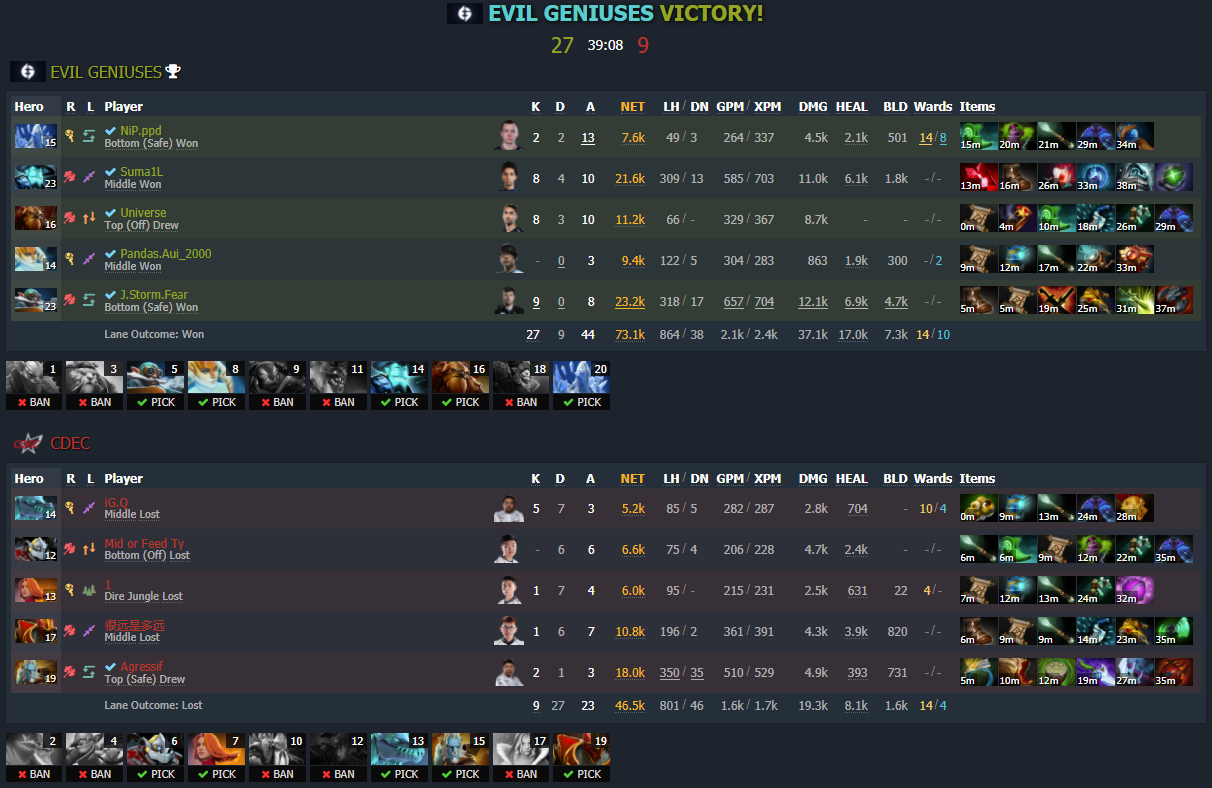 While the last game wasn’t the most exciting in terms of the back and forth and closeness of the game, it did provide the history books the $6 million Echo Slam from Universe’s Earthshaker, with help from ppd’s Ancient Apparition. Later on, ppd mentioned the AA was a spur of the moment pick, with the hero not being too popular in that meta with only 9 picks (5 wins) at TI5.

Tusk was the biggest thorn in EG’s side when CDEC defeated them in the upper bracket final, and EG had it banned in all three games they won in the grand final.

The last game was a comfortable one for EG, and they subdued their opponents in 39 minutes to win game 4, win the series 3-1, and claim the Aegis for North America for the first time in the history of The International.

The GPMs for the two teams weren’t two far apart, and the average GPMs were higher than the previous Tis, indicating farming was getting higher priority. The addition of Bounty Runes helped in raising the GPMs, even though back then, a Bounty Rune provided gold and experience only to the hero that picked it up.

With that, we come to the end of the deep dive into the grand finals of TI5 to see how the meta and playstyle compare to that of today. The TI5 meta made for some exciting games, including a significantly exciting grand final as compared to TI4. Next week, we’ll take a look at the contest between Wings Gaming and Digital Chaos in the TI6 meta analysis. 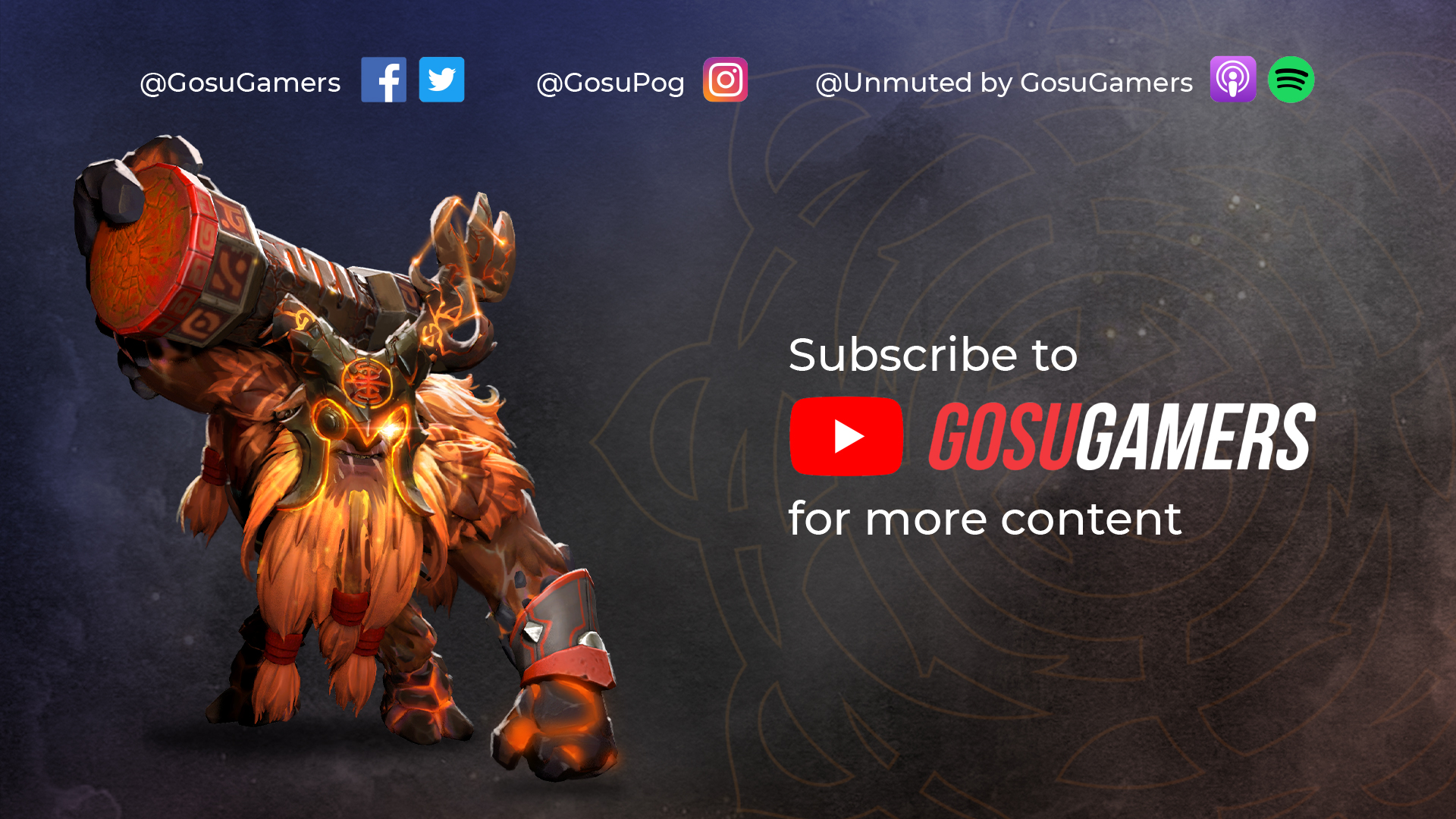 Can Evil Geniuses repeat the TI5 feat again at TI10? 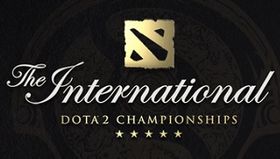