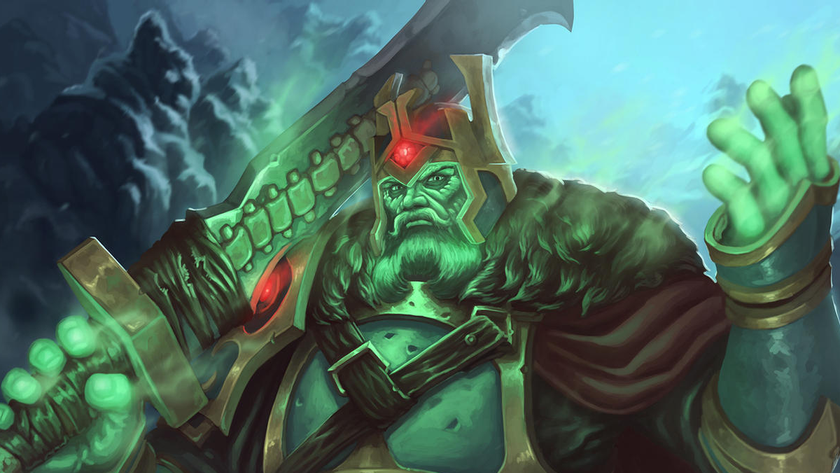 The first DPC Major of the year is upon us and you may be wondering which heroes might dominate the event based on what we've seen in the DPC Leagues.

It seems like just yesterday that Dota 2 patch 7.28 was released and the concept of Aghanim’s Shard was thrown into the chaotic world of Dota 2. A lot has progressed since then, with the entire season 1 of the Dota 2 DPC Leagues done and dusted. A total of 804 games were played in season 1 of the DPC Leagues over all six regions. Teams went into the initial weeks learning a lot about the new meta and evolving with it, but after the first couple of weeks, the meta stabilized a bit with certain heroes standing out in comparison to others. The first DPC Major of the year, the ONE Esports Singapore Major, is less than a week away and with no major patches in between the leagues and Major, it is a pretty good assumption that the heroes we saw dominating the DPC Leagues will be the heroes that will be seen a lot in the DPC Major.

Let’s dig a bit deeper to see which heroes were given preferences in picking, banning and which ones were completely shunned in season 1 of the DPC Leagues.

Puck is the standout performer of Dota 2 patch 7.28. A hero that was ignored for quite a few of the previous patches, Puck got substantial buffs in patch 7.28 and will be one of the key heroes to take into account as teams prepare for the Singapore Major. Along with the buffs, the new item, Witch Blade, synergizes extremely well with the right click build for the hero, which is what a lot of mid Pucks tend to go for. But the best part about Puck is its versatility. The hero has been played as a mid, offlaner and even as a support. So when it pops up on the drafting screen, even though it is a good assumption that the hero will be going to the mid lane, teams have the option to make a change if they deem it necessary looking at the draft. Of the hero’s 284 picks, 240 (84.51%) were in the first pick phase! Teams aren’t afraid of getting countered and if it does get hard countered, there is always the option of a lane switch.  The hero has an above average win rate of 53.52%, which isn’t staggering, but at this point, it has become a comfort pick for many teams.

Void Spirit is the second name on the list and he offers a lot of the same benefits as Puck – initiator, burst damage, tempo controller, escape artist and even an AoE silence when he has the Aghanim’s Scepter. On top of that, he’s just as versatile as Puck as, being played in all roles except safe lane carry (interestingly, Team Liquid’s Michael 'Micke’ Vu has played both Puck and Void Spirit in the safe lane in the EU DPC League). Void Spirit hasn’t received any major buffs as such in the recent patches other than the addition of an Aghanim’s Scepter and Aghanim’s Shard. Even though his pick rate has been high ever since his inception in CM mode, his win rate was low in most of his initial patches. It seems Inai has finally found a patch more suited to him and we can also expect to see a lot of him in Singapore.

The safelane carry making all the headlines is Wraith King, who has risen from the dead (pretty, typical of him, eh?) thanks to the buffs in Dota 2 patch 7.28. The biggest one, possibly, has been Mortal Strike been converted from a luck based crit to a time based crit, which has made life in the lane a lot easier. He also has one of the better Aghanim’s Shards in the game. The effect of the buffs is quite evident as he isn’t only the most picked carry, he is also the carry with the highest win rate (amongst carries picked in at least 20 games), nearly reaching 58%.

The heroes with the highest win rates – Phoenix, Beastmaster and Earthshaker – emerge towards the bottom of the list. Phoenix leads the pack with a win rate nearly hitting the 65% mark in 153 games. Earthspirit, Rubick, Shadow Shaman and Grimstroke find themselves on the wrong end of the win rate spectrum, with Grimstroke significantly lower than others at 36.20%. Teams might give it a second thought while picking up these heroes in the Major.

The most picked list doesn’t always give the best idea of the heroes professional teams think are the strongest in a patch. A lot of times, certain heroes hardly ever make it to the pick phase of drafts because of getting banned in the first phase of nearly every game. Looking at the lost of most contested heroes provides a better idea of that, and the list below shows the 15 most contested heroes in the DPC Leagues Season 1. Puck dominates the most contested heroes as well, with the hero being contested in an insane 91.42% of the games. If Puck isn’t banned, there is a good chance it will be picked. Three other heroes that have been banned in more than half the games are Nyx Assassin, Batrider and Beastmaster, which explains their relatively low pick rate. Batrider though has fallen slightly out of favor ever since his nerf in Dota 2 patch 7.28c, which has taken away the strength of the mid Batrider. An interesting thing to note is that Wraith King is far from the most banned carry. Monkey King, Troll Warlord and even Lycan have more bans to their names than Wraith King, bringing light to the fact that teams aren’t too afraid to play against Wraith King, even though the hero has higher win rates than the other three.

The five best hero pairings in terms of win rate (at least 20 games) have been shown below. While not all of them have obvious chemistry between them, the Phoenix-Mars combo do have ultimates which when used together, can be extremely destructive for the opposition in team fights. Phoenix has an easier time targeting his spells on any enemy who has been caught in the Arena of Blood. Mars’ win rate is just 48%, but it goes to show that with the right heroes around him, it can be a good pick. The Troll Warlord-Oracle has always been a popular combo since Troll’s Berserker’s Rage was changed. Using False Promise just as Berserker’s Rage is about to end makes Troll unkillable for 16.5 seconds.

With the celebration for certain heroes that make it big with a new patch, there is also a mourning period for the heroes that are ignored in the new meta. The heroes shown below are the ones that have been picked in less than 20 games, and it seems like there are certain names in this list irrespective of what changes are made to them. Chaos Knight, Dazzle, Huskar, Luna and Necrophos have been missing from the professional meta for quite a while now. In the initial days of patch 7.28, it seemed that Tinker might be a hero making a comeback, but that hasn’t been the case. Necrophos is the only hero which hasn’t been picked in a single game across the six regions, and if IceFrog is watching, he really needs to shower some love on the necromancer. Perhaps bring back the no buyback Reaper’s Sythe?! Nah, that’s just too sinister! But hopefully when Dota 2 patch 7.29 does arrive after the Major, these heroes will see good enough improvements to be regular picks in season 2 of the DPC Leagues.

The graph below shows the distribution of games based on game duration. The average game duration for the 804 games of the DPC Leagues Season 1 was 36:40 with a standard deviation of 10:08. The graph below shows that nearly half the games concluded in the 30 to 40 minute duration bracket, with the adjacent brackets (20-30 minutes and 40-50 minutes) having the exact same number of games. With around 31% of the games going past the 40 minute mar and only around 24% ending before the 20 minute mark, it isn’t surprising that teams aren’t opting for fast paced drafts like the ones seen in the death ball meta of patches 7.25 and 7.26. The meta that has developed with patch 7.28 is slightly faster than one for patch 7.27, where a higher number of games were finished before the half hour mark. 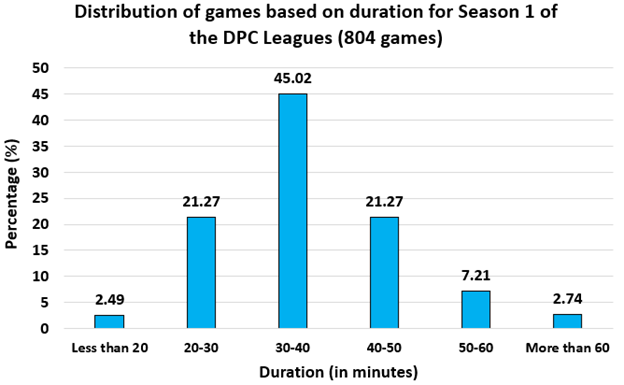 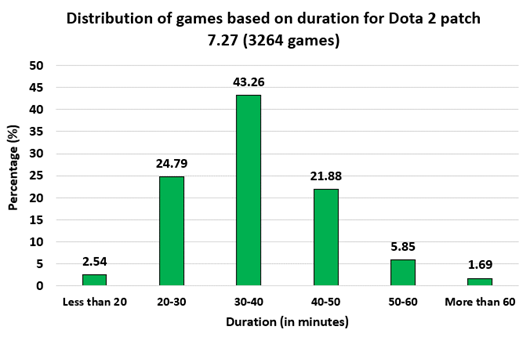 With there being a month long break between the end of most of the regional leagues, a few new heroes are bound to pop up, especially in the initial rounds. In prominent tournaments like Majors and Tis, a small tournament meta develops within the existing meta based on what teams make it to the playoffs and how heroes perform in the early rounds of the tournament. While there is a decent chance that some new heroes and strategies will show up, the majority of heroes will be from the top picks we saw above. But no need to theorize, as we will start to unveil the mystery from the 27th of March, when the wild card games begin.

Do you think we'll see a lot of new heroes in the Major?

Yes, teams will have developed new strats
Thank you for voting!
No, mostly the same heroes that were seen in the DPC Leagues
Thank you for voting!
Siddharth “Gopya” Gopujkar
A Mechanical Engineer who is as interested in the mechanics of DotA 2 as every machine he studies. Pursuing his Master's at the Michigan Technological University.
Share Tweet
81 people reacted to this post