The data for this article was taken from datDota.

The first season of the DPC Leagues is done and dusted with China recently wrapping up their last bunch of games in the second week of March. With all six regions now in the books, the 18 teams travelling to Singapore for the first DPC Major of the year have been decided.

Other than the regional league's format, something that was unique to the DPC League Season 1 was Aghanim’s Shards. Introduced in Dota 2 patch 7.28, just weeks before the leagues began, teams had to learn about the potential of this new item as they vied for a place in the Major or in the upper-division.

With a total of 804 games played in all the league games across the six Dota 2 regions (North America, South America, Europe, CIS, Southeast Asia and China), a lot of Aghanim’s Shards were picked up. Let’s take a look at the Aghanim’s Shards that were deemed the best of the lot by the professional players and teams, which are also possibly the ones we will get to see a lot at the ONE Esports Singapore Major 2021.

The graph below shows the most purchased Aghanim’s Shards in Season 1 of the DPC Leagues in decreasing order. In order to get a gauge of the Shard pick rate, the number of games each hero was picked has also been included.

The first two heroes on the graphs are the clear outliers. Earthshaker and Nature’s Prophet not only have the highest number of Aghanim’s Shards purchased, but they also have a high pick rate for the Aghanim’s Shard. This is an indication that the Shard pickup doesn’t depend on the game situation, but has become a natural part of the build-in nearly every game. Wraith King, Pangolier, and Juggernaut round up the top five most picked Aghanim’s Shards. 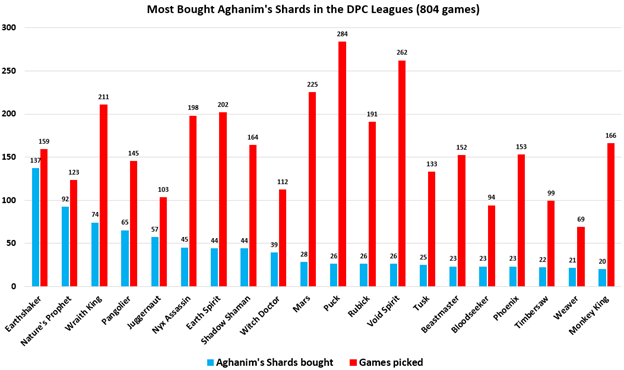 What makes the Aghanim’s Shards of these heroes so good that they stand out from the rest of the bunch? Let’s take a quick look.

Earthshaker can chain stun multiple heroes for 3.25 seconds without ever getting close to them, thanks to the Aghanim’s Shard (using Fissure, Enchant Totem and Echo Slam). Considering Echo Slam isn’t an ability you want to use for keeping a hero chain stunned every time, just Fissure and Enchant Totem is still 2.5 seconds of being stunned (was 3.75 seconds before). For reference, Ravage is a 2.8-second stun. Even landing a two-hero Fissure in every team fight makes the item completely worth it. A few Shards may see some decrease in purchase frequency after the recent nerfs, but the Earthshaker Shard is here to stay, even after the nerfs.

Nature’s Prophet’s Shard gives the hero the ability to spawn two humongous Treants every eight seconds. The two Treants, who have thrice the HP and damage, are more than enough to keep lanes pushed out and the hero doesn’t have to wait until Nature’s Call is off cooldown to teleport to a lane and do his dirty work. The Greater Treants can also be a decent source of damage in team fights against paper heroes.

Wraith King is currently one of the fastest farmers in the game and dishing out 1,400 gold to get free Reincarnation and a few extra skeletons is a no brainer. For games against heroes like Invoker and Nyx Assassin where mana drain is an issue from early on in the game, WK can prioritize a Shard early instead of having to wait till level 20 like before. Past the 20-minute mark is where you'll find the highest number of Aghanim’s Shard pickups for WK in the DPC Leagues. In case his mana isn’t under any threat, he can even afford to forgo it until much later in the game, which is why the pick rate for the Shard isn’t the highest.

Pangolier’s Shard offers him two massive benefits – the ability to start Rolling Thunder without being interrupted and the ability to turn back during Rolling Thunder in case you mess up your roll. Especially before Pangolier has a BKB, the 1.2-second cast delay (or transform time) on Rolling Thunder can be the bane of Pangolier in the middle of team fights. The Aghanim’s Shard is an assurance that the roll begins without any hiccups -- unless the opposition has a magic piercing disable. 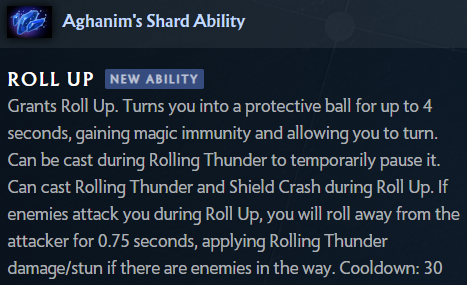 The right-click during Blade Fury gives Juggernaut another significant damage output after using Omnislash, without being kited. Blade Fury by itself doesn’t offer too much damage in the late game, especially compared to a farmed Juggernaut’s right clicks. The additional movement speed during Blade Fury is just the cherry on top of the spinning cake.

Just looking at the number of Shards can paint a false picture for a few heroes, like Puck, who has 26 Aghanim’s Shards pickups to its name, but that’s out of 284 games (which is less than 10%). Certain heroes get picked only in specific drafts, and a look at the Shard pick rate can shed more light on which Shards the pros believe have the most potential.

The table below shows the top 20 Aghanim’s Shards with the highest pick rates (for heroes picked in at least 30 games). Surprisingly (or not!), Earthshaker and Nature’s Prophet manage to top that list too! Earthshaker has a staggering 86.16% pick rate for his Aghanim’s Shard, with the Shard now gaining preference over Blink Dagger and Aghanim’s Scepter in a lot of games.

An unexpected name that pops up in this list is Ancient Apparition, which is picked up mostly as a counter to Alchemist. But considering the fact that Aghanim’s Scepter isn’t as important for him anymore as it used to be, the hero can afford to splurge on an Aghanim’s Shard, which makes Ice Vortex a great source of damage and a way to cancel Blinks in team fights.

A hero that didn’t make the list was Clinkz, as he was picked in only five games. But in all five games, an Aghanim’s Shard was purchased, and he’s the only hero to have a 100% pick rate for the item. If teams figure out a way to integrate him in their lineups, that is one Shard we will be seeing a lot of. 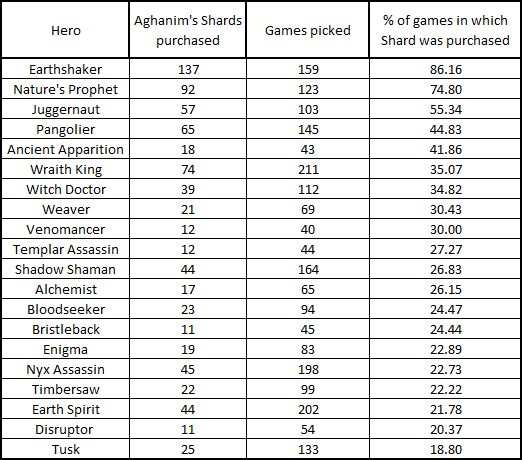 Aghanim’s Shards have introduced a new pathway for hero progression, in a game that already had a multitude of choices, which has made things a lot more intriguing. The decision on whether to invest 1,400 gold on an item that offers no stats and when to do so, is one that can have major repercussions on the game.

With the Major just a few days away and no new patch expected before it, there is a good chance that the Shards seen here will be the ones that continue to be the most popular choices. But there is always a chance that the teams might have figured out the potential of some newer Shards, which might just pop it up as a surprise in the DPC Major. We will just have to wait and see as the first DPC Major, and the first Dota 2 LAN event in quite a while, unfolds in Singapore.

Do you think Aghanim's Shards have had a major effect on game outcomes?

Yes, for sure
Thank you for voting!
No, not so much
Thank you for voting!
Siddharth “Gopya” Gopujkar
A Mechanical Engineer who is as interested in the mechanics of DotA 2 as every machine he studies. Pursuing his Master's at the Michigan Technological University.
Share Tweet
60 people reacted to this post