Cloud 9: "We Will Destroy You"

Cloud 9 is a team who has struggled together through some tough times, but came out on top when the dust settled. Since TI3, this team has played under four different names with the only common factor being success. 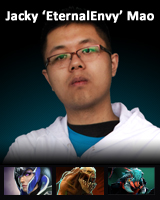 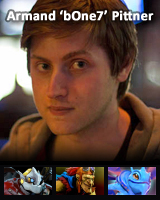 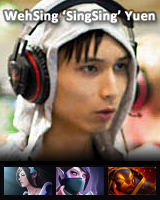 Cloud9 is one of the newer additions to the DOTA scene, but the players under this new banner are all grizzled veterans. Their story begins with the departure of Jacky 'EternalEnvy'  Mao from No Tidehunter. Despite being a founding member of the team Mao was unexpectedly given the boot, as the team wanted to be exclusively Swedish and Mao is Canadian.

“
I strongly believe that the way this incident was handled was awful... I'll try my best to get better and perhaps join a new team.” - Jacky 'EternalEnvy' Mao

EternalEnvy did just that joining Bone7 and Pieliedie on Kaipi. At the time, the team was completed by players ComeWithMe and Arteezy. Kaipi underwent some major roster changes just before The International 3, something considered to be the deciding factor in Kaipi's total exclusion from TI3. After TI3 Kaipi lost Arteezy to his studies and picked up SingSing later in the year.

Things were going well enough for Kaipi when they were approached by the Chinese team, Rattlesnake, who were interested in making Kaipi their international Dota2 squad. During this transition the team also picked up Kurtis 'Aui_2000' Ling.  The team quickly changed their name to Speed Gaming to be better recognized in the community and over the next few months it was met with a variety of results, but were constantly beset by team troubles as well.

One such tumultuous experience involved the manager for Speed Gaming, Marco 'Thyton' Fernandez, a polarizing figure within the organization and the Dota2 community as a whole, who would, among other things, flame his own team after losses. He left all managerial tasks to be picked up by Aui and EternalEnvy, tried to get Speed banned from tournaments, withheld salary payments, threatened Aui, and eventually publicized the players contracts. Fernandez accused the team of trying to lose Dota games on purpose and not trying hard enough,an accusation which Aui and SingSing found mildly amusing.

MLG Columbus was where everything really hit the fan and the public took notice. The European members of the team were not actually given plane tickets, but flight vouchers, giving them a seat on the plane only if there are open seats left, which left them stranded at their respective airports. Aui attributes this along with the absence of any management whatsoever to Speed Gaming's 0-3 start to the tournament. Right before the final Fernandez publicized the players contract via reddit and also essentially announced the team no longer had a sponsor.  Ironically, this had a positive effect on the team, who went on to win the championship, knowing they don't have to deal with internal issues anymore. 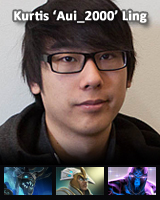 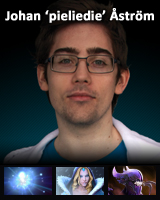 “
Envy pointed out that it actually probably made us play better because we became so much more relaxed.” - Kurtis 'Aui_2000' Ling

Speed Gaming,  went on to win the MLG finals in an amazing display, overcoming Team DK to claim victory. They left MLG still under the Speed Gaming name, sans Marco, and played in China for a month or so, before being picked up by Cloud 9 in February of 2014. This year Cloud9 looks to take Seattle by storm and snatch the Aegis of Champions from EternalEnvy's former team. When asked how, then Speed Gaming, would fare against The International 3 Champions, EternalEnvy had only these words for his former team,

“
We will destroy you.” - Jacky 'EternalEnvy' Mao

Cloud9 is one of the crowd favorite teams as it is full  of players, with whom the Dota community is enamored. They have a very active presence in the community, as they are all frequently streaming during their individual practice time. The team has been scrimmaging for about four hours every day during the past few months.  They plan on stepping up the hours as The International draws near, but they want to be careful not to exhaust themselves. They are on the fence about boot camping prior to The International, as Valve provides a short boot camping period for teams before the tournament.

“
Shoot Arrow, Hit Arrow ”- Weh Sing 'SingSing' Yuen Cloud 9 is known for their "dire advantage" style of play, preferring to take the dire side of the map and valuing Roshan more than most teams. They are also known for their prioritization of Mirana for SingSing much like The Alliance prioritized Natures Prophet for AdmiralBulldog during TI3. Cloud 9 prefers to run a 3 core strategy often with a solo support. In the 6.8 patch, they favored a farming midlane, carry Phantom Assassin, and a blink Dark Seer in the offlane. Their supports are usually micro intensive or gank oriented, both with a blink dagger, like Enigma and Nyx Assassin.
“
Drafting is a lot about flavor of the month or even flavor of the week, I think we will see a lot of different heroes picked ” - Kurtis 'Aui_2000' Ling

The drafting by Cloud9 has always been strange, but never let it be said that their oddness has never achieved the desired results. An unusual pick and a rarely seen hero is Drow Ranger, but she has been a favorite of Cloud9 in the past. EternalEnvy plays a different style of Drow, prioritizing damage over health. An uncommon build for an uncommon hero, EE builds Midas, Mask of Madness, Blink Dagger, Mjolnir, Daedalus.

“
My understanding  of Drow was based on some ideas from RTZ and AUI. The Midas is really nice early, because it gives you levels which greatly benefit your team. I go MoM/Blink after to solo heroes/Rosh or push towers to the limit before blinking away. ” - Jackie 'EternalEnvy' Mao

Their most recent odd draft came on May 26th in the WPC ACE game against Vici. Cloud 9 drafted a Bone7 Spirit Breaker, SingSing Troll Warlord and EternalEnvy Silencer, all of which are among the least drafted heroes in the 6.81 patch.

Cloud 9, in Na'Vi-esque fashion, are using some of their tournament games to practice unconventional builds in an effort to prepare for the upcoming tournaments like ESL One Frankfurt, ASUS ROG DreamLeague, The D2L Western Challenge, and of course The International 4.

“
There are so many tournaments coming up and going on right now...  they are all good preparation for The International ”- Johan 'pieliedie' Astrom

In just a little over a month away, Cloud 9 will be looking to claim their place among the greatest names in Dota. The prize pool waiting for the future TI4 Champions in Seattle has reached an unprecedented $9,000,000 and is still growing. 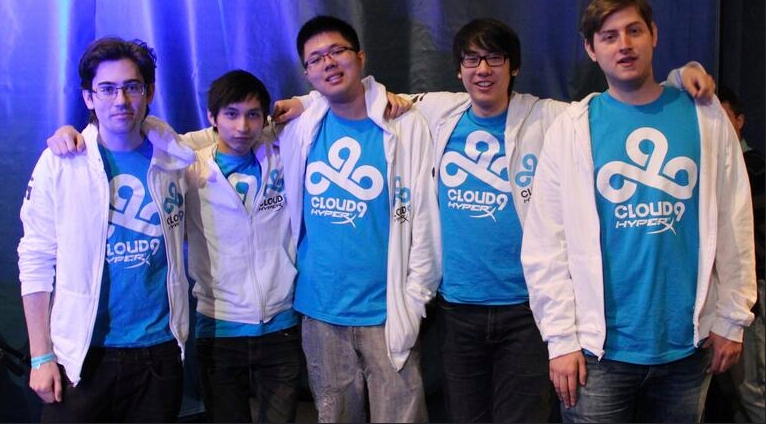 The combination of the biggest prize pool eSports has ever seen and an arena that has almost seven times the capacity of Benaroya Hall has SingSing excited.

“
The prize pool is just huge, every top team is going to be there, everyone tries harder... it's just bigger, the money, the venue, the people... well maybe not the people.” -  WehSing 'SingSing' Yuen

Although Cloud 9 is one of the most formidable teams attending The International, they still have yet to claim a high profile victory under the C9 banner. They took the gold at MLG Columbus as Speed Gaming, but have not managed to claim the top prize in a tournament since. This is nothing to be scoffed at as Cloud 9 has only fallen short to the best.

They failed to take 1st place at the Monster Energy Invitational losing to EG, who came out of the losers bracket to win the Grand Final, in a very close Best of 5. They took third place at the MLG TKO America round robin tournament beginning with a promising 7-0 start in the first leg, dropping to 4-4 in the second leg, before falling to Team Liquid and EG in the final leg, where their record was 1-5. They brought home silver in the second season of the Dota2 Champions League, failing to finish strong again as they  lost to Na'Vi, who came out of the losers bracket. Most recently they took second at Dreamhack Bucharest with a 0:2 loss to The Alliance.

Prior to The International, Cloud 9 is  currently participating in the on-going HyperX D2L Western Challenge, and will participate at DreamLeague and ESL ONE Frankfurt. These three events might allow Cloud 9 to secure a title before they compete for the Aegis of Champions in July. 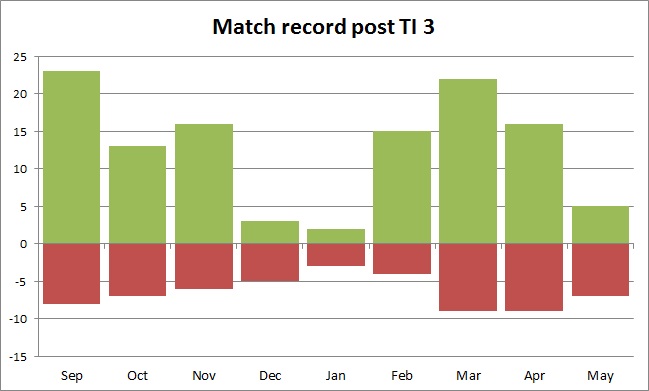 Since it became Cloud 9, the team's record is 51-23, with their win rate never dropping beneath 50%. They were runner-up to Alliance at the Dreamhack Invitational, runner-up to Na'Vi in the Champions League Final, and runner up to EG in the Monster Energy Invitational.  Cloud 9 looks to take their first major tournament win this summer at ESL One Frankfurt or The International. 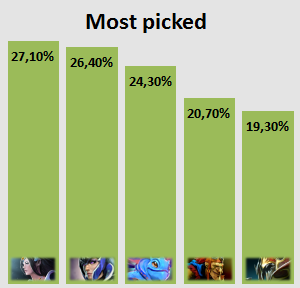 Cloud 9's recent drafts have been centered around mobility in team fights and initiation. They pick core heroes such as Mirana, Ember Spirit, Phantom Assassin, Riki, and Timbersaw. All of these have some type of movement oriented spell that allows them to engage and in some cases disengage very quickly. This style of play complements their blink supports very nicely, allowing the entire team to be in or out of a fight at a moments notice. This type of strategy combined with good coordination leads to very exciting team fights that are often fast and devastating to Cloud 9's opponents.

Cloud9's most drafted hero is Mirana, undoubtely one of SingSing's favorite heroes and a very versatile selection in terms of laning and role combinations. Much like SingSing and Mirana, EternalEnvy favors Luna for the main carry role. Her ability to have a strong presence in early-oriented line-ups while maintaining the late-game carry potential is an important virtue for Cloud9's strategies. The most-picked list is completed by Puck, Batrider and Nyx Assassin, three popular offlane-solo picks played mostly by bOne7. What they all have in common is the high solo-kill potential, and all of them are natural Blink Dagger carriers. 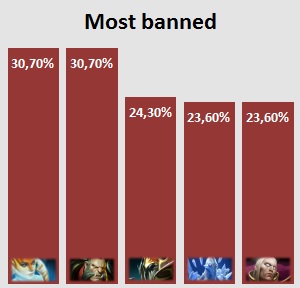 Cloud 9's bans focus on the strongest heroes of each patch, and since most of Cloud9's matches were played between the 6.79 and 6.81 period, the top-5 Most Banned list is mostly affected by those patches. Naga Siren and Lycan are the most feared opponents, as both heroes dominated the scene during early 2014. Naga Siren can be used both as a core and as a support, with massive split-pushing and a very strong ultimate as her weapons. On the other hand, Lycan is a hero that can terrorize some of the squishy heroes Cloud9 loves to pick, such as Luna, Chen and Ancient Apparition. Nyx Assassin is a natural counter to several usual selections of Cloud9, due to his formidable initiation and the unpredictable Spiked Carapace. To conclude,  Ancient Apparition and Invoker were two of the most popular selections in 6.80, as they both possess the ability to pick-off heroes with their global spells, while also providing a solid teamfight advantage to their controllers (with spells such as Chilling Touch and EMP).

EternalEnvy is occasionally referred to as EE-Sama or EE-kami by his fans, due to his love of Anime and Manga. "-sama" is used in Japanese when referring to someone of higher rank than yourself and "kami" is Japanese for god.

SingSing has one of the most popular Dota 2 streams with over 15 million views.

SingSing is also known as The Beaver Knight

Head over to the Gosuwiki for more information on Cloud 9