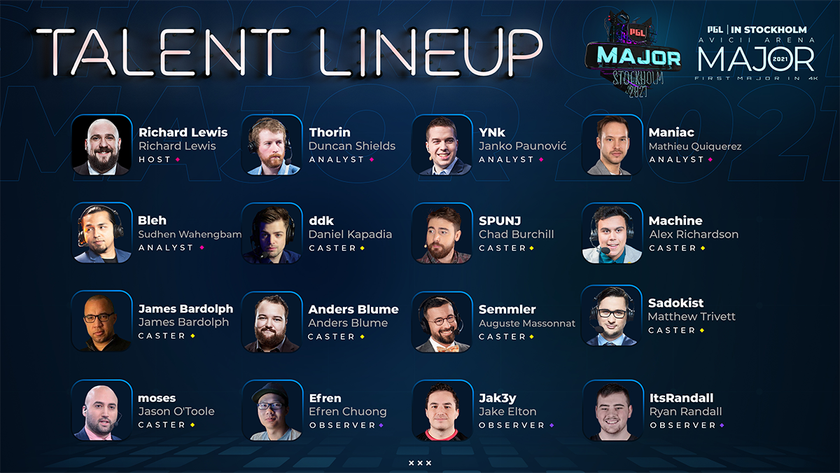 New and old names are also listed as part of the talent line-up for the CS:GO Major tournament in Stockholm.

Big names in the CS:GO commentary and analysis community have been announced as the talents for the upcoming PGL Stockholm Major 2021.  Names like Richard Lewis from Dexetro, who will host the tournament alongside Thorin and Sadokist, will be upfront and centre as the talking heads for CS: GO’s 2021 Major event.

They join the likes of ddk, SPUNJ, moses and YNk alongside several new faces. The announcement was made on PGL’s Twitter account.

The analyst desk will have Duncan ‘Thorin’ Shields, the ex MIBR and FaZe Clan coach Janko ‘YNk’ Paunovic, former player Mathieu ‘Maniac’ Quiquerez, and analyst Sudhen ‘Bleh’ Wahengbam as part of the team analysing the players during the tournament.

However, the biggest surprise seems to be the return of Matthew ‘Sadokist’ Trivett after not being involved in the CS:GO casting community for over a year and a half. His last event was in 2020 as well as a one-time stint at the StarLadder CIS RMR. Another old name is Daniel ‘ddk’ Kapadia, who casts for VALORANT these days.

The talent line-up will be headlining throughout the whole tournament, which is set to start from 26 October until 7 November. The tournament features a prize pool of $2,000,000.

What do you think of the talents that PGL has gathered?

Pretty good
Thank you for voting!
Meh
Thank you for voting!
Sharil “memeranglaut” Abdul Rahman
He dabbles in Esports, checking out what's new and hip with the industry. Outside of Esports and gaming, he likes Japan. Ijou. Check him out at @SharilGosu
Share Tweet
24 people reacted to this post