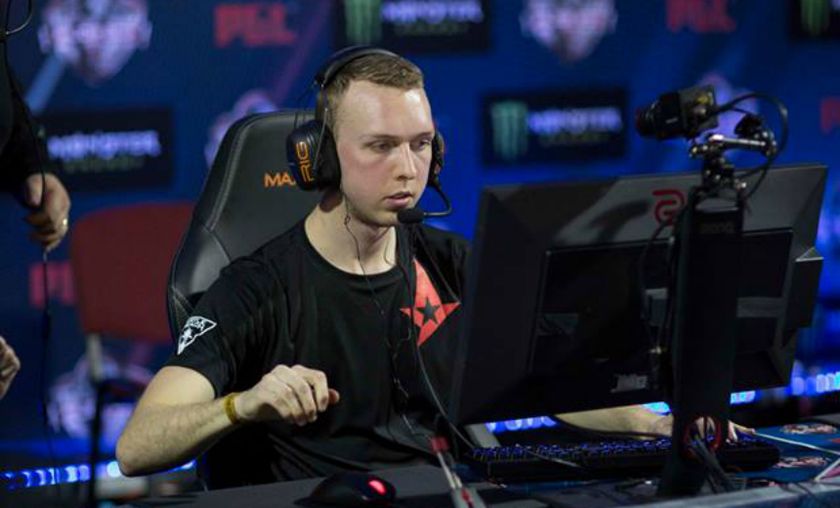 The highly anticipated match-up between the two top dogs of the Counter-Strike scene started with the Brazilians on the T side and the Danes on the CT side. SK attacked the B site and got the bomb down. But in the process, they lost four players, leaving only Marcelo "coldzera" David against three Astralis players. After getting the head of one clueless Astralis player, Marcelo "coldzera" David peeked the bomb, where it was being defused and meat-shielded by the remaining two Danish players. Marcelo "coldzera" David killed the two CT players, but was short on the defuser by just a second. The bomb was defused and Astralis took the pistol round, though Marcelo "coldzera" David ran away alive. Thanks to the bomb plant bonus, SK Gaming forced right back and were successful. The two teams traded rounds back and forth until SK Gaming won two rounds in a row, leaving Astralis' economy in shambles and stabilizing their own. At 3:5, we saw the first full-fledge gun round. The SK guys wrapped into the A site from Highway, A main and Squeaky. But to their demise, the timer was at 0:20, leaving SK in a difficult chokepoint, time-wise. The Astralis players then picked off SK one by one. We even saw a face-to-face no-scope by Nicolai "dev1ce" Reedtz onto a confused SK player. SK Gaming took the following round and brought their score to six. In the following round, Marcelo "coldzera" David tagged down Nicolai "dev1ce" Reedtz down to seven HP. But the Danish prince worked wonders with what was left of him, defending the B site with a triple kill. From then on, Astralis tied up the score and more, getting to eight rounds on the board. In the last round of the half, Astralis got the first frag but it was answered right back by Fernando "fer" Alvarenga with three kills. Thus, the half ended with 8:7 score for Astralis.

The second pistol round started with multiple trade frags between the two teams. After killing three, Peter "dupreeh" Rasmussen was left in a face-off against Fernando "fer" Alvarenga. Hiding behind Squeaky, Peter "dupreeh" Rasmussen tried to play the time but was hunted down by Fernando "fer" Alvarenga. However, the Brazilian didn't have the time to defuse and his clutch attempt was in vain. Once again, Astralis took the pistol round by a difference of a second. Astralis also locked down the anti-eco wins, getting to eleven. When SK were able to buy in the second half, Markus "Kjaerbye" Kjaerbye gifted two kills to his team, making the remaining three SK players back off immediately to save their rifles. The same pattern continued in the subsequent round. Astralis would explode onto a site and SK would have nothing to counter it with. After Astralis got to thirteen, they looked primed to get to fourteen. But Epitacio "TACO" de Melo clutched an insane 1v3. Trade frags favoured Astralis but the clutch plays favoured SK. The Brazilians proceeded to earn nine on the board but Astralis struck back. At 14:9, Astralis chose to attack the B site. Marcelo "coldzera" David, along with Joao "felps" Vasconcellos, were on the duty to defend the B bomb site. Though Joao "felps" Vasconcellos got the first kill, it was answered with two kills by the Astralis guys. Just when Astralis seemed to have locked down their fifteenth round, two Astralis players lined up in perfect alignment when Marcelo "coldzera" David fired an AWP shot. The Brazilian Terminator took down two and sparked a glimmer of hope for his team. The Danes' money was broken at this point and SK Gaming now had a legitimate chance to get back in the game, for they only had a four round deficit. However, after a chaotic round, the two in-game leaders were left in a duel. Though he had lower HP, Gabriel "FalleN" Toledo shot a bullet onto Lukas "gla1ve" Rossander. Afterwards, SK Gaming proceeded to get twelve on the board. But that was the end of the road for SK on de_Cache, as Astralis closed it out 16:12.

Map Two began well for the Brazilians, for they won the pistol round. Astralis bought upgraded pistols and forced back into the map, giving SK no room to breathe. Peter "dupreeh" Rasmussen wallbanged a SK player and Astralis proceeded to get a two-player lead. They went for the A site and got the bomb down. In the 2v2 post-plant, Astralis looked like they were going to run away with the game. But a flank through Monster crushed the Danes' dream and SK secured a second round on the board. Wasting absolutely no time, Gabriel "FalleN" Toledo brought out the big green gun, found the first pick and secured another round. In the first gun round, it was Nicolai "dev1ce" Reedtz to get the first frag with the AK-47. Astralis then took over the Bomb site and the remaining SK Gaming players bowed out to save their rifles. At 1:3, Gabriel "FalleN" Toledo took down Peter "dupreeh" Rasmussen, earning his team the early player advantage. When Astralis got to the B site, the round turned from 3v3 to a 1v3, with Nicolai "dev1ce" Reedtz left alone from the Danish camp. Nicolai "dev1ce" Reedtz found two fast frags and was only a headshot away from clutching it. However, his Brazilian counterpart was the superior one in this exchange. In the sixth round, Astralis committed to the A site with only 18 seconds left. All entry frags went the way of Astralis and SK's economy was broken. SK's upgraded pistol force failed, however, they managed to take down three players of Astralis. At 4:4, a duel between the two AWPers took place. Nicolai "dev1ce" Reedtz spotted a tiny portion of Gabriel "FalleN" Toledo's head and seized the opportunity to blow it off right then and there. Astralis came out victorious in so my duels they easily strolled their way to ten rounds in the first half.

SK were now on the T side and chose to go to the A site. But Markus "Kjaerbye" Kjaerbye and Andreas "Xyp9x" Hojsleth picked up two kills each on the defence, crushing SK's dream to come back into the map. SK Gaming partially forced but Astralis executed a perfect anti-eco. It was now 13:5 and SK Gaming have never looked so lost. Nicolai "dev1ce" Reedtz took the early pick, followed up by Markus "Kjaerbye" Kjaerbye, and this was the perfect example of how the second half played out. There was nothing SK could do as Astralis were all hitting their shots. SK were only able to pick up a single round before Astralis closed out the series with 16:6, showing absolute dominance and master class Counter-Strike.