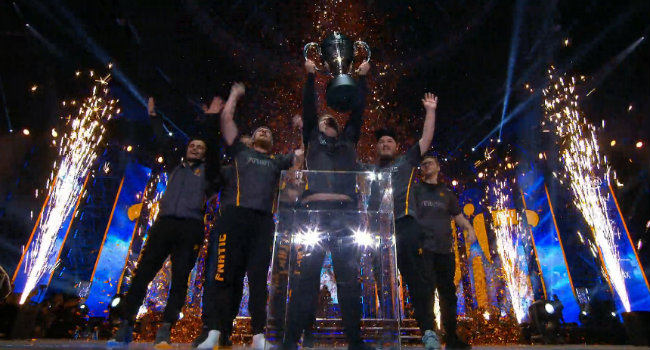 It had been a long barren spell for the once-great name of Fnatic, but IEM victory was the reward for a whole lot of patience.

Apparently there are three certainties in life. We all know about death and taxes, but we can add Fnatic winning Counter-Strike tournaments to the list.

It’s tough to measure long term success in a sport as young and ever-changing as ours, but you could reasonably argue that Fnatic is the most successful organisation to ever get involved in CS.

Prize earnings is a somewhat helpful metric, though the rapid growth of esports in recent years means rankings have a heavy bias towards players who have won tournaments in the last year. Still, if you look at the CS:GO rankings on esportsearnings.com, three current Fnatic players feature in the top 25 earners, with former-Fnatic star Olofmeister making it as high as the top five. Once the site is updated for last weekend’s IEM success, the other three will move up even higher.

If you look at the 1.6 rankings the picture becomes even clearer. Former Fnatic players make up the three earners of all time, with Robban just behind them in 6th place.

But all of that is history. After a couple of sparse years and a ton of rebuilding, Fnatic is back and they deserve all the plaudits they have been given. Here we have an organisation that knows esports is a marathon, not a sprint. Fnatic was once synonymous with Counter-Strike success, but the management was willing to experiment when things stopped being easy. It must have been a difficult couple of years but Sunday’s victory will have been all the more rewarding for the wait.

What Fnatic has done is more than just win a tournament. They have proven that esports rewards those who are willing to take risks and wait out periods of turmoil. The rest of the world caught up with the best team in the world after 2015, but the Fnatic organisation wasn’t done with winning.

They made changes when it was clear that the current situation wasn’t working and another IEM victory is their reward.

Remember the apparent fiasco with Godsent? At the time, it seemed ridiculous. It looked like a very lopsided trade, as Fnatic lost three of their Major-winning superstars for three unproven-but-promising youngsters. It seemed all the more absurd when 66% of the trade was undone less than six months later. Fnatic continued to struggle for most of 2017 but it could have been worse: Godsent never came close to regaining their 2016 form, and currently languish in 29th place on the HLTV rankings.

Fnatic then made further changes. Golden was promoted from the academy team and began to switch up the team’s strategic approach. This mixture of youthful exuberance and veteran know-how has revitalised the Swedish line-up. Golden’s in-game leadership reinvigorated a tired-looking team and turned them into a well-oiled machine. Fnatic showed all the traits of a champion team in the grand-final. The fact that they were dominated on the first map of Sunday's grand-final and still came back to win speaks volumes about the team’s resilience and will-to-win. More than anything, this latest incarnation of Fnatic is hungry. Krimz, JW and Flusha may have been there, done that and bought the cheaply-made, poor quality t-shirt, but this is the first taste of success for Golden and Lekr0

It was clear that the latter pair’s yearning for success lit a fire under the veterans, especially Flusha. His MVP award was certainly warranted during the final itself. In a server filled with stars, he shone the brightest. Guardian’s 1v5 ace may have been the big highlight reel moment of the match, but Flusha was consistently brilliant. He had a 1.32 rating over the course of the tournament and 1.30 in the final, when it really counted. He had the highest average damage across five maps, the most entry frags and the most total kills. Truly a special performance from a special player.

I could go on singing the praises of Fnatic (and Flusha) but it would get boring eventually. Still, this achievement cannot be overstated. For a team that has dropped in and out of the world top ten in recent years, to win a big tournament like IEM is a huge turnaround. To win it against the current number one is even more impressive. Fnatic’s success is a sign of what can be accomplished with time, patience, and good management.

Can Fnatic go on to win more after this?