Zenith took a game off Invictus Gaming but it was the TI2 champion who prevailed ultimately. iG will be joining NeoES.Orange in G-1 League offline event later this year. Mini playoffs will begin on the 9th of April.

iG has defeated Zenith in what seems to be a back and forth battle of the minds including a no-ban strat by Zenith in game two. With the win in hand, iG will be joining NeoES.Orange, Malaysian team in the offline final of G-1 League later this year.

Zenith on the other hand will be facing LGD.cn on the 9th of April in a mini relegation playoffs. The winner of that best-of-three match will also qualify for the offline final. 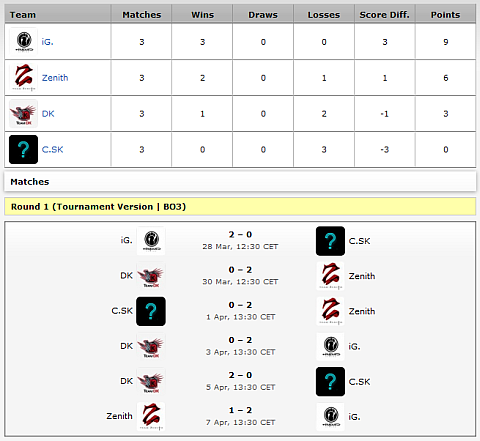 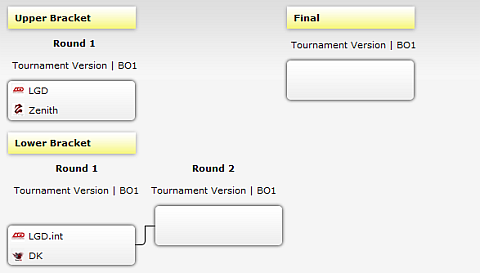 Iceiceice was really aggressive against Zhou, giving him a hard time in the beginning with a Haste rune. His overconfidence was his doom though, when he tower dove to finish off Zhou and met Chuan's immediate response.

For the first 20 minutes of the game, both teams had managed to gank a few heroes, with iG leading the score. The problem for Zenith was the inability to take down the enemy's key heroes, only managing to kill Faith and Chuan. Eventually they managed to pick-off Zhou, who had his Shadow Blade impressively early.

During the mid-game, iG used their aggressive playstyle to strip Zenith of their map control, doing so in success. Zhou chose to pick up Mask of Madness, demolishing towers extremely fast, killing the last tier-two by minute 30, with Zenith deciding not to contest another outside tower.

Trapped inside their base, the Singaporean team was behind in terms of gold and experience, and Tinker was the only one who could get some farm outside the walls. On the other hand, iG's heroes were super-farmed, with Zhou and YYF finishing their luxury items.

40 minutes had passed when iG decided to execute Zenith. They picked off Meracle's Tiny, and entered the base without much contest, taking down middle barracks. A minute later, a well-placed Reverse Polarity sealed the deal, with iG winning a 4-1 fight, forcing Zenith to call the game. 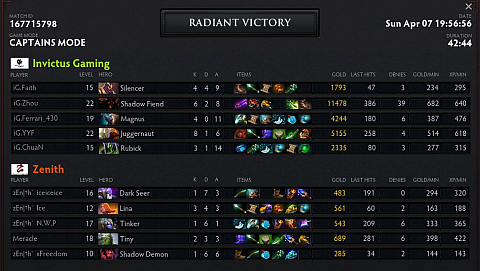 One could witness a completely different Zenith in Game 2. They skipped their ban phase and just picked a line-up they are comfortable with. IG, on the other hand, picked famous top-tier heroes, abusing Zenith's unwillingness to ban.

Zenith got the lead early, with 430 dying to iceiceice and Freedom. Meracle also managed to take down Zhou, destroying the first tier-one shortly after.

The Singaporeans looked really strong through the entirety of the early game. Their lead was 8-4 when they finished the tier-one towers by minute 15. IG tried to react, but lost two heroes and their top tier-two in return.

The pressure from the Radiant was immense. Lone Druid couldn't farm properly against Naix, while Magnus kept succumbing to ganks, that delayed his Blink Dagger significantly. He eventually managed to get it 22 minutes into the game.

As soon as YYF got his dagger, the Chinese aimed to team-fight to get back into the game. As a result, they forced a clash next to the Radiant's bottom tier-one, which ended up 4-3 in favor of Zenith.

A minute of carelessness for iG was all Zenith needed to prove they should not be underestimated. They picked-off Zhou, YYF and Faith, and entered the Rosh pit shortly after. It was time for them to push and destroy iG once and for all.

31 minutes on the clock, Zenith fought iG once again, completely destroying them in result, for a 4-0 fight. Tinker bought back and managed to drive them off, briefly. Another fight three minutes later clarified that Zenith's advantage was too big. A three-man Reverse Polarity by YYF did not help iG, and Faith called the gg as their barracks were "melting". 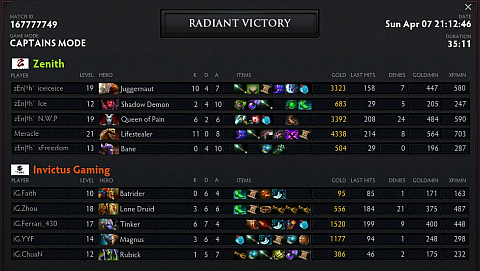 Zenith attempted to surprise iG with two uncommon picks, Naga Siren and Shadow Priest, forging a line-up with nice team-fight possibilities. On the other hand, iG did not want to mess around, picking a really solid offensive trilane with
with nice crowd control.

The outcome of the match was decided pretty early. The International 2 Champions dominated every lane, grabbing kill after kill without facing resistance. They even managed to get a kill per minute for about 20 minutes.

Such was the advantage of iG that the players decided to mess around, getting Dagons on all five heroes, to humiliate Zenith. They entered Zenith's base 24 minutes into the game, to bring down the middle barracks.

Zenith did not give up. When iG attempted to take down the bottom racks, Naga Siren managed to catch everyone with Song of the Siren, and Undying-Dazzle-Tinker combo took down two Radiant heroes surprisingly fast. The same thing happened two minutes later, resulting in a 4-2 fight for Zenith.

Not taking any risks, iG decided to get serious again, killing Roshan before attempting to penetrate Zenith's defenses again. The choice was wise : the next fight was a bloody massacre for Zenith, ending 5-0. The score was 29-9 when Zenith decided to concede. 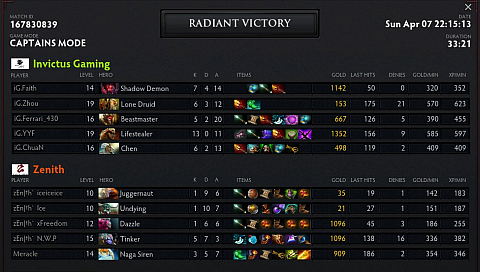 The two second placers, LGD.cn and Zenith will be playing each other on the 9th of April to determine who will be the third one qualifying for the offline event. All the games of the relegation playoffs will be played in best-of-three.


G-1 League Coverage Hub
Check link for brackets, and tournament format
Andreas “drouks” St
There's really not much to say about Andreas 'drouks' Stavridakis, except that he sleeps two hours a day, plays the guitar and survives solely on Diet Coke. He also writes about DotA sometimes.
Share Tweet
1 people reacted to this post