Two Malaysian teams will be facing off in the Winner Bracket final tomorrow in GEST The Challenge after LGD.Int suffered a 0-2 defeat to NeoES.Orange just moments ago. Both games lasted for a long time but Mushi's Shadow Fiend had the advantage over Pajkatt's Anti-Mage with the support from his teammates. 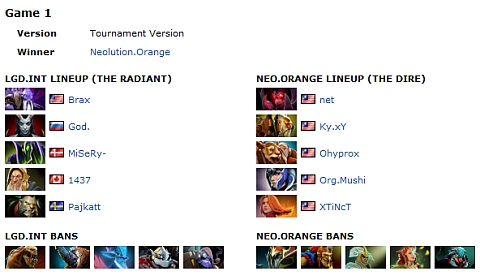 LGD.Int opted for a very aggressive pushing strategy with their trademark Lycanthrope pick along with Keeper of the Light and Rubick to support in the safe-lane while Orange settled for a counter-push/split push strat with Shadow Demon, Brewmaster and Luna.

LGD.Int abandoned their top lane for Orange's Brewmaster to free farm while Lone Druid was useless in stopping Lycanthrope free farming in the bot lane with constant harrass from the Keeper of the Light and Rubick. LGD.Int's Dark Seer did eventually go back to the top lane to disrupt the creep equilibrium.

Orange came up on top in an engagement near Dire's bottom tier one tower with teleport support from Brewmaster and a hasted Luna. Lycanthrope, and Rubick died after overextending into the tower for an attempt at the Lone Druid.

Brewmaster quick Blink Dagger was going to work for Orange as he successfully picked off two sloppy supports by himself on the top lane. Lycanthrope started rotating around the map and pushed down multiple towers to gain the gold advantage for the supports. LGD.Int is up by 5,000 gold at 10 minutes.

Big, messy fight broke out at the top with five of Orange heroes going up against four of LGD.Int heroes. The battle went in favour of Orange with Brewmaster once again spearheading the charge. However, LGD.Int still brought down Orange's tier one tower. Despite of the 7,500 gold advantage on LGD.Int, they were losing battles after battles. LGD.Int continued to take down towers but at the expense of their heroes lives.

The game fell into a stand-off as both teams were undecided on what to do. Orange however, turned out to be the more disciplined team among the two and successfully picked off a couple of heroes. At one point of the game, Orange was on a 9-0 run in hero kills.

Dark Seer's mistake at the end sealed the game for LGD.Int. Orange took game one in a very well-rounded and disciplined fashion. 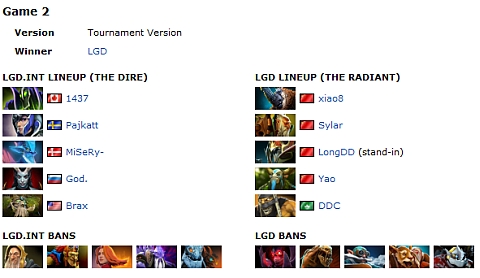 The start of game two was immediately a great success for LGD.Int especially for the off-lane Batrider which managed to harrass Keeper of the Light so much he chewed through all his Tangos. Shadow Demon also placed a great Sentry Ward to deward the rune spot the second it was placed down.

LGD.Int's left Anti-Mage at the top lane to go solo against Clockwerk and moved into the Radiant jungle to provide extra support for the Batrider. LGD.Int creatively smoked up from the Radiant jungle and moved all the way to the top lane to kill Clockwerk but he managed to escape and ran for a long time before he was killed by Chen. Anti-Mage wasted a lot of time chasing down the Clockwerk.

LGD.Int popped another smoke at 9 minutes and picked off the Keeper of the Light who was in the midst of stacking the neutral camp. Shadow Fiend died as well to the Flaming Lasso.

Despite dying once, Shadow Fiend was up to 122 creep kills by 16 minutes plus two tower kills. Shadow Fiend got his third tower kill at 19 minutes as Beastmaster got hooked and was destroyed in seconds. Orange as a whole was up to 6,000 gold lead by 20 minutes.

LGD.Int attempted their trademark grouping up but was a little too late as Orange destroyed their tower before LGD.Int could even reach Orange's. Tidehunter initiated the fight with his newly acquired Blink Dagger but his Ravage only caught one with some quick reaction from LGD.Int. Only the Chen went down that fight. Orange took down another tower as LGD.Int was going for the unfinished tower at the bottom lane.

29 minutes in, Anti-Mage was all of the sudden rallying his team back into the game. He seized the opportunity of a fight near the Roshan pit and took down Orange's base tower as well as killing off Keeper of the Light. He proceeded to destroy the tier one tower at top. He had Battlefury, Manta Style as well as 4,750 gold saved up.

Anti-Mage rallying his team back into the game

Orange tried to gank Anti-Mage several times but to no avail. Instead, Anti-Mage managed to snipe off Orange's courier as it was sending Manta Style to the Shadow Fiend delaying Orange's final push even further. Three of LGD.Int heroes had Black King Bar by then.

The game went into another stand-off although the Anti-Mage is slowly regaining the map control for his team. He went past Shadow Fiend's creep kills for the first time at 41 minutes. Anti-Mage had 467 creep kills.

Orange took advantage of some sloppy positioning by LGD.Int and took down Anti-Mage before he could be sent back to base by Chen. He bought back into the game but was killed again after Beastmaster used his Roar on Keeper of the Light rather than the Shadow Fiend. The Shadow Fiend just plowed through everyone and Orange took down raxes from two lanes.

Despite having both raxes down, LGD.Int did not give up and defended their base for another 15 minutes before Orange went for the risky final push.

GEST The Challenge will resume at 12:00 CET / 19:00 SGT tomorrow with Vici Gaming first going up against LGD.Int. The loser of the game will be eliminated from the tournament.

All the games tomorrow will also be played in best-of-three.

BeyondTheSummit will be broadcasting from the main channel tomorrow at the appointed time.