Invictus Gaming with its five players Zhou, Ferrari, YYF, ChuaN and Faith has gained the most prize money of all Dota 2 in year 2012. The International with its million Dollar prize of course gave the that title to the Chinese team. They lead the table of summed up and to USD converted prize money from Dota 2 tournaments in 2012. Apart from The International, iG also had success in G-1 League and the World Cyber Games, summing up to $1,026,400 of total prize money.

iG is followed by the TI2 runner-ups Na'Vi and LGD, with $323,840 and $197,300 total prize money in the last year. Best team in this ranking without any winnings from Seattle is mTw, shortly followed by Empire and fnatic. The ranking is conducted by 174 final placements in tournament and leagues by teams in 2012 which were awarded with prize money. Not the composition of a roster was decisive, but the tag the team played under. Single showmatches were not included.

Without The International tournament, the field is much more heterogeneous, and got more weight on the western scene. Team EG, mousesports and NoTidehunter all almost scratched the value of $20,000 prize money outside of Seattle. Best Asian team outside of TI2 was LGD.cn with huge success at G-1 League and The Asia in the last quarter of 2012. 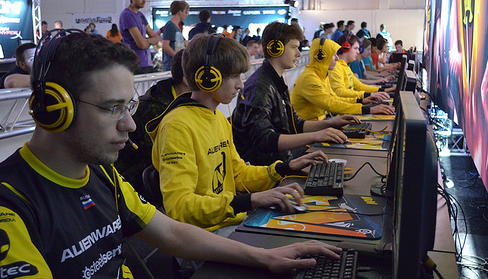 When divided by months, the strong growth of Dota 2 throughout the year is clearly visible. Tournaments are considered only by their ending date, as that is the date when the winners are determined. While the first quarter of the year barely breached the $30,000, this was distributed within a week on average in both November and December.

If the level of the fourth quarter can be hold for the whole year 2013, third-party prize money would be doubled again compared to 2012 and breach the million Dollar barrier. Overall the November with G-1 League in China and DreamHack Winter in Europe set the record for non-TI prize money in 2012.

2013 could also bring even more growth as tournaments like GEST and SMM still can make the switch over from DotA to Dota 2 with their regular tournaments.

If these numbers from Dota 2 in 2012 are compared to other eSport games, the Top 200 players of Starcraft 2 have earned prize money worth $3,350,000 in 2012 according to SC2earnings.com, League of Legends also had a massive $2,000,000 Riot-sponsored Season 2 final in Los Angeles this year, but you would need the all-time winnings of the three most successful quartets in CS 1.6 combined to surpass the winnings of iG in this year according to Thorin's take.