Garimto: 'StarCraft 2 could unify the whole gaming world around one e-sport.' 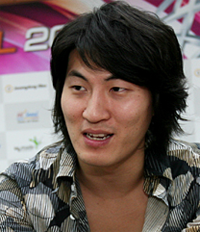 The two times Starleague gold medalist Garimto, now retired from the Brood War scene, shares with Artosis his impressions from StarCraft 2. The former Korean pro-gamer is currently one of the best players on the Asian beta servers and gladly talks about some balance issues and the game in general.

- “I think the weakest race as of now might be Terran. However, it is really fun to play Terran versus Protoss because you have to invent something since this match-up is actually hard to win. It feels good when you win with Terran against Protoss – it’s really fun and brings good emotions.”

When talking about the future of competitive StarCraft 2, Garimto makes a comparison with its predecessor and expresses strong hopes about its faith.

- “StarCraft 2 popularization is going to be different. As you all know, StarCraft and Brood War became popular by themselves. If StarCraft 2 becomes that much popular it will be in another way. While currently in Brood War proleagues there is just Korea by itself, StarCraft 2 could unify the whole gaming world around one e-sport.”

Garimto also answers a few questions about his gaming carееr and when asked if he plans to return to the life of a pro-gamer he is positive it won’t happen.

- “I have had a bit of a hard taste on comebacks before, I am bad at it. I won’t be at the top level of SC2 but if someone asks me “Do you want to compete in tournaments around the world?” then I will do it.”

- “I know how good I am” further explains the former gosu. “When I was young, I had a lot of energy and I used to say “I can do this, I can win”. I now know what level I am at. Sometimes it’s better not to know all that stuff before you can get energetic again and start playing hard. The life of a pro-gamer is very hard and I don’t want to go back to it.”

In his final words, Garimto is again very optimistic about the future of StarCraft 2 and its development as an e-sport. “The old players have no advantages to the new ones, everyone is at the same level. So whoever is more daring, striving and hardworking will most probably win.”