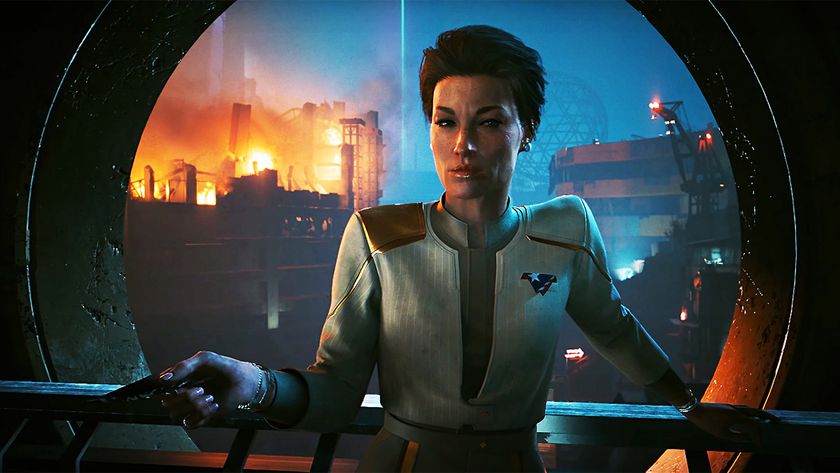 Cyberpunk 2077’s first expansion will launch next year, introducing a new cast of characters in a ‘spy-thriller’ story campaign.

CD Projekt Red’s recent Night City Wire stream has revealed the upcoming first expansion for Cyberpunk 2077: Phantom Liberty. The expansion will launch in 2023, featuring the return of Keanu Reeves as Johnny Silverhand in a story that has heavy spy-thriller undertones. If you’re a Metal Gear Solid fan, you’ll probably be pleased.

Watch the first teaser below:

Phantom Liberty will bring players to an all-new district in Night City, where V mysteriously swears an oath to, “faithfully serve the New United States of America.” That’s an oath that her partner-in-crime Johnny Silverhand thinks is a very bad idea. The teaser doesn’t give us much to go on in story details, but it looks like V is going to become entangled with the upper government of the futuristic U.S., whose powerful hands reach far beyond Night City alone.

Keanu Reeves himself showed up during the stream to voice his excitement in returning as Johnny Silverhand, the ghostly rockstar who once again accompanies V during this adventure. If we’re going to guess at the timeline of the expansion, we’d say that Phantom Liberty is set some time before the base game’s multiple endings, which don’t leave much room for a proper continuation otherwise.

The teaser itself looks undeniably cool, filled with even more dystopian imagery than what we’ve become accustomed to seeing in Night City. The streets of this new district are burning and even its most impressive jewel-like structures are shrouded in darkness, as law enforcers touch down to take back control of its populace. A new character smoking a cigarette is dressed in clean government uniform, seemingly having just forced V to take an oath on behalf of the new U.S. We also see some action play out as V lashes out with an electrical whip at enemies indoors, before firing off shots in a greenhouse.

The teaser’s gameplay looks beautiful, if a little stuttery at times. Still, let’s remember that Cyberpunk 2077 has always been great at marketing even if the final quality of its product ended up being dubious. The Phantom Liberty expansion will launch on PlayStation 5, Xbox Series X|S, Google Stadia and PC in 2023, seemingly as a next-gen only product, so PlayStation 4 and Xbox One players are out of luck. Cyberpunk 2077’s 1.6 patch (which is now live) will be the game’s final update on these older consoles.

Speaking of, the 1.6 patch, titled Edgerunners after Netflix’s upcoming Cyberpunk anime series of the same name, is also bringing some new content to the game. The Edgerunners update will let players wear the yellow jacket worn by the anime’s protagonist David Martinez, along with a weapon from the series. There will also be a new quest featuring references to the show, and other quality-of-life changes like proper clothing transmog, facial customisation at Ripper Docs, and an overhauled police system. There is also a playable Roach Race arcade cabinet minigame, based on Geralt’s horse from The Witcher (though CD Projekt Red denies any similarities between the two with a wink).

We also got a new English Dub trailer for Cyberpunk: Edgerunners, whose cast features the likes of Breaking Bad and Better Call Saul’s Giancarlo Esposito. Beware, it’s not safe for work - but it is very fun:

Are you looking forward to Phantom Liberty?