With their emphatic victory over the 3 time-Grand Finalist Na'Vi, Cloud 9 will continue their fight for glory in the Lower Bracket Round 2 against the #1 seed of the Round Robin Stage, the Chinese dominators, Vici Gaming. With so much to lose and so much to gain, no one wants to go home a loser this late in the tournament.

Draft - ViCi Gaming's lineup consists of the pushing strategy with Doom, Natures Prophet, Dazzle and Bristleback with some team fight/control with Sand King. Cloud9 wants huge magic burst and pick-off potential with pretty much all of their heroes. EternalEnvy's invoker will provide some split-push potential with the Forge spirits while still adding a Sunstrike to Cloud9's ganks. We're in for an interesting game!

Top - Batrider vs a trilane (Nature's Prophet, Dazzle and Sandking)

3:39 - Almost another kill for Batrider on Dazzle with the help of Sunstrike but Sand King comes to the rescue.

7:45 - VG abandons all lanes and goes for a 5-man push on Radiant's Tier 1 Tower while protecting their top tower.

9:43 - VG takes their second tower of the game, leaving the last hit of Radiant's top tower to Doom.

10:30 - Batrider and Shadow Shaman smoke and kill Dazzle but Sand King gets a return kill on Shadow Shaman with his new blink dagger.

10:51 - Natures Prophet gets a deny on the Bottom tower with just 4 treants.

12:19 - Batrider, Skywrath and Ember use all of their ults to kill Bristleback.

13:00 - Sandking uses his Epicenter on an illusion!

13:55 - Cloud9 attempts a push and takes the mid tower with Shadow Shaman's ult but VG kills Skywrath in the process.

15:09 - VG kills Ember Spirit using Doom and transitions the kill into a push.

19:45 - VG tries to take the Tier 2 Top tower but Batride picks off Natures Prophet with his ult. HUGE FIGHT ensues with 2 casualties (Skywrath Mage and Shadow Shaman), a buy-back from Natures Prophet and the top tower going down.

23:25 - VG takes Roshan, giving the Aegis to the tanky Bristleback.

26:00 - VG pushes for the bottom Tier 3 but Cloud9 defends it successfully with both Skywrath and Dazzle dead.

33:44 - C9 uses a smoke to go for Roshan using Serpent Wards to kill it quickly, aegis going to Ember. But VG quickly runs to the tower, killing Invoker, Skywrath and Shadow Shaman. SandKing goes down as well.

40:05 - GG! Fy's Sand King kills Batrider. C9 taps out with their Bottom Rax gone and with VG transitioning to the Mid-Rax. 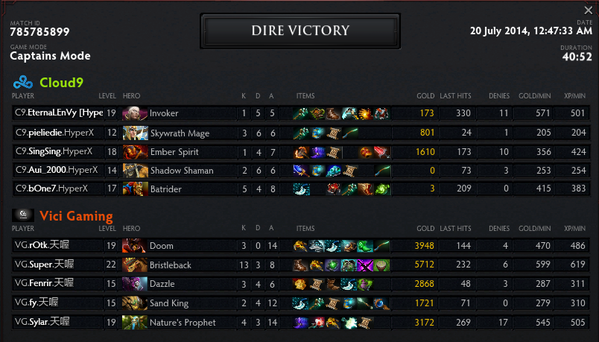