Invictus Gaming is one of the most successful teams today dominating in both Warcraft3 DotA and in Dota 2.

Shifting from Warcraft3 DotA to Dota2 and vice versa everytime they join a tournament is tough, imagine their preparation and dedication to the game itself. With iG probably being on the highest peak of their career so far it seems like there is no stopping them on claiming every title they could think of. Despite being a team in just under a year they've already done and proved so much.

Let's take a look at what they've achieved so far.

With iG joining the list of teams to compete in the prestigious Sendi Mutiara Multimedia last December of 2011, they were not originally considered as the prime pick to win the championship title because of roster instability. But nonetheless they proved that they are the team to beat, they went all the way to the finals and battled it out against another Chinese powerhouse Nirvana.cn with a one-game advantage as they entered through the winners bracket. iG would not put their advantage to waste as they beat Nirvana.cn to walk away with $18,000 in cash and the glory of being the world's best team in DotA.

After an intense Season, iG challenged the back-to-back Champion DK who planned on going for their Third Consecutive G-League Title. They battled it out in a best-of-five finals and we can surely say that the finals were indeed entertaining as they fought in a decisive game 5. iG won the first game then DK replied with a 2 consecutive win after that but iG was just too much for them and they took home the G League DotA crown. Final score was 3-2 in favor of iG, they won $31,500 in cash.

Invictus Gaming started group stages of The International 2012 off with an almost flawless record of 13-1. They faced EG in the upper bracket and it wasn't easy but they managed to beat them 2-1. After that, they faced the defending champs Na'Vi in the second round where they would concede their first loss in the tournament, dropping down to the lower bracket and facing an even harder way up to the grand finals. They fought teams in the lower bracket namely EHOME, DK and LGD who went 18-0 until Na'Vi put an end to them and sent them to the lower bracket as well. iG won the match against LGD with a 2-1 in their favor, then they met Na'Vi once again in the finals where in they would seek on redeeming themselves and that's just what they did, Na'Vi only managed to get a win before iG finished them off with a 3-1 record. They were crowned as the champions of TI2 and took home a whopping $1,000,000 plus a one of a kind trophy in the form of an Aegis of the Immortals. 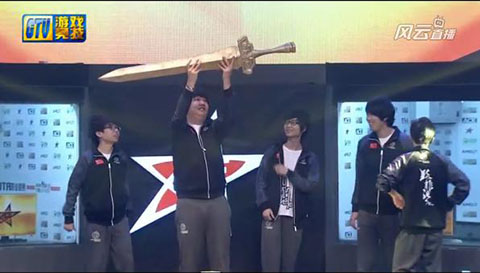 Invictus gaming defeated Dt^Club in the semi-finals 2-0 and dominated LGD in their best of three finals match capping a 2-0 score, not taking any chance of risking a decisive game 3. It seems like iG is on an unstoppable streak after their win in Seattle, defying all odds to become victorious in the Association of China Esports Professional DotA League, winning $31,670 plus a sword to match their shield which they got from TI2.


A quick chat with iG
How did the team become so successful in both WarCraft3 DotA and Dota2?
This is the result of everyone’s hard work.

How do you guys practice and how much time do you put in it?
We normally schedule scrims with professional teams, from the afternoon to late night. About 7 to 8 hours per day.

With this year's SMM drawing near, what preparations will you be doing?
We all practice Dota 2 now, for SMM we just have to react based on instincts.

What are we going to expect from you guys? Can you defend your title?
Of course.

Thank you. Does the team want to thank anyone?
Thanks to our club for all the support, and thanks to all our fans for supporting us.

A few words from the captain, Chen 'Zhou' Yao

Being the captain of the team, how much responsibility do you shoulder?
I think I should stand up to take responsibility for the team. If the team needs something, I will work on it. And help with mediating between the members to keep a fun atmosphere.

How do you feel about the team being successful in both WarCraft3 DotA and Dota2?
This results from everyone’s hard work.

Despite being one of the most formidable players today, what do you still want to improve with your skills?
I want to improve in lots of ways, for example last hitting, striving for excellence.

Thank you for the time, anyone you want to thank?
Thanks to the club and our fans for supporting me. Our performance will not let you down, thank you.


Want to know more about Invictus Gaming? Well don't forget to like their Official Facebook Page and check out daily updates about the players and the team itself.