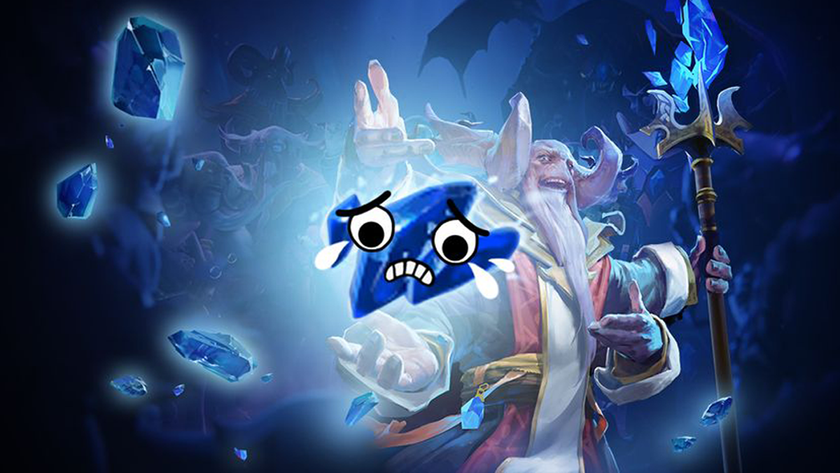 The least popular Aghanim's Shards from the DPC Summer Tour

At the end of the 2021-2022 DPC Summer Tour, we take a look at the least popular Aghanim’s Shards across all Dota 2 regions.

Across the six Dota 2 regions (Southeast Asia, China, North America, South America, Western Europe, Eastern Europe), a total of 824 games were played in the 2021-2022 DPC Summer Tour. From those games, the data for the lowest percentage of Aghanim’s Shards pickups for heroes who were picked at least 20 games has been shown below. All the data was obtained from datDota. 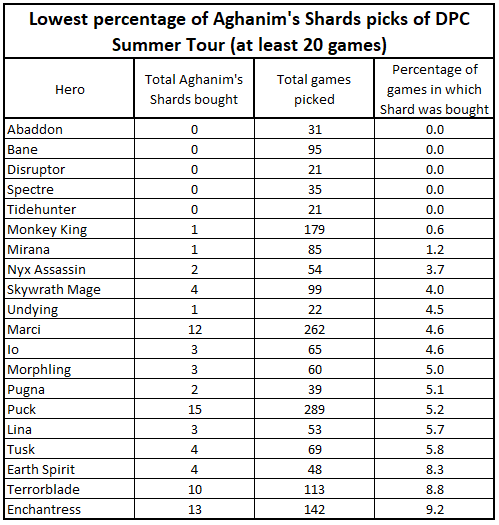 The name that stands out the most in the list is Marci. The latest addition to Captain’s Mode, Marci has been a huge hit as a support in her very first DPC Season. But one thing that hasn’t caught on is her Aghanim’s Shard. A reason for that, is not too many players are sure what it does!

Marci’s Aghanim’s Shard upgrade: Rebound can be set to autocast to throw the targeted unit instead of rebounding off it.

The Shard is so bad, that in one of Tundra Esports’ EU DPC games, Martin “Saksa” Sazdov actually had the Shard from Roshan, and instead of using it, chose to destroy it! The rest of his team had already consumed a Shard, so no one else had any use for it. But this goes to show that Marci’s Shard needs a rework.

The next in line is Monkey King, who had an extremely popular Shard till a few months ago, but after a nerf to it, has lost all value. Bane and Mirana are the two usual suspects in the list of least popular Aghanim’s Shards – two heroes that have been popular in the professional scene for quite a few seasons, but whose Aghanim’s Shard upgrades are abysmal. Mirana had her Shard recently reworked, but as it turns out, it went from bad to one of the absolute worst in the game. Similar is the case with Abaddon, who had a reasonably decent Shard, but it was reworked to turn it into one worth forgetting.

Two noteworthy cores in there are Puck and Terroroblade. Puck’s Shard upgrade, which causes it to attack all enemies when it Phase Shifts, was actually a popular pick when it was a level 10 talent. But the way Puck is currently played as a tempo controller, the Shard isn’t of much use for the hero.

Terrorblade is a bit more baffling, as he is one of the fastest farmers in the game, and his Shard is quite decent. It gives Terrorblade a new ability, Demon Zeal.

The skill costs 20% of the current health as cost, which might be the deterring factor.

Balancing Aghanim’s Shards is a tricky job, as it is a very unique item that does not consume a slot, does not provide stats, but upgrades an ability or adds a new one. For the next big patch that comes our way, which should be Dota 2 patch 7.32, the Aghanim’s Shards that need buffing are the ones in the list above. It isn’t the easiest of things to do though, as all heroes that have made the list are good enough to be picked in at least 20 games of the DPC Summer Tour. So buffing their Aghanim’s Shard will mean nerfing other aspects of the heroes to maintain balance in all things.

Do all these Aghanim's Shards need a buff?