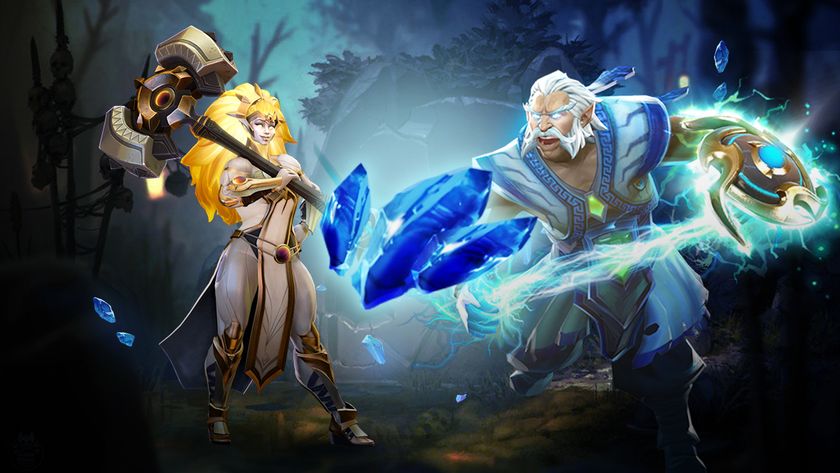 At the end of the DPC 2021-22 Summer Tour, we take a look at the most popular Aghanim’s Shards across all six competing Dota 2 regions.

Aghanim’s Shard is one of the most unique items to have embraced the game of Dota 2. The item doesn’t take up space but does cost 1400 gold without providing stats. The benefits are, of course, very relative depending on the hero, the upgrade the Shard offers for the hero and the role the hero is being played in, which makes it one of the trickiest items to balance. That is what makes it interesting to track which Aghanim’s Shards are the most popular ones in a DPC season and which ones have been ignored and deserve a buff.

Going from the DPC Winter Tour to the DPC Summer tour, the patch changed from 7.31c to 7.31d. The meta didn’t see a huge change in terms of how the game is played and the timings around objectives, but the preferred heroes did see a change.

The DPC 2021-22 Summer Tour recently ended, with a total of 824 games played in the two divisions of five of the six Dota 2 regions (North America, South America, Western Europe, Southeast Asia and China 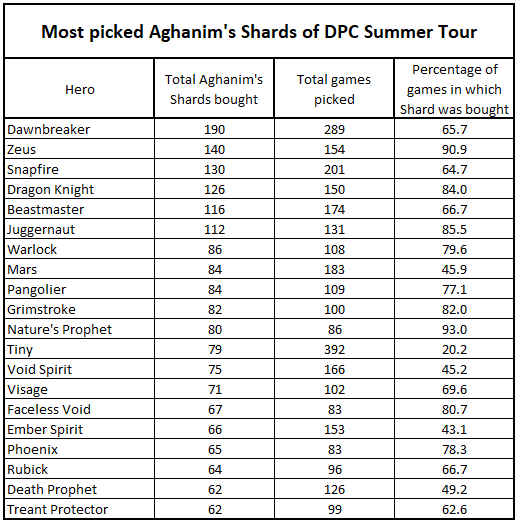 In the 824 games played for the DPC Spring Tour, Dawnbreaker tops the charts for most purchased Aghanim’s Shards with 190. Following the Stone Giant closely is Zeus with 140 Shard pickups, with Snapfire, Dragon Knight and Beastmaster rounding up the top five. 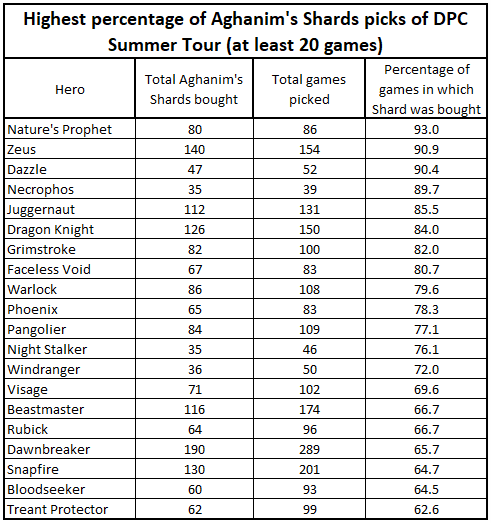 While the most picked by absolute number is a good way to look at the popularity of an Aghanim’s Shard, looking at the purchase of Aghanim’s Shards from a percentage perspective gives an idea of which ones are highly prioritized; and that paints a slightly different picture.

The honor of highest percentage of Shard pickup falls to Nature’s Prophet, who was not only picked for a lot of games, but also saw a Shard pickup in 93% of those games (86 games picked, 80 games in which Aghanim’s Shard was bought)!

But other heroes like Dazzle, Necrophos, Night Stalker and Windranger who don’t really show up in the most picked table due to their lack of total games, come into the picture here. These are either heroes that are banned too often or fringe meta heroes who aren’t picked too often, but when picked, their Aghanim’s Shard is a go to item in their build.

A sure fire way to land the Starbreaker stun or dance yourself out of a murky situation. This Aghanim’s Shard is a nobrainer, as it comes into play every 11 seconds. The Shard gains twice the benefit at level 25, when Dawnbreaker gets two charges of Starbreaker. 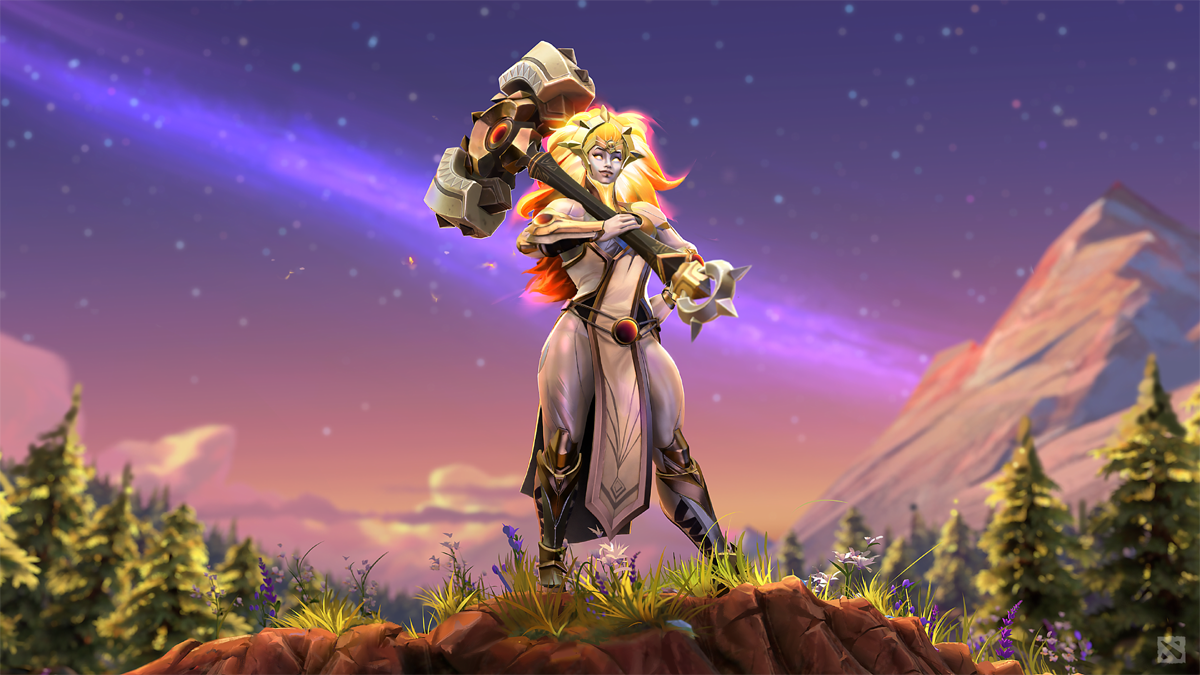 Zeus shocks any enemy that he attacks or is hit by his abilities, causing damage equal to 9% of their current health.

Zeus gets level 3 of the old Static Field ability with the Shard at the 15 minute mark, and with four active abilities, can do significantly more damage with Static Field than before! A 2000 HP hero, when hit by all four of Zeus spells will come down to an HP of 1115, considering the standard 25% magic resistance every hero has. But with Static Field, the hero will be reduced to an HP of 572! The skill has massive potential, which makes Zeus’ Aghanim’s Shard one of the most purchased Shards on an absolute as well as percentage basis.

Nature’s Prophet’s Aghanim’s Shard has been one of the most popular Shards since their inception in Dota 2 patch 7.28. The Greater Treants are insanely powerful for pushing out creep waves or damaging buildings and don’t even need the use of Nature’s Call! Whenever Nature’s Prophet is popular in the meta, this Shard will always pop up as one of the most popular ones, which can be seen in the data here, with NP’s Shard having the highest pick rate of a staggering 93%!

Ignites an area, dealing damage over time that lingers on enemies in it. Has reduced cast range when melee.

For the DPC Winter Tour (DPC Season 1), Dragon Knight’s Shard was one of the least popular ones. But an AoE increase from 65 to 80 and the ability to buy it at 15 minutes increased its popularity, making it one of the most popular Shards in the DPC Spring Tour (DPC Season 2). Dragon Knight can now afford to go for early team fight items like Blink Dagger, and still have the ability to farm fast with Breathe Fire and Fireball. Fireball is 80 DPS for 8 seconds, so it helps in clearing stacks quite quickly. It is also a great follow up for the Blink into Dragon Tail initiation, and also helps with pushing out lanes.

Juggernaut is one of the hottest carries this meta. Dota 2 patch 7.31d saw Healing Salve and BKB nerfed. Because of that, Juggernaut’s ability to heal in lane with Healing Ward and become magic immune with Blade Fury is priceless this meta. With the Aghanim’s Shard, Blade Fury effectively becomes a 5 seconds BKB which also does magic damage! The duration can be increased to 6 seconds with the level 15 talent. It is hands down, one of the best Aghanim’s Shards in the game, and the numbers back that up.

Do you pick heroes in pubs based on the strength of their Aghanim's Shards?