In a patch that has lasted for a long time, Hoodwink started making waves only towards the tail end and is now one of the strongest heroes in the meta.

All data has been taken from datDota.

When a patch goes on for a long time like Dota 2 patch 7.29 (nearly three and a half months now!), a portion of the meta does remain stale, but there is also another part which sees rejuvenation. Certain heroes or items that don’t see popularity at first tend to see more play later on in the meta as teams try to find a surprise factor or to get one over their opponents.

The story of Hoodwink in the professional scene can be considered as the latter.

Hoodwink was introduced to Captains Mode in Dota 2 patch 7.29, before the DPC Leagues Season 2 began. But a series of nerfs left the hero in a place where no one wanted to pick her up. The next two patches, patch 7.29b and patch 7.29c, did bring her some buffs, most prominently to Bushwhack, but most teams were hesitant to try out something not planned and practiced in the middle of the DPC Leagues. It took the break between the DPC Leagues and the WePlay AniMajor for teams to realize there is some potential in the hero, and ever since then, her popularity has been rising in every subsequent tournament. The rising graph hit a high in the TI10 qualifiers, when Hoodwink became the second most picked hero in all six regions, only behind Lion, with a pick rate of 40.55% (and not a bad win rate either of 53.39%). 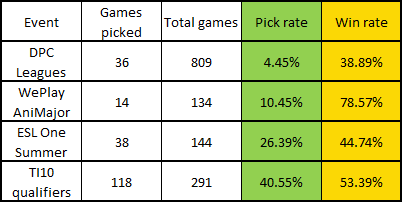 So what are the big changes that have made her such a popular hero? If it were to be a one word answer, it would be Bushwhack! The skill has seen multiple buffs to it in the patch 7.29b and 7.29c, and with the level 10 talent, has its cooldown reduced by 4 seconds (from 14 seconds to 10 seconds), which isn’t bad for a 2.4 second AoE stun. For reference, Ravage is a 2.8 second stun with a cooldown of 150 seconds (of course, the AoE for Ravage is higher and it is easier to land). Bushwhack serves as a good precursor or follow up to stuns, and especially AoE disables like Magnus’s Reverse Polarity. The Hoodwink relying on Bushwhack is played in either of the support roles, and did well in both in the TI10 qualifiers.

For the support Hoodwink, the skill build is typically maxing out Bushwhack at level 7. One or two points are taken in Acorn Shot for the tree and for some in lane harass, but Scurry is the skill that gets preference for getting maxed out after Bushwhack. Higher levels of Scurry allows the hero to be more elusive and get in dangerous areas a lot quicker.

The item build can be flexible depending on the game, the farm priority and what the team requires, but an item that is seen frequently on support is Hoodwink’s is Aether Lens. It adds range to three of her skills, allows her to stun heroes from further out and helps her to deward using Acord Shot’s tree without getting too close. Acorn Shot is also an amazing skill to get vision over the high ground when approaching  the low ground, and the additional caste range ensures more safety when doing so, in case there are dangers lurking in the dark places on the high ground.

One of the things that sets OG’s mid laner, Topias “Topson” Taavitsainen apart from other top tier mid players is his innovative nature and confidence in trying something out. Hoodwink received an Aghanim’s Scepter upgrade as well as an Aghanim’s Shard upgrade in patch 7.29, but no team seemed too intrigued in making use of it, not necessarily because it was bad, but a support farming a Scepter isn’t the easiest thing. But it is a lot more feasible for a mid laner, and Topson has made good use of it. While the mid experiment hasn’t been an overwhelming success (6 games, 3 wins, 50% win rate), OG have shown it is possible to play the hero in the mid lane and a small tipping of the scales in one direction could make Hoodwink a strong mid laner at The International. Topson maxes out Acord Shot and Bushwhack while playing a position 2 Hoodwink, which isn’t surprising as Acorn Shot is a good chunk of her damage.

The rise of Hoodwink added some spice towards the end of a meta that was getting stale. In the extended break before TI10, teams will have more time to study the hero and see what more she is capable of. In case we do end up getting a new patch before teams head to Romania, it will be interesting to see how Hoodwink is affected and whether she is pushed in the direction of one particular role or not.

Is Hoodwink an exciting hero to watch in professional games?