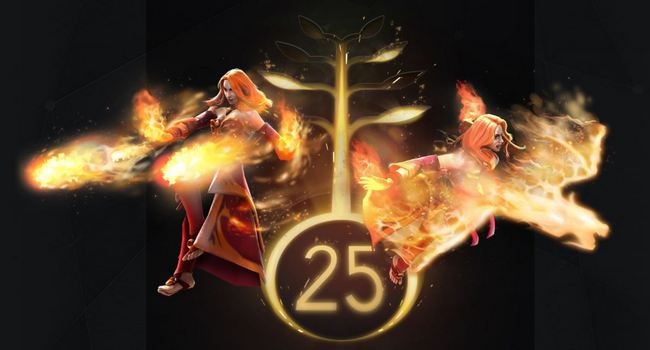 Dota 2 7.00 changed the game we love in many ways. Talents, I believe, was the most prominent change that was introduced. Earlier while the only thing to look forward to after level 16 was +2 stats at each level, now everyone wants to hit level 20 and 25 as fast as possible to reach those talents; some a lot more juicier than the others. There are a few level 25 talents though that have a massive effect on the hero that can be make or break for the game. Let’s see what the best level 25 talents are in the game and who is lucky enough to have them!

An ability to absorb 500 damage and deal the same to enemies in 675 radius every 6 seconds (5.1 seconds with the talent)? Enough said.

Battery Assault at level 4 has a duration of 10.5 seconds and a cooldown of 20 seconds. With the talent, the skill has no down time! Clockwerk can be in assault mode as long as he wants (provided he finds the mana) which makes a big difference in ganks for locking down opposition heroes.

The tornado cooldown reduction has to be one of the most irritating talents to face. The cooldown is reduced to 12 seconds from 30 seconds and gets further reduced to 9 seconds with an Octarine Core. It’s a pain going high ground against it. The AoE Defeaning Blast has been before the talents and even though I would say it isn’t as good as the Tornado cooldown reduction, it is a very good situational talent!

Lich doesn’t get to see himself become level 25 (unless you have a ‘Me Lich mid or feed’ guy in your team!). However, if he does get to there, both his level 25 talents are ones that could make a major difference. The attack speed and movement speed slow is an in built Skadi which is a good skill to have if your team is on the offensive. For games where you need to turtle up and defend high ground, the +35 Ice Armor to structures can be a massive boost for defense!

Of the two options, +35/3% Fiery Soul Per Stack wins by a mile and it converts Lina into a hot machine gun (you guess which kind of hot). The talent ensures Lina can transition from a spell caster to a right clicker very effectively in the late game, which was something that was lacking pre Dota 2 7.00.

The +100 Leap Attack Speed is basically a Troll ultimate (Troll gives a bonus attack speed of 180 while Mirana gives an additional 164) only with a lesser cooldown. It can serve as a major boost while taking objectives. The +2 Multishot Arrows serve quite well against a team fight based lineup that sticks together.

Thought Nature’s Prophet ratting couldn’t get any worse? Think again! The Removed Teleportation Cooldown on NP (not the team, the hero) is probably one of the best talents in the game. If the opposition does not have good catch, NP can lead them onto a wild goose chase. The other talent is a pretty decent one for a Scepter build. The treants end up having 70-78 damage and 1100 HP, which is decent for keeping the lanes pushed out.

The +60 s Arcane Orb Intelligence Steal gives OD a total steal time of 140 seconds. That is a lot of time to rack up intelligence steal (assuming OD stays alive) and drop a huge hammer.

Hands down the best options any hero has for their level 25 talent upgrade. +420 Gold/Min? Really? And with the ability to confer Moon Shards on ally heroes, this has even more of an advantage once Puck has all his necessary items ready. If this weren’t enough, the other talent is one that can compete with it. The added speed/distance on the Illusionary Orb let’s Puck traverse a distance of 3412.5 units in a very short time (the Orb travels at a speed of 1139.25).

The +50% Life Drain Heal Talent further bolsters Pugna’s claim as a support. At level 25, Pugna can heal an ally for 450 HP per second! Granted that his HP isn’t that high, but with a Scepter cooldown of zero seconds, it’s as simple as healing yourself on a creep and getting back to the healing. With an Aether Lens and the +150 Cast Range talent, Pugna heal an ally from a distance of 1150 units. It’s the perfect solution for a core going high ground and hitting buildings with the rest of the team behind him/her in support.

The Spell Life Steal on QoP used to be a lot more effective when it worked with Blade Mail, which is not to say it is not a good talent to get now! Combined with Octarine Core, QoP gets a total Spell Lifesteal of 95 %! A Sonic Wave hitting three heroes and you’re back to full HP! The AoE Shadow Strike isn’t bad either. Although the damage isn’t a lot for the late game, getting your enemies slowed by 50% for 15 seconds (unless they have a way to dispel the Shadow Strike) is something to be considered.

The first time Spirit Braeker charged at me with a speed of 1250, I nearly got a heart attack. That Mad Cow can outrun Puck with his additional Illusionary Orb speed! But the better one of the two talents is probably the +17% Greater Bash Chance. 34% bash chance is a one in three chance of being bashed. With an Echo Sabre, a bash is inevitable!

The ward buff talent gives Veno poison wards with an HP of 1350 and an attack of 121 and killing them off is a pain. The 14% Poison Sting Slow talent buffs up the slow to 28 % and combined with Venomous Gale, will make enemies crawl with a movement speed reduction of over 65%.

It’s hard enough to catch a bug moving invisibly with a speed of 550, imagine the agony of doing it when he does it at a speed of 750! For games where there is a lot of burst potential on the opposition, the +35% Magic Damage Resistance is a no brainer. Along with the base 25% magic resistance, Weaver ends up with a total magic resistance of 51.25%. That is more than enough to ensure you get off Time Lapse and make the enemy look stupid!

In most professional games, WK will be the fourth or last pick to ensure there’s no one to burn up all his mana and make a fool out of him. But that rarely happens in pub games. With the No Reincarnation Mana Cost talent, WK can totally ignore that blue bar and spam his stuns to glory. In case there is no one to burn mana from him, Reincarnation Casts Wraithfire Blast is a talent that can turn a gank. It’s basically a Ravage if the entire team decides to jump on to WK. The best part is, it has nothing to do with the cooldown of his skill, which enables him to cast the spell immediately upon reincarnation!

It was a long time ago when Io’s tether used to stun enemies that passed through it. Seems a bit broken right? It was, and in 6.79 the stun was changed to a 100% movement slow and 100 attack speed slow. Recently, Wisp got back the stun as a level 25 talent. It’s not every day that a Wisp gets to be level 25, but if the ball does reach there, it could prove to be a game changer!

What do you think are the best level 25 talents in the game?

Do you think level 25 talents make a big difference to the game?

Yes, some of them surely do
Thank you for voting!
No, the verdict of most games is already decided by the time heroes start getting to level 25
Thank you for voting!
Siddharth “Gopya” Gopujkar
A Mechanical Engineer who is as interested in the mechanics of DotA 2 as every machine he studies. Pursuing his Master's at the Michigan Technological University.
Share Tweet
1,127 people reacted to this post