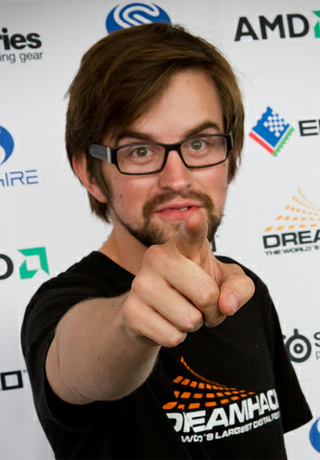 "We have 14 tournaments with around 1,7 MSEK in prize money which can be compared to the around 480,000 SEK that we had last DreamHack Summer." "In Dota 2 we did a first test tournament last winter and we believe this summer will be the next step in evolution for this game. We have increased from 8 to a total of 16 teams, learned a lot and improved the tournament layout." 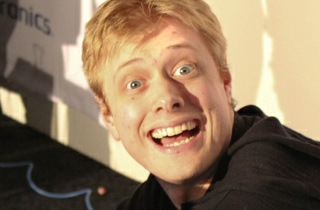 "We're bringing in Toby Dawson again but this time he will have his own Dota 2 stage where a few hundred fans can watch the whole tournament live. It will have a big-screen projection and a similar production to what you have seen from the SC2 streams earlier." 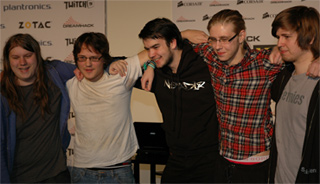 "The best thing with the tournament (and something we can't really dictate) is the quality of the starting teams. We have Na'Vi, Quantic, Mousesports, mTw, CLG, Moscow Five and the list continues... It's gonna be super exciting to follow all the action." 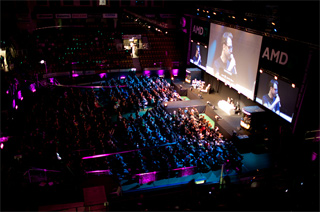 "In the end it was an epic moment for Swedish eSports and huge step for eSports as spectator sports in the whole world." 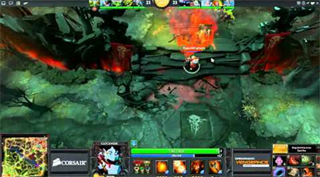 "Our goal for next year is definately to have more games in DreamHack EIZO Open. Which games? I can't tell, but MOBA titles are very interesting of course. They're great spectator games already and would fit our show format very well."

Summer is coming. How are the preparations for the event going?

It's very busy of course. We're a small team with a huge network of volunteers that are chatting/meeting everyday to prepare all the details. DreamHack Summer 2012 will be our biggest summer event ever. It's actually close to the DreamHack Winter size this time since we use all the halls in the Elmia faire for the first time on a Summer event. Pre-sales have been amazing and it's going to be a great LAN but also a great eSports event. We have 14 tournaments with around 1,7 MSEK in prize money which can be compared to the around 480,000 SEK that we had on last DreamHack Summer.

MOBA followers have sure noted that you, as one of the few big organizations out there, have the big three, HON, LOL and DOTA2, titles. You said last year that all the games belonged at DreamHack - which is healthy despite of what fanatic game followers say. How do you deal with managing all these three big tournaments, though? How much administration and workload is put on the publishers in this case?

Yes. I think we're the first event organization in the eSports world to offer tournaments in the three biggest MOBA games at the same event. There's gonna be some epic shit for all the people attending DreamHack Summer 2012 since we have both Dota, HoN and LoL fans attending and they can just pick their favorite, and either play in the tournament or watch the pros playing. It's a huge step for us and one of the unique things with this summer event.

DreamHack loves MOBA and we believe all of these games offer something unique for their particular audience and all three should be a vital part of DreamHack moving forward. We also believe that all 3 games have a very different audience when you compare the different communities. That's also why you see all these discussions in the forums all the time between LoL fans, Dota fans and HoN fans.

When it comes to the admin part of it, it's a huge task. We're pretty comfortable with Heroes of Newerth since we've been doing it for so many years. League of Legends is new to us, even though we had RIOT on-site last time to host the Season 1 finals, we haven't organized something this big yet in LoL. In Dota 2 we did a first test tournament last winter and we believe this summer will be the next step in the evolution for this game. We have increased from 8 to a total of 16 teams, learned a lot and improved the tournament layout. In all 3 games we have recruited great head admins that will have the main responsibility of each tournament. They also have an smaller army of very smart match admins that will take care of the tournament, teams and players.

Planning, hosting and executing tournaments is all about experience. We have huge experience from hosting eSports tournaments in general and we never see one tournament at one event as the end destination. It will never be perfect and we try to improve from event to event. If you compare our first StarCraft II tournament at DreamHack Winter 2010 (Cointoss for example) with DreamHack EIZO Open Stockholm (visualize the Thorzain clip!) It's actually mindblowing. It's a huge process and we're never satisfied. It's all about improving layout and structure for each event that comes by.

How have you planned out the Dota 2 tournament? What will be different aside from the 8 added participating teams? What will the fans take note of in this edition compared to last year?

First of all we have increased the prize purse from 100,000 SEK to 200,000 SEK, thanks to our head sponsor Corsair that will support both our Summer and Winter tournaments in Dota 2. The second thing is that all DreamHack participants get free BETA keys thanks to our co-operation with Valve. The DreamHack participants can actually get the key directly after they bought the ticket, so we think this will increase the participation in the BYOC qualifier a lot where we have 256 open team slots. The third and single most important thing is that we have increased the quality of the media production a lot. We're bringing in Toby Dawson again, but this time he will have his own Dota 2 stage where a few hundred fans can watch the whole tournament live. It will have a big-screen projection and a similar production you have seen from the SC2 streams earlier. The grand final will be played on prime time Monday evening in DreamArena Extreme, just before the StarCraft 2 final so expect a lot of hype and some huge atmoshpere in the arena. Last but not least, the best thing about the tournament (and something we can't really dictate) is the quality of the starting teams. We have Na'Vi, Quantic, Mousesports, mTw, CLG, Moscow Five and the list continues... It's gonna be super exciting to follow all the action.

The MOBA games have always attracted a huge audience at DreamHack events. Looking at last winter's StarCraft 2 event - when you filled up the hockey stadium Kinnarps Arena - how come you don't use the stadium in the summer event? Do you have plans to revisit it in the winter?

Kinnarps Arena was a huge thing for us. Both in positive and negative remarks. Since we did it with very little preparation time and also built the arena set-up in only 18 hours with a lot of technical difficulties. Some of our staff had to work so many hours to make this dream come true and we're very thankful when we think of all the people that made this possible. But in the end it was an epic moment for Swedish eSports and a huge step for eSports as spectator sports in the whole world. It was a huge receipt for the DreamHack organisation since we started our progress as standalone eSports event 5-6 years ago and now we finally reached a destination that we and all the people who have worked with eSports have dreamt about for so many years.

So... DreamHack will of course return to Kinnarps Arena, and we're already planning it. It's gonna be bigger and better next time. But we'll keep it exclusive to DreamHack Winter. Winter is our biggest event, it's late November so it's a perfect end-of-year event where we sums up all our yearly tournaments, including the DreamHack EIZO Open, in front of a huge audience. We have already booked the arena for Winter and we'll present the details later on.

So is that a yes for having DOTA2 or the other MOBAS in there? :)

I'm not giving any promises. The first time we didn't have any 5vs5 games on the arena, but we really want to have 5vs5 games this winter and hopefully we can pull it off, haha.

You have a concept for StarCraft 2, in the EIZO Opens, that you take your tournament concepts and do them in other parts of Europe. Do you think that this concept would work for other games as well, like DOTA2? How do you and the rest of the eSport team plan these concepts - what factors do you take into account?

In 2010/2011 a lot of things changed for DreamHack and also for eSports in Sweden. Thanks to StarCraft 2, the interest for eSports increased a lot, and I think our invitational tournaments had a great purpose. We could introduce a new event/entertainment format for the Swedish (Stockholm Invitational) and Spanish audience (Valencia Invitational) where HYPE was almost guarenteed.

However, when we sat down and planned our strategy long term we realized that Invitational is not benefiting the community in the long run. All players need to rely on us being nice and invite them. We don't like that system. Less known players are hurt from that system. So we kept the Invitational show format (7 matches in a row with full media production with audience interaction and all that jazz) but added an open qualification session and one extra event date. We change the name to DreamHack Open to emphasize the new tournament structure. That's the reason we changed it.

We also felt that DreamHack had a bit of a confusing layout for fans, media and spectators. We had to slimline our seasons and create something easier to understand for old and new fans . So we created two main seasons: DreamHack Open, our international eSports format that ends up with a Grand Final at DreamHack Winter, and we created E-sport SM, a Swedish Championship with 5 games. The latter will consist of Swedish qualifier events and a grand final at DreamHack Summer.

Finally, what are your hopes for the tournaments this summer? What do you yourself look forward to the most?

I hope it's gonna be a great festival! I think we have very strong attendance in all our tournaments, including all the MOBA titles, StarCraft 2 but also Counter-Strike 1.6 and Quake Live. It's really cool that gamers seems to return to DreamHack even though we don't offer the same prize money as many of the other top leagues out there do, nor paying up for fancy accommodation in casino hotels. I think we offer something else - a unique experience you can't find elsewhere.

I think this is the most competitive DreamHack festival ever looking at the teams and players already qualified or invited for the tournaments. Following StarCraft 2 and Dreamhack EIZO Open, it's going to be interesting to see what players will grab the DreamHack points in top 16 since we only have 24 slots in the grand final at DreamHack Winter 2012. Attending many events and grab points will be very important. A player like Ret (3-4th in Stockholm) could easily secure his Dreamhack Winter spot with a good result in this event. The final feature is the 550,000 SEK in prize money that the players don't want to miss out on.

Summer and Winter are very different to an event like EIZO Open Stockholm (or Valencia/Bukarest). There's so much going on, it's a very special feeling. We'll offer around 10-15 official streams in different games, but also additional community streams - but it's almost impossible for the fans to follow all the action. Even I, as one of the head organizers, have a hard time following everything even though I'm part of the scheduling. But that's DreamHack - it's a very rare and crazy phenomenon.
“Raistlin”
Share Tweet
0 people reacted to this post