Tournament links
VALORANT Champions Tour 2023: LOCK//IN São Paulo is an offline tournament that will be held in Ginásio do Ibirapuera, São Paulo and organized by Riot Games. This tournament will feature 32 top teams from different region. This S-tier tournament will takes place from February 2, 2023 to March 4, 2023. The main format of this tournament is 32 top teams will compete in Single-Elimination with Bo3 series and the Grand Finals will have a Bo5 series.
Sponsor: Riot Games

With just a few more days to the VCT LOCK//IN São Paulo, DRX has made one significant change to its starting lineup, having replaced Zest with Foxy9.
Valorant 08/02/2023, 08:10 GravityWillFall

Show some love to your favourite teams to go with the limited-edition, exclusive Misericórdia knives as well as player cards and a new spray.
Valorant 03/02/2023, 14:05 GravityWillFall
All related news & features 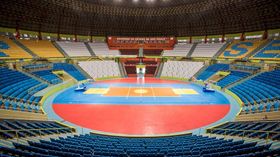 Ginásio do Ibirapuera
São Paulo, Brazil
This website uses cookies to ensure that you get the best experience Read more