Ethan Arnold United States 0
He may be the youngest player on the team, but that doesn’t hold him back. He already holds several major titles including IEM Shanghai 2018, cs_summit 3, and ESL One New York 2019, as well as MVP as StarSeries i-League Season 8. Vocal in and out of game, Ethan is another jack-of-all-trades when it comes to rifles including the AWP (second only to CeRq), and you can always count on him for help mid-game.
Notifications 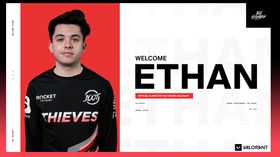