After weeks of preparation and coding, the Hearthstone section of GosuGamers is finally here, with a plethora of features to make covering the full scope of the game easy for both readers and writers.

It was in early November during the Innkeeper's Invitational that we first decided to venture into Hearthstone. Although the game didn't exactly fit our gaming portfolio at that time - GosuGamers being focused strictly on established eSports titles - we fell in love with it immediately. Over the course of the next two months, we laid the foundations by writing editorials, class and crafting guides, tournament features and deck analyses as well as provided a steady stream of newsposts on everything Hearthstone. At that time, we knew Blizzard's card game will have a place of its own at GosuGamers.

Jumping in 2014, the section (which was still hidden at that moment in time) grew even bigger. The guides we wrote were warmly accepted by the vibrant Hearthstone communities such as reddit and the editorial crew became bigger. By the end of January, writers from StarCraft 2, League of Legends, Heroes of Newerth as well as some without previous writing experience had contributed to the section and a dedicated coverage team was formed. We became official coverage partners of eHL Season 1. We added more and more features each day, coding new or modifying already existing ones to give you, our readers, the best possible Hearthstone coverage experience there is.

On February 14, after weeks of preparation, GosuGamers Hearthstone was officially launched. Get acquainted with its face and give it a warm welcome!

Written content has been the heart of GosuGamers since the beginning of the site and the Hearthstone section is no exception. Our editorial team is prepared to bring you everything Hearthstone in forms of news or featured content and will do so on a regular basis. If you're unsure how to play a certain class, our guides will help you with that. If you're having doubts about what to craft for your Hunter aggro, there will be something on that too. Every day, you'll be able to catch up to all events, learn who won what and how, what tournaments have been announced, which decks won the last Managrind tournament and so on.

In the near future, the features and guides will be organized by classes so you can more easily find them. Finding our article on Reynad's aggro Warrior, for example, will be just a few clicks away and will spare you the digging around the website. We want you to have every piece of important content within hand's reach at all times and categorize in a neat way.

Finally, you'll often find that card names are coloured differently in news and features. This is thanks to our tooltip and at every time you can hover over card's name to have its picture pop or click on it to go to card's own page. 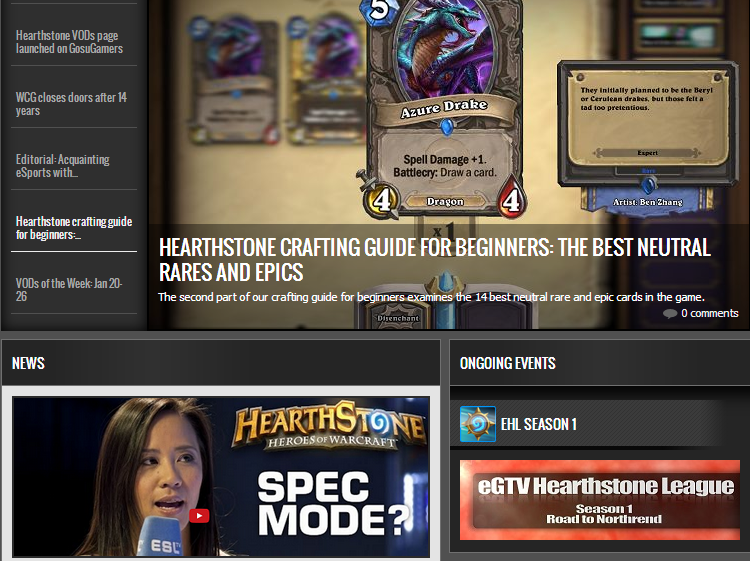 As we've never covered a game like Hearthstone in the past, we had to make adjustments to the site. The most important of those were, obviously, the card database, the deckbuilder and the deck archives.

The card database has every card that can be unlocked or crafted in the game. The cards have their specs like mana cost, type, class, attack/health/durability and mechanics listed so it's easy to find, say, all Shaman cards with taunt, all neutral minions with charge, all 4-mana Druid spells, every weapon in the game and so on. The cards can be viewed both in grid mode with full images or in a list mode.

Clicking on a card will get you to card's own mini page. There it'll have its normal and golden images listed, all the info about the card as well as its patch history. Our deckbuilder is a standard one and should be fairly easy to use. You can find cards by typing their name, searching for rarity, attack/health/mana cost ranges, mechanics or types and add them by simply left clicking on them. Right click, on the other hand, will remove one copy of the card from the deck.

We kindly ask you to drop us any feedback on the deckbuilder tool in the forum thread. We already got some suggestions from our reader Cultofneurisis and we'll be implementing them as soon as possible but there might always be something else we can add to make it better.

Finally, every deck that has been created by GosuCrew or readers alike goes to our deck archives section. As the archives are directly linked to our match pages (see below), expect there to be new decks from the competitive scene every day. As of now, you can filter decks by class or text (like writing "control" and clicking the "Shaman" icon to find all control Shaman decks in the database) and we're planning to add even more filters in the future (like tournaments where the deck has been played, players who used it, etc.). 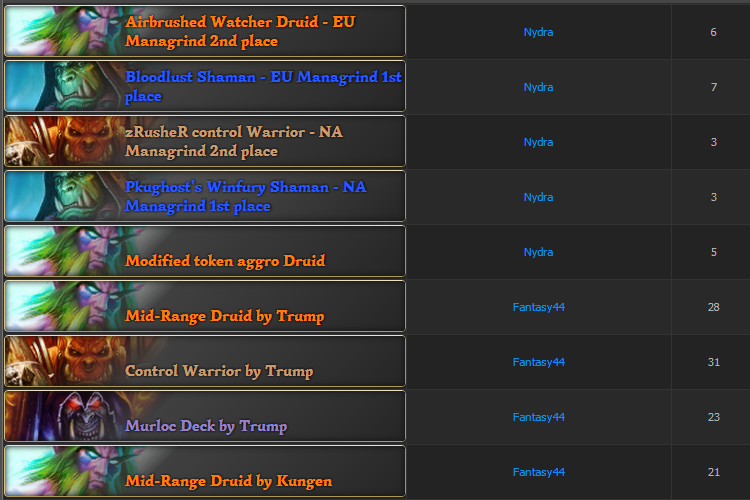 We currently have one of the most extensive categorized VOD databases in the Hearthstone scene. Fresh footage is uploaded daily and currently the section is sitting at more than 250 VODs from almost 20 different tournaments.

What makes our VOD section unique is the ability to filter out content by a number of criteria. You can quickly find all the games from a specific tournament or featuring a particular class or a player. You can also search for multiple criteria at ones, like filtering out all games in one Class-vs-Class match-up, find where Artosis played Kripparrian last or search for all VODs of StrifeCro's Druid.

What's more, because everything on GosuGamers is interlinked, the VOD section will show an icon indicating if there's a decklist attached to it. Clicking on a link will get you to the match page and the VOD will pop up. If there're decklists attached to it, they'll be displayed below! Neat, right?

The VOD section gives you all the relevant info: game rating, class played, decklist attached yes/no, players and their country flags, the tournament which it belongs to, the date the VOD was uploaded, whether or not it's a "Recommended VOD" (or "RV") and whether or not it's less than a day old!

Below: The Realz vs Razor matchpage from King of the Hill 12 shows the VOD and the decklists in one place. 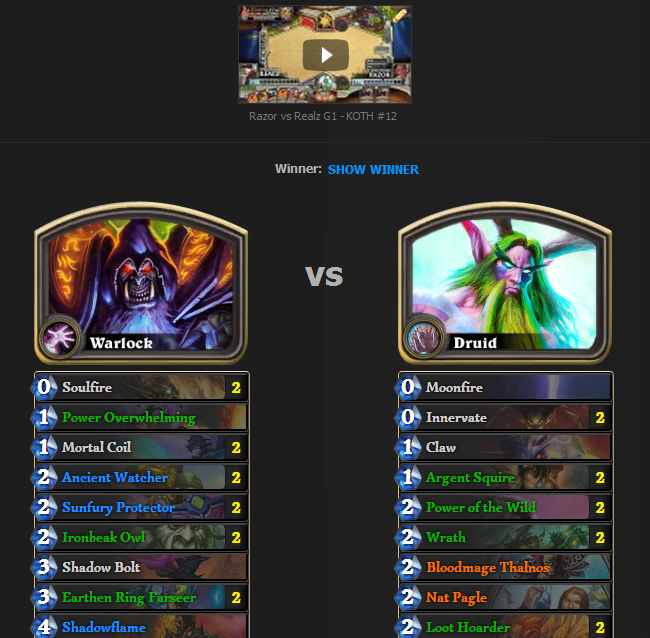 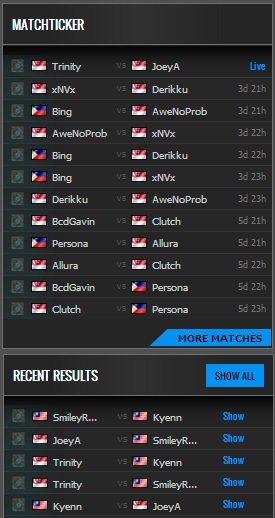 The matchticker has been one of GosuGamers' strongest features and we're glad to have it on the Hearthstone section as well. At every single moment, you'll know what matches are upcoming, when and for which tournament. There's also a dedicated column for all the recent results (spoiler-free, of course) so you can keep yourself up to date with all the events from the competitive scene.

Clicking on a match will get you to the page for that particular game. If the match is yet to be played, you'll see information like players' rank in the GosuRanking, their recent performances in the form of an Elo graph, past encounters (if there have been any) and, of course, the date and time when the match will be played. You'll also be able to place a GosuBet on it! For example, check out the Savjz/Reynad face-off in Deck Wars.

Every match that a competitor players affects the global GosuRankings as well. The points that he/she wins or loses are determined by the ranking of his opponent as well as the ranking of the tournament so if a low-ranked player beats a high-ranked opponent in an important tournament like Fight Night, he/she will win more points that if he/she beats an opponent with similar Elo in a smaller cup like ESL Weekly Cup.

The rankings change dynamically so at any point of time you can type in a player to see where he's currently ranked. 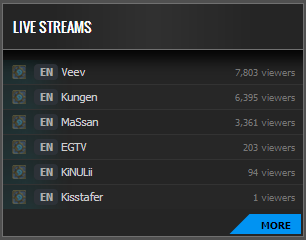 Note: Because the scene is still very small, the change in the rankings are a little bit drastic as the games each player has played are often in the single digits. We expect the rankings to stabilize a few months from now so don't take them as the ultimate indicator on who the best players are just yet.

Our Hearthstone section also has a dedicated box for Hearthstone streams. It displays the language of the stream, its name and how many people are watching at the current moment. More than 30 streams have been added to our system and we're updating that on a weekly basis.

At the end of the day, we built this Hearthstone section to be comfortable for you and give you the best user experience possible. At the same time, we fully realize that there are stuff we missed or stuff we could've done better and we hope we can hear from your regarding anything you'd like to see on GosuGamers Hearthstone.

Leave your feedback in the dedicated forum thread and we'll make sure to pass it onto the people in charge.

Thank you for supporting GosuGamers (and reading this wall of text).