EG back in form in G-1 League. Dignitas eliminated

EG beats Team Dignitas cleanly with 2-0 wins. Team EG will battle it out tomorrow with Team Liquid for a position in the lower bracket finals

EG comes on top 2-0 over Team Dignitas in the North American Dota showdown. EG truly shown their experience in the two games, also with Maelk back in the team; EG definitely looked stronger. Now only four teams remain in the competition to fight for the top two spots in order to travel to China for the G-1 League offline finals in Shanghai on the 24th of May.

14:00 CEST tomorrow, EG will face Team Liquid to decide who will be moving forward into the LB final.

Game one, EG went for the offensive tri-lane to shut down Luna's farm, Luna struggled to get more than one creep per minute. EG's tri-lane successfully caught Luna out within two minutes of the game, taking first blood. EG took the initiative in the early game with good rotations coming from both Rubick and Storm Spirit in taking down the unorthodox offlane Warlock.

The strong ganking line-up from EG really got punished for being overly aggressive by the five men Dota from Dignitas. The strong counter initiation from reverse polarity and Worlock's ultimate completely muted EG's strong synergy of the Naix bomb with Storm Spirit.

The mid game started passively. EG managed to grab an aegis for storm at the 31st minute mark; however at the cost of losing 4 heroes. Three minutes later, Dignitas tried to breach high ground. Team EG defended bravely. Fear with a blink dagger skilfully stole Worlock's Aghanim Choas Offering, completely turning the team fight in EG's favour; killing off four Dignitas core heroes. Despite winning an important team fight. Dignitas came back stronger and took the middle barracks. With one barracks down, EG somehow found a way back into the game by picking off solo heroes due to the strong initiation and mobility of the Storm Spirit and Naix combination. Now EG had the number advantage, EG took down two sets of barracks right off the bat. Dignitas with key spells off cool down decided to go for one last push, however EG team wiped Dignitas in the process. Clinkz and Naix just had too much farm, too much damage for team Dignitas to handle. Dignitas soon called the GG. 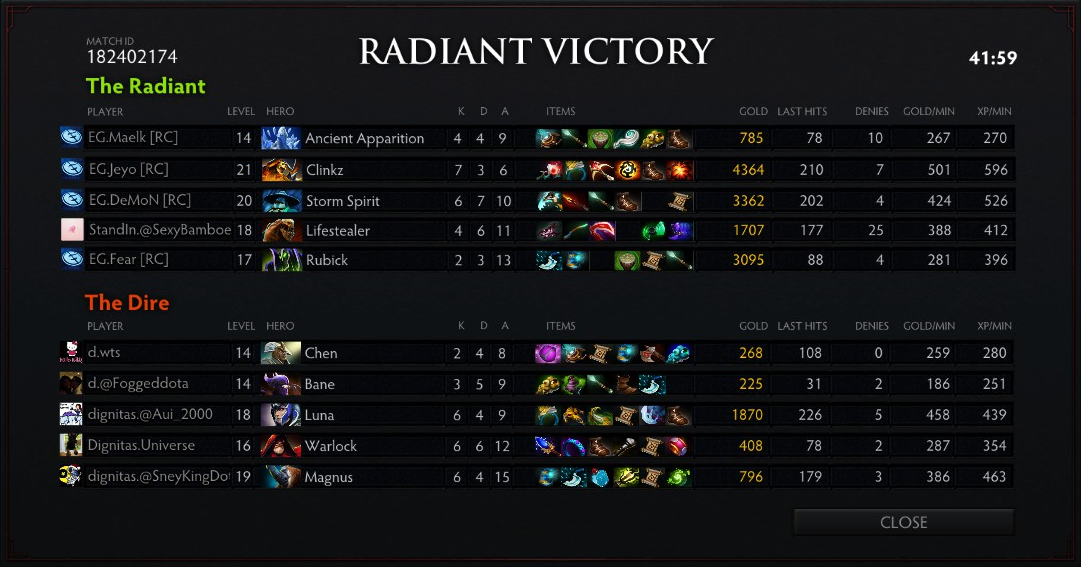 Team EG wanted to get a good early game advantage due to the highly greedy line-up from Dignitas. EG really forced the issue by diving the tier one tower at the third minute trying to take down a dual lane Chaos Knight and Wisp. Fear's Rubick got taken down for first blood for his over aggression. The early game strongly favoured Dignitas. The Chaos Knight and Wisp dual lane completely shut down the Templar Assassin. The offensive tri-lane from EG struggled to pressurise the Puck and the Weaver had an easy time on the offlane.

Team Dignitas failed to snowball away with the Chaos Knight and Wisp combo in the mid game, instead EG clawed their way back into the game with impressive counter ganks. Maelk managed to always catch at least three heroes in the ice path. EG came on top in the small scrappy skirmishes. Once the EG core heroes farmed up important items, Juggernaut, Bat Rider and Tempar Assassin started to pick off heroes from left right and centre. 32minutes into the game EG leads 20-9.

Team EG furthered their lead by taking Roshan at the 38th minute mark, with an Aegis on hand. Team EG soon took middle barracks, in the process completely destroying Dignitas. Dignitas congratulates EG on the win. 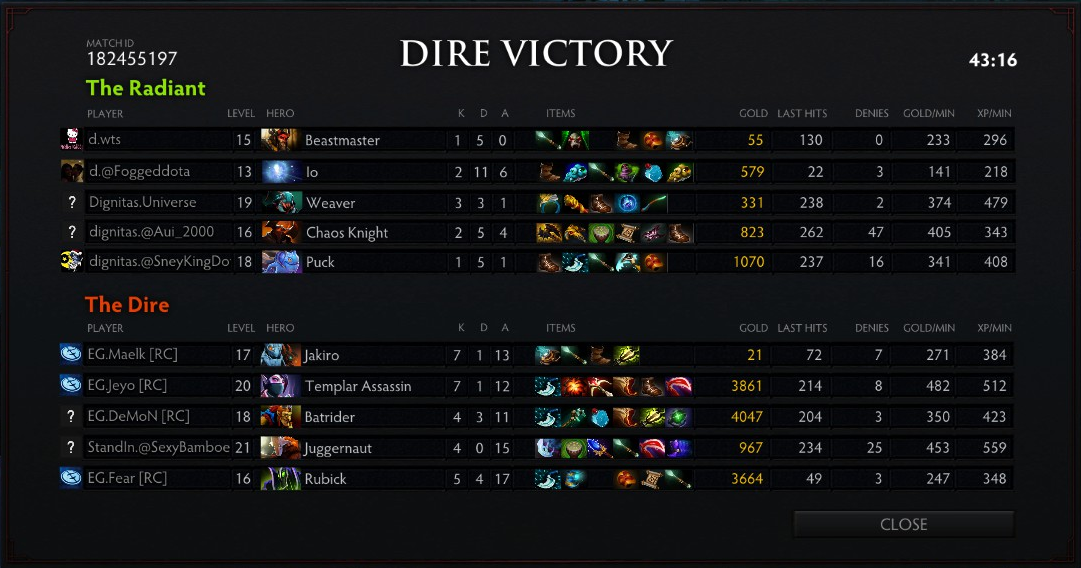