Team Dignitas eliminates Mouz with a 2-1 win. Dignitas will continue to fight another day, their next opponent will be the loser between EG and Fnatic.eu

Mousesports stumbled out of the race for G-1 League after Team Dignitas took them down in the first round of the loser bracket. While Mousesports have been eliminated, Dignitas will be going up against the loser of Fnatic versus EG on the 27th of April.

G-1 League will continue tomorrow with the third round of the winner bracket. Starting off with Evil Geniuses versus Fnatic at 10:00 CEST, both the teams have not encountered each other in the last two months. The last time they faced each other was way back in RaidCall D2L round robin stage where Fnatic came out on top. The winner will secure a spot for themselves in the winner bracket final while the loser will drop into the loser bracket.

Following that at 14:00 CEST, Na`Vi and Alliance, arguably the two strongest in Europe right now will be going head on in what seems to be a match in EMS One that was not meant to be. The loser from this match will be going into the loser bracket to face Team Liquid.

A slow passive start to game one with both teams content on farming. Despite zero kills nine minutes into the game, Dignitas were definitely more efficient in farming lanes as well as the jungle, gaining a 2500 gold lead. The first blood came from the USA team taking down Bane elemental, from the innovative combination of SneyKing's surged and ion shelled Templer Assassin completely ripping the Mouz line-up in to shreds. The Templar Assassin selection definitely punished Mouz for not picking up heroes that had damage-over-time.

The game became from bad to worse for Mouz with Team Dignitas taking down Roshan at the 16th minute mark. With a 9-1 kill lead,Dignitas simply snowballed out of control. Team Dignitas put on further pressure by taking down easy towers. Two minutes after taking down Roshan, Mouz calls the quick GG as Mouz's core heroes simply did not have the farm or the items required to put up a decent team fight. The game was a complete stomp for Dignitas, the score was 14-1. 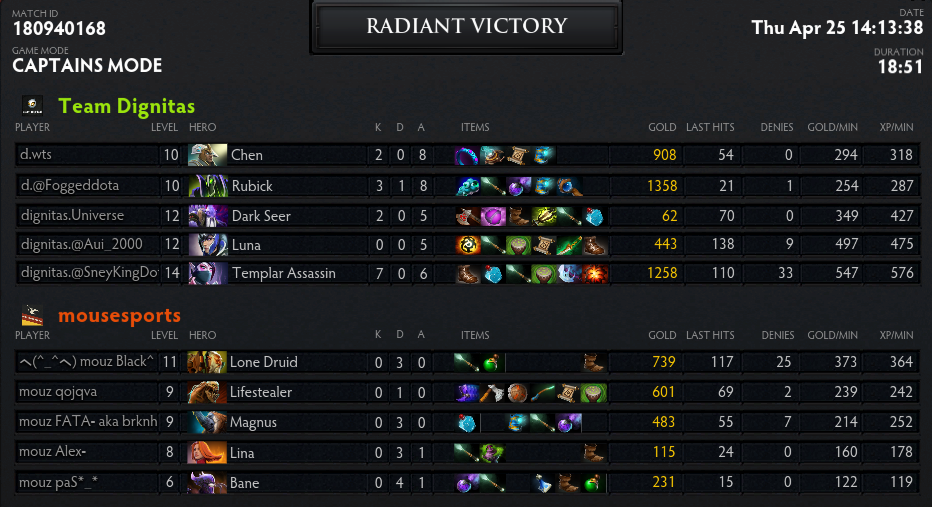 Game two started in the favour of Mouz, getting a fast first blood on Dark Seer, from Universe playing overly aggressive on the offlane. Team Dignitas went further behind as Sneyking's Templar Assassin gave up his life over an illusion rune. Dignitas tried to save Sneyking by committing more heroes to the fight; however Mouz came on top in those small skirmishes. The score becomes 10-2 to Mouz.

The USA team clawed back the game ever so slightly by sneaking the Roshan at the 12th minute. The mid game became more passive, with both teams farming safely. The farming game definitely favoured the Mouz line-up, with the immense late power of the Phantom Lancer. 24 minutes into the game, Mouz took an uncontested Roshan, as well as increasing the team gold lead to 7,500. Mouz put their lead into great use, picking off Dignitas heroes like flies. Mouz exerted more pressure as the German powerhouse team went to take bottom barracks after team wiping Team Dignitas. Dignitas soon calls the GG. 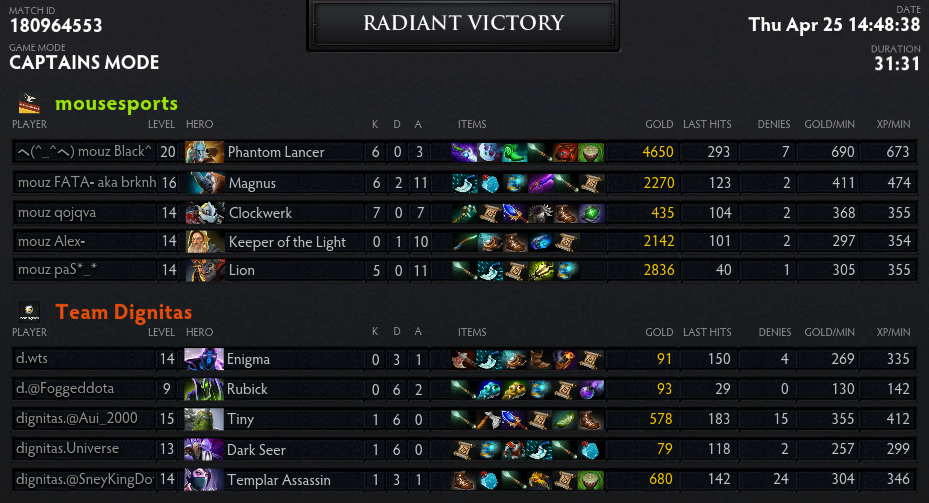 Team Dignitas opted for the offensive tri-lane with Luna, Undying and Rubick to shut down Black's Phantom Lancer. Despite Dignitas giving up the early first blood to Mouz in the Tri-lane, Dignitas fought strongly and got two quick counter kills.

Unlike the first two games, game three was really back and forth. The mid game was littered with messy team fights with both teams trading evenly. Team Dignitas had the early tower advantage, with Mouz's middle tower down. Dignitas took Roshan by the 18th minute, giving the Aegis to the Gyrocopter. Ten minutes after the first Roshan, Dignitas took another uncontested Aegis as team Dignitas had already taken down all Mouz's tier two towers, giving Dignitas the superior map control.

Dignitas played a patient pushing game. With the superior map control, Dignitas opted for starvation Dota, farming Mouz's jungle. A massive team fight broke out by the Mouz's bottom tower, where Dignitas came away taking down a set of barracks at the cost of Luna and Gyroscopter's death. While Dignitas went for the third Roshan, Black led an army of illusions to take down the top barracks; however the fight was too rushed. Rubick stole Reverse Polarity and landed it on three crucial heroes. All Mouz could do was run. Dignitas now with Aegis and Cheese decided to go for the GG push, successfully taking down another set of barracks. Mouz called the 42nd minutes GG. 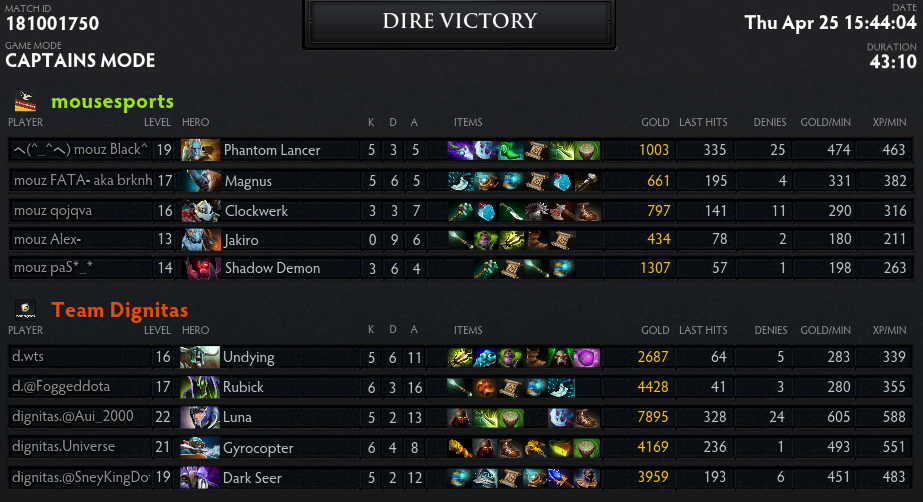