CJ Frost score a second draw against NaJin Shield while the reigning champions of Sword finally get their first win of the tournament.

KT Rolster A vs NaJin Sword

Both teams trod very carefully and only aimed at getting the first towers down and thus first blood only came at around the 8th minute mark after an overextension by Maknoon. From there, the pace picked up a bit: KT scored another two kills but Sword were quick on the recovery. A push of theirs lessened the kill gap, got them mid tower and opened a possibility for a dragon fight.

It was during that dragon fight that the game exploded. A stacked Crescendo over an Equalizer yielded a perfect ace and four kills for Rumble. To but it bluntly, KT A were screwed. 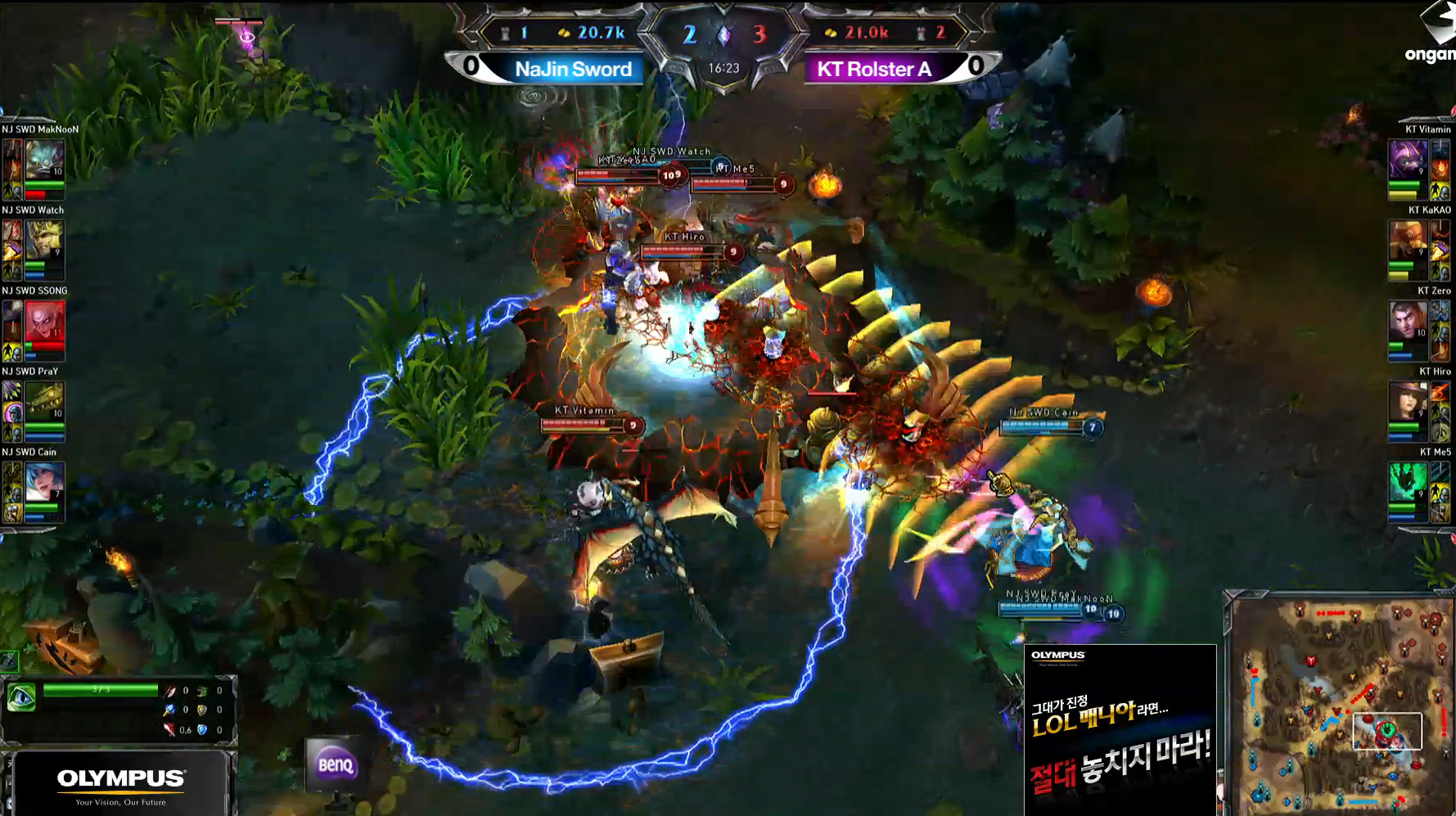 An analogical team fight, this time on top lane, pushed the score to 11-4 in Sword's favor but although hugely in the lead, NSW weren't quite able to uproot KT A. The game on for twenty more minutes with Sword picking a kill or tower here and there and not until a large team fight right after Najin took baron and another one south of the dragon pit did KT A tapped out.


Game two developed almost analogically. KT A took the kill lead during the laning phase but once that was over, they were treated to the superior team fighting skills of Najin Sword. Running a global Nocturne/Twisted Fate combination allowed the reigning champions to dive onto KT's carries and by the 28th minute mark, Varus and Ahri were on an aggregate 2/8 score. Meanwhile, Watch was readily giving his life so that TF, Diana and Twitch can prosper and at the 32nd minute KT Rolster saw their nexus fall under the immense pressure of Najin's carries. 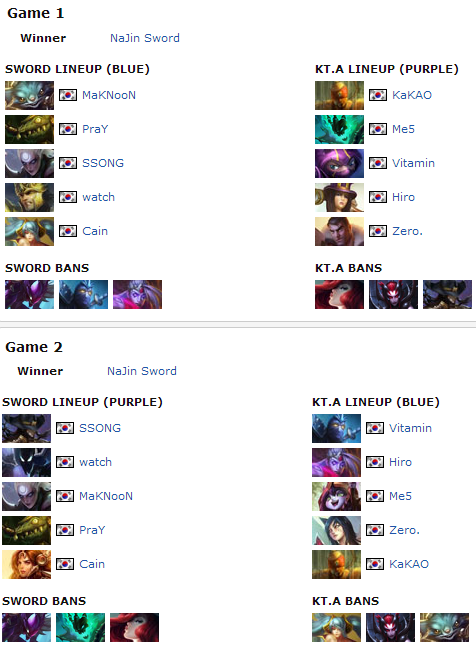 No successful early-game ganks made for a slow tempo as Frost took on Shield for the second series of the day. First blood went to CloudTemplar around the 8th minute but the game kept its stable, low kill pace. In those moments, it was Frost who took advantage, securing the first three kills of the game and getting in the lead.

The first major team fight broke out around the 17th minute mark around the blue buff of red team. Catching NaJin Shield out of position allowed Frost to blow up Nofe before the fight had even started, essentially making it a 5v4 engagement with Shield nowhere to run. Triple kill was secured for Shy and the snowballing began. 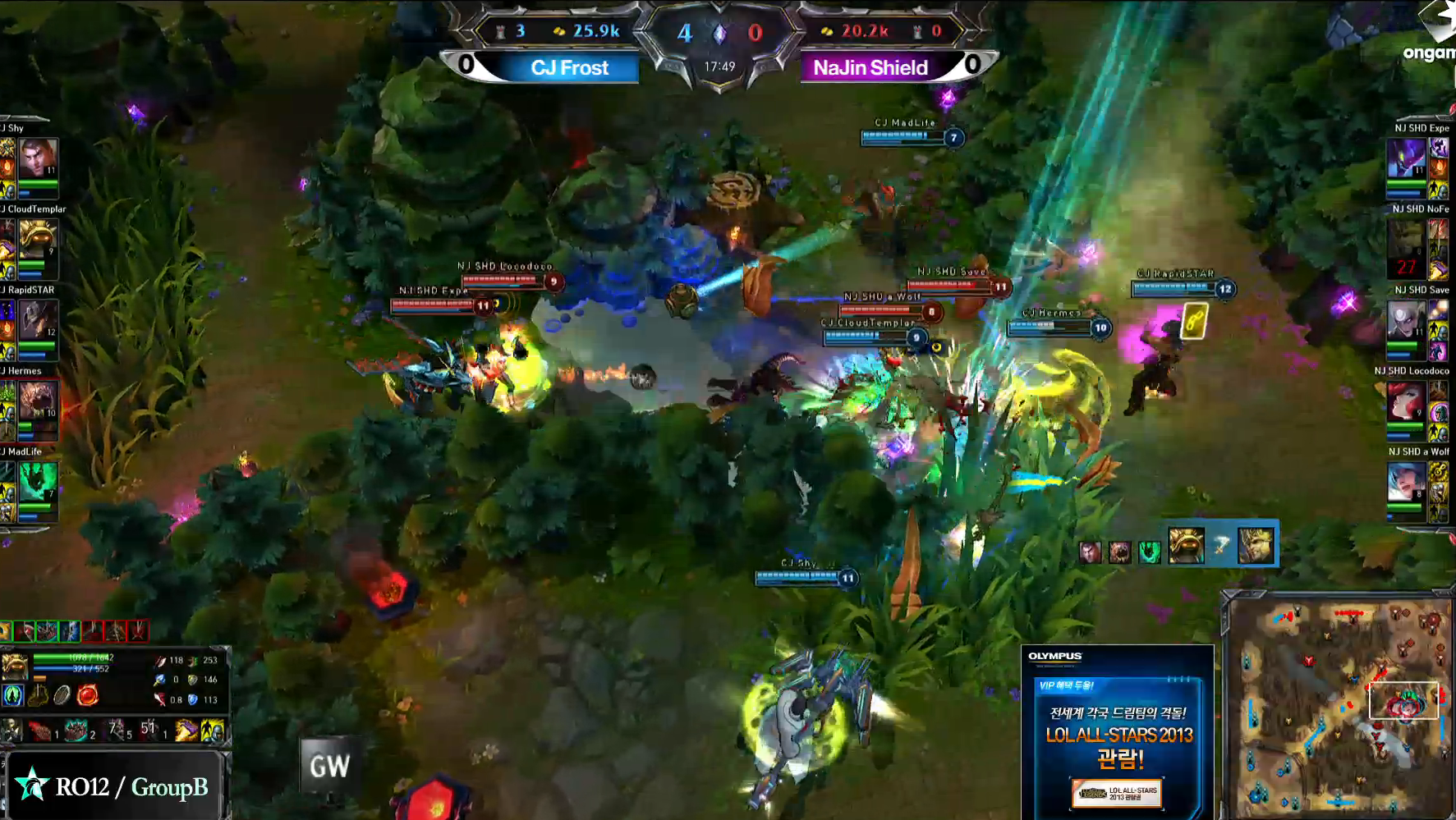 The first major fight of the game. Triple kill for Shy incoming

The minutes that followed were colored by Frost sticking to their advantages and chipping away at Shield, getting a kill or objective whenever they can while searching for a team fight. When they found one, the outcome was disastrous for the Najins. Shy's early kills and RapidStar's outstanding farming buffed Frost's DPS to high heavens while MadLife's Thresh was doing what MadLife's Thresh likes to do - keep everyone alive. Three team fights later, at 30 minute o'clock, Frost took down NaJin's nexus at 20-4.


Game two was almost a complete turn around. RapidStar gave up first blood to Save and was caught a second time a minute later, allowing Shield's Diana to essentially snowball out of control. Expression's Rumble was also doing wonders and, if things weren't tough enough for Frost already, NoFe's ganks kept coming and coming, either preventing a Rammus gank or securing a kill for Shield.

As a result, Shield diligently marched into a mid-game where they had every possible advantage. The DPS they could put out was incomparable to what Frost were packing as neither Lux, Jayce or Twitch were enjoying a particularly strong firepower. Several team fights like the one below came as proof for Shield's dominance and at the 32nd with 18-2 in kills they brought down Frost's nexus. 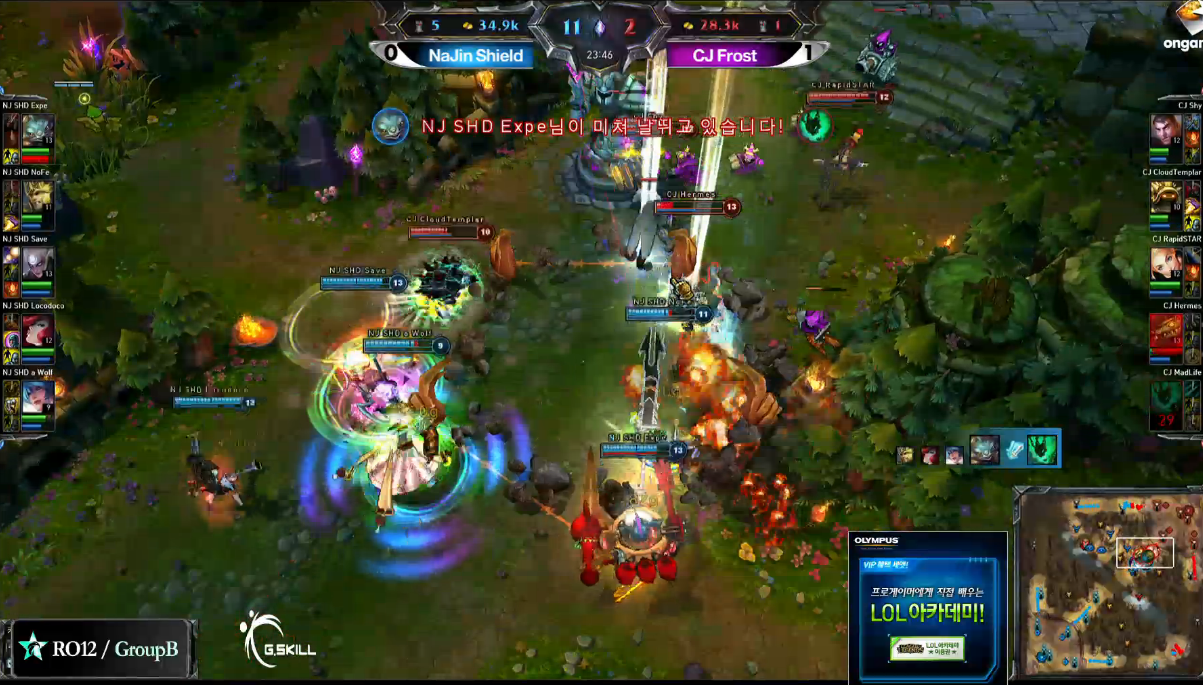 Frost's bot lane evaporates during the first seconds of the engagement. CloudTemplar is not blooming with life either 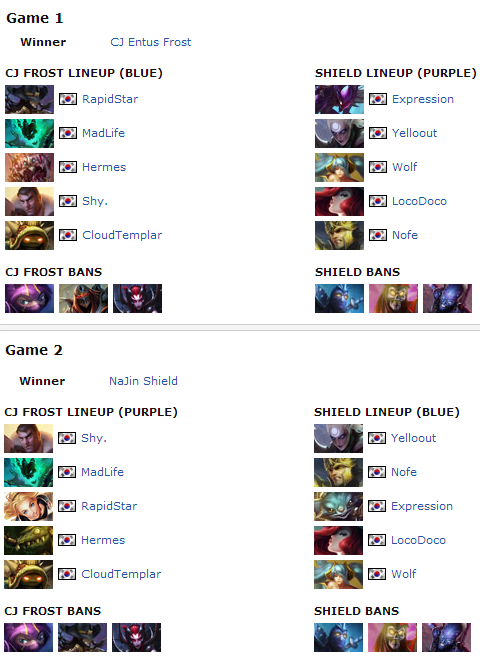 Although unable to secure the 2-0 today, Forst are still without a loss in Group B and with 1-2-0 they are second behind KT Rolster B. Meanwhile, Group A is still under the leadership of SKT 2, with MVP Blue, Blaze and Sword all tied 1-1-1.