The Chinese display impressive performances throughout both games, outplaying Orange. Rattlesnake made sure to not give Orange any space during the midgame and their coordination in teamfights was just superior.

Rattlesnake put up an aggressive trilane to deny Mushi's Morphling space to farm and it started out well as they held the advantage in the lane. Icy farmed well and they even got first blood on Rubick. But one bad engagement turned the tides in this trilane as Mushi picked up a triple kill for the price of Net. Rattlesnake stayed calm and they were winning out on the other lanes.

Orange tried to make room and rotated two heroes to gank Luo's SF, but timely tp's traded Mag and TA for Luo. Orange went on and traded badly, giving away core heroes for the price of one. Rattlesnake gained the map control and given their natural advantage they had no problem securing Roshan twice without the Radiant contesting.

The second Aegis encouraged the Chinese to slow siege the bottom lane with the healing ward and the Malaysians could only watch as their first base tower fell. A questionable decision by Ky.xY to jump out of the base only to get a two man RP cost them one set of racks as the Dire wiped the enemy line-up, trading only an Aegis.

A failed smoke gank outside their base sealed the deal for Orange, as Rattlesnake once again killed all of Orange. 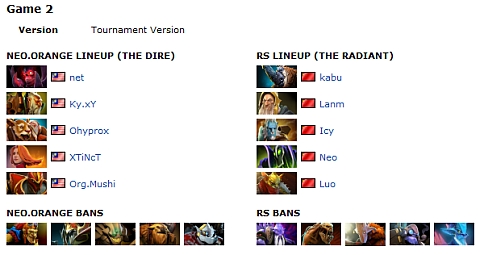 Once again the Chinese opted for an aggressive trilane, but Orange did not want to contest with the KotL, leaving the Lone Druid solo against them on his safelane and both supports roaming around. Two early kills on Icy's PL in mid gave Mushi a big advantage and Rattlesnake's trilane did not achieve anything.

It looked dim but as soon as Luo rotated with his Track, things turned around for Rattlesnake. Orange managed to secure several towers, but the Radiant made sure to keep up in farm by killing multiple heroes with tracks. The Chinese snowballed in terms of farm and won multiple engagements. Even when they were forced to use buyback on two heroes, Rattlesnake managed to stay on top, trading more efficient than the Malaysians.

Orange were completely outfarmed at this point and had no way to trade properly in teamfights, whereas Rattlesnake took down tower after tower and breached highground without any problems. Without a significant RP, the Chinese took down the whole Dire line-up and took down the base, forcing out the second GG.

Rattlesnake will play their second group of the game on Sunday, against LGD.int. The G-1 League action continues however tomorrow with group B, as DK takes on Zenith. The games will start at 12:30 CET, covered by Ayesee and BeyondTheSummit.