Zenith approached the first game trying to outstrat the fellow countrymen, First Departure with a Invoker and a Timbersaw pick. This is the first time Timbersaw has been picked in a competitive SEA tournament. Despite having the element of surprise, Zenith decided to opt for a support Timbersaw which did not work out well for the team.

First Departure was off to a flying start with the free-farming Morphling saving up to 4,000 gold in mere 11 minutes. Exort Invoker did not work out particularly well for Zenith either due to the fact that they abandoned the off-lane and FD's Clockwerk was standing way behind their tower. FD took advantage of Zenith's failed strat to turtle while Morphling farmed up an Ethereal Blade by 14 minutes.

Most of FD's heroes saved up a bunch of cash instead of items causing the game to even out during mid-game. Zenith and FD exchanged a few hands between 20 to 40 minutes game time with mostly Zenith coming out on top towards the end. Zenith's win in teamfights can mostly be attributed to Ice's play on Rubick who stole Reverse Polarity multiple times and utilizing it a lot better than the Magnus himself.

As the game reached ultra late game, both teams were very reluctant to push into each other and they would only fight near the Rosh pit once Roshan was close to reviving. FD attempted to bait Zenith in multiple occassions but it was to no avail although a few questionable non-buybacks from Morphling was raised by fellow commentators.

Nearing the end of the game, in a smoke gank gone wrong for FD, it was Yamateh's PotM and combined with the Rubick which turned the fight around. PotM's Satanic really went to work at the last battle. Morphling bought back and attempted a push at top but he got brought down by just the Dark Seer and the Timbersaw. Zenith pushed mid with the Morphling buyback on cooldown and took game one in 80 minutes.

In game two, First Departure went for the unorthodox trilane of Dark Seer, Rubick and Shadow Demon and it did not work out well for them. Having the more mobile line-up, Zenith was able to move around the map more quickly and provide back up for incoming ganks. Zenith was up by five kills and 4,000 gold advantage by 12 minutes.

Zenith continued their global gank and extended their kill score to 13-6 by 20 minutes. Despite having the big lead in the mid-game outmaneveuring FD, Zenith had a lot of respect for FD's massive AOE skills as they waited till approximately 30 minutes before they attempted for the tier-two towers.

FD's tier three barracks are even harder to push into but Zenith smartly placed their Dragon Knight on the front line to chip at the tower while the rest of the team stood behind him. FD had no way to engage onto a single Dragon Knight and lost their top rax through a careless move.

Next, Zenith moved towards the bot lane but Gyrocopter new Daedalus won them a battle but ultimately, it wasn't enough to win the game. Zenith had more rooms for errors while FD had none. Zenith won the second game with a 20,000 gold lead.

The first game saw the recently nerfed Keeper of the Light and Nyx Assassin both being picked into the game. However, it was Queen of Pain who stole the show - racking up seven kills within the first eight minutes. Being a momentum hero that she is, she continued to open up space for her teammates and got some more kills for her own.

The Phantom Lancer played safe and avoided dying, but he also wasn't finding as much farm as he wanted at that point. On the other hand, the Syllabear and Queen of Pain of NeoES continues to keep on getting farm and kills. Tongfu's Night Stalker, who supposedly would be for a strong mid-game, already had eight deaths by the 18-minute mark - the same time where QoP was able to finish his Guinsoo.

PL went into a curious build, opting to go for Radiance. It was apparently working out for them though, as the Chinese team was able to defend despite the massive gold and experience disadvantage. The Thai team showed patience, as they took Roshan whenever possibly slowly sieged the towers and barracks - taking the bot melee rax at minute 32 and top melee rax at minute 38 via split pushing.

Still, the then up by 25k on gold and experience Neolution team was still having trouble on dealing the final push. It was actually starting to look good for TongFu as the Phantom Lancer was able to get his diffusal blade on minute 42 - after he got his Heart of Tarrasque. However, all it took was a slight overextension and the Thai team punished the Lancer. Without buyback, the Chinese team had no chance of defending and Neolution was able to get mega creeps and the win just mere seconds after Lancer's death. The first game went in favor of NeoES.TH.

TongFu went with an Anti-Mage on their first pick on the second game, and employed a strong offensive trilane in Kunkka, Shadow Demon and Lina. Their trilane worked instantly, getting the first blood on Alchemist with a perfectly chained combo.

Anti-Mage, despite playing under his tower, is at par with Dark Seer's creep kills. He however died around the five-minute mark, and with the nerfed Tranquil boots, the higher level of Ion Shell is making it hard for him. A crucial play was made top, as the offensive trilane of TongFu dived Alchemist only to have Queen of Pain port in and get three kills for his team instead.

Just when TongFu had regained control with their strong combo, Neolution's Queen of Pain once again got a wonderful chain of spells, had an ultra kill streak and regained the lead for his team.

After dying four times early, the Alchemist of NeoES.TH showed his flash-farming potential as he was just instantly had a massive net worth. Despite the almost equal kill score at around the 25-30 minute mark, the Thai team was already on a big gold and experience lead. It was only a matter of time until Neolution made use of their lead and just demolished TongFu's base. NeoES.TH won the series via two straight games, and TongFu became the second Chinese team to be eliminated from G1 Asia. 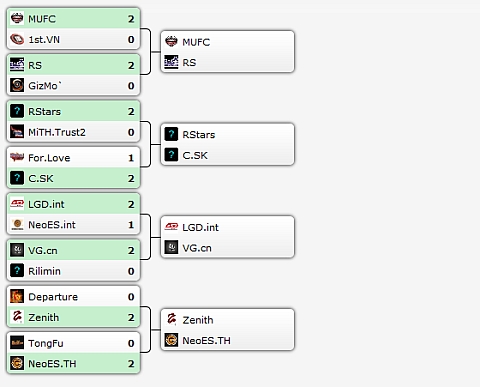 The first round of Ro8 will begin tomorrow with MUFC versus Rattlesnake at 08:00 CET followed by Rising Stars versus underdog team, Chains Stack at 12:30 CET.

The winner of the respective best-of-three will secure themselves a spot in the phase three of the qualifier will they will go against the top four placers of the G-1 League last year.

You can view the games in-game by purchasing the ticket here. The ticket of the tournament is selling for $7.99 each.