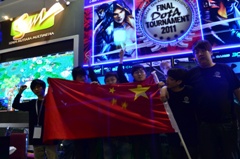 Never originally considered as the prime pick to take the championship title at SMM 2011, iG have fought roster instabilty and almost forty of the world's top teams to clinch gold at this year's tournament. They walk away with $18,000 in cash and the glory of being the world's best.

The game started with an early first blood by Earthshaker on the back of a double damage rune after he landed a perfect fissure at top lane. Things soon started to look in iG's way as top lane got decimated by Syllabear and Crystal Maiden.

Nirvana.cn was seemingly never able to get into their rhythm as iG directed the ganks and forced Sentinel's supports all over the map. With Dai on his trademark Tinker, Nirvana.cn were putting all their eggs in his basket and hoping that he would shine in the first twenty minutes.

The game was soon kept in a deadlock as both teams rushed to outfarm the other - Syllabear rushing his radiance while Tinker and Weaver rushing their core of Travel and Radiance respectively. A few gank attempts were made by both parties but neither were able to hamper the farm efforts of their key heroes.

With a sixteen minute Radiance completed by Zhou's Syllabear, Nirvana.cn needed to do something to turn the game in their favor. While Scourge attempted Roshan at seventeen minutes, Nirvana.cn were too cautious to let that slide. Keeping the entire Scourge team in check with Tinker's rockets, iG had no choice but to forfeit their attempt.

Meanwhile, Seaking's Weaver was getting uninterrupted free farm while the entire Scourge team had to deal with Tinker's map control and rocket spam. Nirvana.cn were back in the game with their dual core lineup of Nerubian Weaver and Lycanthrope entering their peak phase of the game. They got careless, however, and a well coordinated gank on Lycanthrope at twenty minutes killed off two heroes for Sentinel (Lycanthrope and Lion). An immediate buyback from the former followed and a push was initiated on Scourge's tier one middle tower.

When Sentinel decided to rush aggressively as soon as the team gathered at mid, it soon became advantageous for Scourge who was able to take off Lycanthrope for a second time and leaving him severely impaired in farm.

A couple of minutes later, iG went for Roshan right under Sentinel's nose and they carelessly gave the Aegis away to Syllabear. Tinker desperately tried to maintain pressure on iG while Nerubian Weaver and the weakened Lycanthrope continued their farm. Sadly, once again, Lycanthrope got caught off in the neutral forests at minute twenty six and for the first time in many Scourge were looking confident to take the title. Lion gave away his life soon after in an attempt to resuce his team's carry. Knowing that they were at an advantage, iG decided to push into Sentinel's middle barracks. A quick response from Nirvana forced Scourge back immediately.

With that, iG went all over the map taking off Sentinel's outer towers. Calmly but confidently cleaning off Roshan for a second time at thirty-five minutes, Syllabear's build of Phase Boots, Radiance, and Assault Cuirass looked unstoppable.

Almost hitting forty minutes, iG began their final push. Towers fell down in a split second and Sentinel were powerless to stop them. Zhou completed a triple kill but Sentinel responded with buybacks. A long battle ensued, forcing both teams to retreat.

iG were relentless. They played intelligently and managed to catch off Lycanthrope and Tinker at middle lane. They were not looking to spare either of them, and they cashed that promise.

With two heroes down, Scourge went for the coup de grace. Victory was within sight. iG were on the edge.

At forty minutes, the World Tree fell for Nirvana - iG are your new champions of SMM 2011. Who can stop them now?