General 18/09/2011, 00:10 Gosu “GosuGamers” Gamers
A tournament that began with 252 teams and spanned over six months, the HoN Super Series Opening Cup finally narrowed down the field to a single winner - Online Kingdom.

From the onset, the HoN Super Series was a lofty undertaking for the admins and a massive challenge for any team to win. There were a huge number of teams and matches to organize which often caused delays, especially during the early rounds of the tournament. In the developing HoN scene, teams were disbanding and reforming, had to schedule around numerous other tournament matches, and were faced with a cutthroat, single-elimination bracket filled with many high-level teams. One of the top contenders, DuskBin E-sports, was eliminated in the very first round after a 1-0 upset against Swedish team Glittering Prizes.

Eventually, the last two teams standing were none other than FnaticMSI and Online Kingdom, both DreamHack winners and considered to be the top two teams in Europe. After waiting over a month for the match to finally take place, the anticipation for this epic showdown may have been forgotten by some. But it all came crashing back last Thursday when the teams finally met to decide the winner of the HSS. Despite the cash and hardware prizes that came with it, victory here meant a lot more to these teams; it signified months of hard-fought games and potentially being able to claim the title of #1 team in the world. 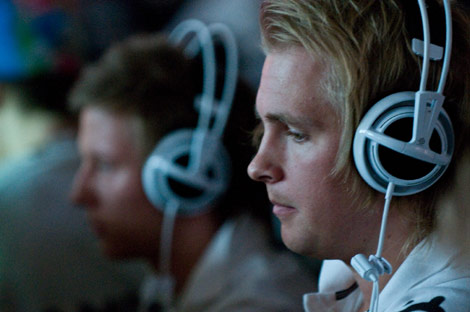 Loda (front) and Akke (back) are teammates once again.
The difference this time around? Well-known DotA player Jonathan "Loda" Berg filled SemiJew's former spot in Online Kingdom's lineup. He had played with Akke and Mag1X on KD.HoN, but would he be in shape as Online Kingdom faced the established lineup of FnaticMSI?


Things already looked interesting for Game 1 when OK first-picked Ophelia and Rhapsody and continued to piece together a strong push team. Fnatic went with one of their standard lineups, with [MSI] Trixi on Kraken and [MSI] Freshpro on Wildsoul.

OK struck first and got off to an early lead. [OK] Akke on Ophelia assisted in setting up some early ganks in the top lane, and Electrician and Pollywog Priest quickly demolished the middle and bottom towers. At around the 10 minute mark, Kraken and Torturer dove way past the top tower to kill Flint Beastwood, but paid for it when Electrician scrolled in and killed them both.

OK used their advantage to split up and push two lanes at once, then grouped up to kill Kongor at just 16 minutes. They kept up the pressure, and MSI were hopeless in defending their second towers. MSI conceded at 23 minutes and it was on to Game 2.


Both teams went for a 2-1-1-jungle lane setup for Game 2, with [OK] Akke once again playing Ophelia and [MSI] Fly opposite him in the Hellbourne jungle with Keeper of the Forest. (Bans were lost after a remake.)

This time, it was MSI putting heavy pressure on the towers of OK. The very potent combination of Electrician, Rhapsody, and KotF took out Legion's top tower, and the middle tower was next to fall at 6½ minutes. But OK got a few kills where they could, Flint continued to farm silently at 375 to 400 gold per minute, and the game would not be decided quite as fast as the last one.

Both teams played it out very cautiously; there were very few hero kills and 3 easy Kongor kills for the Hellbourne. MSI slowly crept ahead in gold and experience, pressuring OK's base towers and keeping them confined to a small part of the map. The teams clashed a couple times, but it wasn't until OK pushed out of the middle lane that MSI wiped them out and counter-pushed for the win.


MSI chose Rhapsody, Silhouette, and KotF again for their lineup in Game 3, setting up another team that could push towers and Kongor very early on. OK formed a strong ganking team, and they executed a 2-2-1 laning strategy to outnumber Silhouette in the middle lane.

OK took advantage of the 2-on-1 lane to kill Silhouette three times before she hit Level 7. Meanwhile, MSI pressured the top and bottom lanes with the power of Slither's wards and KotF's minions. They took down the top tower, but Nymphora teleported herself and Magmus to surround MSI and stop the bottom lane push. OK rinsed and repeated, ganking Silhouette at middle and immediately teleporting back to gank bottom. Hero kills were quickly 11 to 4 in their favor. 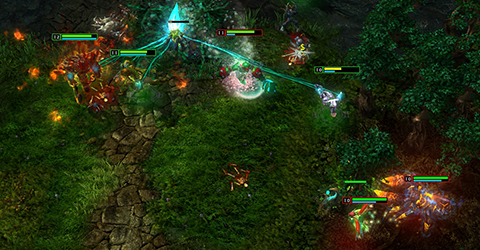 Nymphora and Magmus teleport in to flank FnaticMSI.
Although they were down by 4 towers going into the 18th minute, OK looked completely dominant, catching an overly-bold KotF twice and winning teamfights lopsidedly. They got a few towers of their own to even up the gold difference, and both Magmus and Bubbles got their Portal Keys. OK took Kongor uncontested and continued to gank the isolated members of MSI. On MSI's side of things, KotF and Amun-Ra were able to get Portal Keys as well, but [MSI] N0tail wasn't enjoying his usual amount of farm, having 0 kills and 7 deaths.

MSI fought to recover from the deficit, making a spectacular defense of their barracks at 40 minutes with Silhouette using a buyback. Silhouette got picked off shortly after and had to use her second buyback as MSI fought off OK's push once again. MSI tried to push back, but an excellent Magmus ult put an end to that, and OK took down 2 sets of barracks to seal their victory.

After six months, it's easy to forget that this tournament was the "Opening Cup" for the HoN Super Series that began with over 250 teams. Some lesser known teams managed to break into the Top 16, which is undoubtedly an impressive finish for such a huge tournament. It delivered a great final match between two of the best teams around, and I look forward to HSS events in the future!