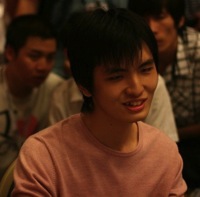 Both players will now be attending Blizzcon in Anaheim, California due to be held later this year. GosuGamer's managed to catch up with first runner up iceiceice for a chat about SC2, LoL and DotA. So read on now!


First things first the DotA community may know u well. But the StarCraft 2 community may not. Mind doing a short intro of who you are?
-"Hello I'm daryl and my nick is iceiceice. I'm 20 this year and i currently play HoN, LoL, DotA and sc2 competitively." *laughs*

So how does it feel to win the Blizzard SEA invitational? Being the only Singaporean to go to Blizzcon.
-"It's nice to come second in the tournament, and I'm just glad that i manage to win the winner brackets."

Then how come you lost to RedArchon in the finals? If you've 2-0 him before.
-"Because second gets to go to Blizzcon too. So I didn't really have the 'I cant lose' mentality. *laughs* I was like 'Second is cool. I'm at least 2nd no matter what anyway.'"

Having won the Garena LoL road to LA competition then the SC2 invitational. Whats your secret? Being good at so many different games.
-"League of legends is pretty much like DotA, so I don't need to train much for it since i already have the skills for it. SC2 was harder as I have never played SC:BW (only cheating in the campaigns), but I did it by training hard and preparing against each of my opponent in the tournament."

Lets talk a little about your DotA career then. Everyone wants to know. Who are u currently playing for?
-"I'm currently inactive but i am probably going to be playing for Aeon."

So having played LoL and DotA. What do you think is the biggest different between the two games? And which do you prefer?
-"LoL is a lot easier? *laughs* Besides that i think the main difference is how the way the game is being played. In DotA, farming is probably the way to win, while in LoL, you get a lot more gold for killing heroes, and creeps gives shit gold. The neutral creeps in LoL also gives a certain kind of damage/mana buff which makes jungling for them important. Also in LoL, you can't buyout, so one mistake in the late game = GG. I dont have much of a preference since both games have their pros and cons, but ill choose DotA I guess since I have lag issues in LoL. "

Alright. Heading back to StarCraft 2. By placing 2nd at the invitational. What else is in-stored for iceiceice in terms of SC2?
-"I'm looking forward to join all kinds of competition that I'll be able to play in, and i heard that SMM will have SC2? Not sure about that. If i get good enough I might go to Korea to play in the GomTV GSL league. *laughs* "
[Editors note] SMM is the distributor of Blizzard games in Malaysia as well as host to the world's largest DotA tournament, SMM Grand National DotA Tournament.

Being a Zerg player and having face various Terrans before. Do u feel that the Terran race is a little overpowered?
-"That race is definitely a little imba now, but then instead of nerfing it, i would rather hope to see Blizzard giving Zergs maybe 1 or 2 new units and have anti air at tier 1 instead of just queens/spores. "

Who do u think is ur biggest rival in Singapore for SC2? As well as SEA.
-"Since nirvana is quitting, I'll say oxygen for both Singapore and SEA."

As a Zerg player. Do u see any potential in the race that others may not have seen?
-"Hmm. Not really. I only play zerg because i like the Infestor. *laughs*""

By playing so many different games at once. How is your training schedule like?
-"I try to get a certain amount of games for sc2 daily, and I'll play the others when I feel like it or when a competition is nearing."

Being a DotA pro. Does any of the skills you learned playing DotA contribute to your success in SC2?
-"Yeah. I play an Infestor like it's a hero and I have awesome transfusion skills. That's about it. *laughs* Playing SC2 probably helps my DotA more than the other way round. I can micro Broodmother broodlings like no problem now."
[Editors note] Broodmother is a hero in DotA whereby it can spawn broodlings by killing creeps.

I think that's all for the day. Any last shoutouts?
-"Visit sc2sea.com when it's up! Shoutouts to furryfish and willy for the support and also i enjoy watching blizshouter's sc2 commentaries."
Terrence “MrBlue” Wong
Share Tweet
82 people reacted to this post