NVIDIA GosuCup Winner: 'I was shocked I could come back'

GosuGamers talks to Chris "HuK" Loranger after his win in the NVIDIA StarCraft 2 GosuCup, as well as after revealing his attendance in the NVIDIA GosuGamers King of the Hill.

The first three games were tough for you. Looking back, what do you think you could have done better?
- Just seemed like he knew the timing really well and had everything planned out. His style is really unique he takes a lot of risk but vs BO's they worked perfectly, maybe me taking an expo as well as teching would or provided me a leap into mid/late game where I could of take a more advantageous position 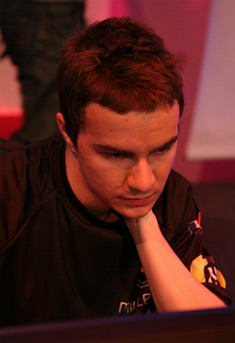 How big of a threat is the so called "Korean 4-gate" strategy in Protoss mirror, and how would you say one should adapt to it?
- Generally if you can see it come you can defend it and gain a pretty big advantage. Mainly its determining with your first scouting info on whether your opponent is doing it or not, if so there are many different angles you can take to defending vs it.

How high do you rate this tournament win?
- Money wise I think its my 2nd biggest win of all time, my biggest online win, other then that I'm not sure.

Three Protoss players in the Top 3. Coincidence, or have the Protoss players found holes in the earlier debated Terran-favored Terran versus Protoss matchup?
- Well although there were many great terrans I think they weren't represented by the best terrans in the foreign scene, while protoss weren't either I think there was a lot more protoss talent. Had Morrow, Bratok, or the Root terrans made it I think it would be a lot tighter. 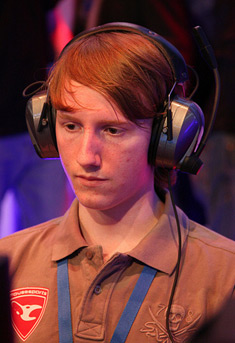 You will go up against Stefan "MorroW" Andersson in the first edition of the NVIDIA GosuGamers King of the Hill. You two are friends, how much do you play together?
- Recently not as much as we both would hope I guess, yea were pretty good friends. Just because of scheduling differences and stuff constantly coming up we haven't been able to mass as many games as we would both wish.

You lost to MorroW in a showmatch a week ago, what have you learned from that when going up against MorroW again?
- Terrans op! ;P Um hes just a really strong player and knows how to use his race to the best potential, when I can do the same we will see more even games.

All-in-all, you are up 5-3 over him in tournament matches, do you feel confident going into the match? Is there something in MorroW's play style that you fear?
- I don't feel really confident to be honest, lol. I really haven't practice a lot lately since I've been having to deal with a lot of political stuff that comes with playing at this level which is stupid. I should as player just focus on playing.... Anyways as long as we are in pretty even ground from the early ground I feel like I can win games.


"I think its going to be huge; I mean it already is."
- On StarCraft 2 in Europe
What are the key factors in Terran versus Protoss in your opinion? How should one tacke a top-tier Terran player?
- A lot of it is BO just because terran can be so strnog in the early/middle game without having equal units to any other race, especially the marauder. Depends what player but generally you have to have a really good concept of the matchup and focus on each opponents specific weaknesses.

How do you enjoy your time in Millenium? Could you describe a bit how a typical day for you would look like?
- It's been really great so far, as much as the esport's business is shady and stupid sometimes Millenium is that shining light through it all. As far as a team they have done everything they promised and more. I talk to my manager Remy on a day to day business just keeping up with results, plans, and other things.

Do you live solely off your gaming career as of today? What do you do when you don't play StarCraft 2?
- Yes, typical guy stuff I guess hang out, play video games (other then sc2), watch movies, etc.

How was it like winning the MLG Raleigh?
- Great I mean biggest win for me and my first LAN win, although I expect to post some more soon. Great feeling but I always feel really bad eliminating some really great players who any other day could/would of beat me.

North America has been going strong in the first months of StarCraft 2, do you think the future look more positive than how it looked like in Brood War?
- Definitely a lot better compared to Brood war, in Europe I think its going to be huge; I mean it already is.

What is your general experience about MLG? Rather new at StarCraft 2, but a big tournament organization as a whole - did they deliver at Raleigh?
- It was done really well in general, I mean there are always going to be things that aren't perfect but overall it was a great event. They delivered for sure but hopefully after SC2 has shown so much popularity even as a LAN event they will up the ante a little bit. The staff especially were all really great.
Patrik “Raistlin” Hellstrand
Hi. I'm no longer involved in GosuGamers. Follow me on @phellstrand on Instagram and Twitter, or drop me an email on [email protected]
Share Tweet
12 people reacted to this post