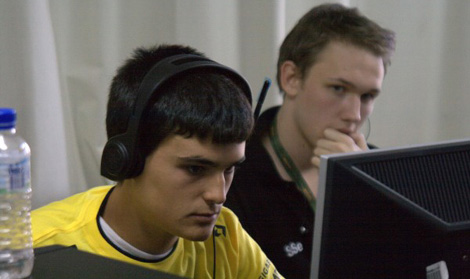 It was inevitable. The eventual clash between the widely divided, yet strongly supported, camps of Warcraft 3 and Starcraft 1. Who were the better players? There was one tournament that sought to fuel that long going debate by choosing 16 top Warcraft 3 and Starcraft 1 players on the European Realm. That tournament was the ESL TV Pro Invite Cup held Friday (yesterday).

Lots of keys were given away
What made this tournament great was also the various free beta keys they were handing out to people (let us know if you won any!) during the show. The telecast was in German but the free stream saw a lot of enthusiasm and participation. Players battled it out for 200 €, free tshirts and bragging rights to the first Cup champion. The 2 German players, XlorD and HasuObs were also present at the ESL studio to give their comments and insights into the game.

The tournament rules
The tournament was a Single Elimination, best of three format. The finals were a best of 5. Every player was allowed to veto 2 maps and the higher seed player picks first map to play.

Protoss breaks Zerg
What many saw was the tight dominance of the Protoss player LiquidNazgul almost decimating the Zerg competition with a well timed Immortal, Stalker and Zealot push while expanding. Most Zergs had no answer to this and it seemed effortless, as is with most genius plays, that Nazgul found himself in the finals.

The Terrans prove Dustin Browder Wrong
There was a lot of notes on how Terran seems underpowered these days and win percentages favour the Protoss and Zerg players. That was quickly set to rest with 2 players in particular, DeMusliM and LucifroN, both from a warcraft background showing them how well timed pushes and aggressive play can take out the competition. LucifroN with incredible timing and a very strong strategic play made his way up quickly but not without facing competition from the two time Zotac champion, Dimaga.

Lack Lustre Finals but Warcraft 3 players have game
To any observer wanting to see the games the finals were a disappointment in one way. The games weren't spectacular but that does not take credit away from the Champions, LucifroNs, almost imba-material push against the protoss Nazgul to quickly seal a 3:0 win. Nazgul countered with an immortal , collosus, zealot army but was mostly outdone by the stim pack charged marauder/marine army of LucifroN.