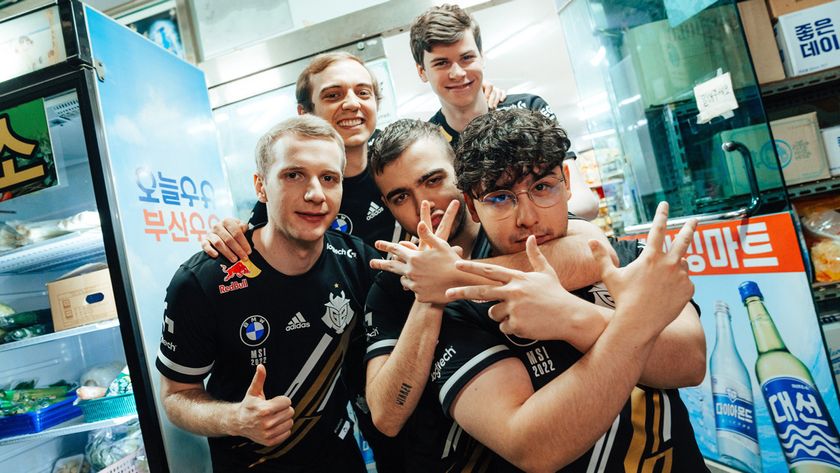 Six teams went up against each other today in a series of intense matches, all of which will eventually determine which four teams successfully make it into the Knockout Stage - and which two get eliminated. The six teams fighting it out in the Rumble Stage are:

Day One saw G2 Esports coming out on top, with Saigon Buffalo taking heavy losses. There’s still time to level the playing field, but let’s do a quick recap of today’s matches first.

EG vs RNG was a slow match to start, but RNG was the clear favourite of the two. Even after having to repeat all of Group Stage matches due to ping disparity, defending champion RNG has stood undefeated throughout MSI. It would take an upset for EG to end that winning streak - but do they have what it takes? Well, no. But EG put up a good fight anyway.

To be fair, at the nine-minute mark this looked like a match that could’ve gone to either side. Both teams had a one-to-one kill tie, with RNG having a low 1k gold lead. A late first dragon went to RNG in a rather slow early game. A teamfight at the 12-minute mark went to RNG too, with EG having to make a quick retreat. RNG nabbed their second dragon at the 15-minute mark in a game now leaning slightly more in their favour. The team had a 5k gold lead and one kill on EG, which could have been all it needed.

The midgame continued to unfold at a slow pace, with RNG looking to pick up objectives and EG doing their best to keep them off-balance. By the 23-minute mark, RNG had the lead. Despite EG locking down the Baron, RNG had a 4k gold lead, four turrets and five kills over EG. With better control of the map and more firepower, RNG rolled into EG’s base and locked down a victory.

Next game: SGB versus PSG, battle of the similar-sounding acronyms - see above for a guide if you ever lose track. The early game saw a more or less predictable rollout, with both teams vying for map control and gold where they could. By the 10-minute mark, PSG Talon had a lead with two kills and 1k more gold - and that momentum continued right into the midgame. In 21 minutes, PSG had an absolutely dominating lead with 15 kills to SGB’s 3, and a more than 10k gold lead. Having capitalised on an early lead effectively, PSG won the game.

Next up, G2 returns after an incredible win to take on RNG. This was a very interesting match, considering that for the second time today, we were seeing two teams come in with an unbroken winning streak. RNG loves aggressive plays, so it shouldn’t be surprising that we saw both teams trading blows in the early game already. G2 suffered First Blood seven minutes into an otherwise evenly-matched game, but we’ve seen this team turn an early lead around before. And wouldn’t you know it, by the 11-minute mark, G2 already had one more kill over RNG.

Control over this game went back and forth, almost like we were watching a game of ping pong. Just as RNG began to pick up the pace, G2 started to play cautiously - with one teammate escaping from certain death with naught but a sliver of health remaining. G2 stole that lead back by the midgame, eight kills to RNG’s five and a 3k gold lead. We’ve seen these teams leverage map knowledge and solid ability combos in past games, which means that most of these early losses and commanding leads were thanks to better tactics and simple mistakes. While G2 took down the second dragon for example, RNG took the midlane Turret and a quick kill while at it, simply because G2 placed priority on the wrong objective in the heat of the moment.

That slip-up proved not to be a deciding factor, however. G2 kept its commanding lead and used it against RNG, eventually charging in for the big win. RNG’s big winning streak comes to a heartbreaking end, while G2’s streak just keeps chugging along unperturbed.

Next, EG versus SGB! Both teams have something to prove after their losses today, but who comes out on top? Barely a minute into this match, the game was paused - though we weren’t given an immediate reason why. Fortunately, a restart wasn’t necessary and we saw the match resume a few minutes after. EG had two kills and 1k gold over SGB by the ten-minute mark, but neither team had managed to take down a turret yet. SGB and EG were trying their best to make it to the midgame without giving the other team too wide a lead.

Despite a few teamfights going down, EG maintained a very similar lead up to the 20-minute mark with the teams deciding to play it safe rather than try to make big, risky moves. With a whopping 7k more gold in their pockets, EG made a push into SGB’s base at 28 minutes. This was definitely one of the more exciting final pushes of the day, with teamfights won by the skin of their teeth and leading to them grabbing a well-deserved win.

Finally, we have PSG going against T1. Despite T1’s loss against G2 earlier today, the team remains a favourite of the competition thus far - so PSG had their work cut out for them here. This wasn't a match T1 had in the palm of its hands from the outset, by any means. The team managed to get one kill and a thousand gold over PSG and just kept that going up until the midgame, with PSG doing their very best to not let that gap widen.

By the 10-minute mark, it was all about focusing on the objectives. T1 was the closest to getting a turret in the top lane but after shaving down its health, decided to retreat. Still, they got the turret down eventually and kept that streak of victory going right into their second turret in the midgame. PSG was behind at this point, with T1 simply having a better eye for reading their plays and setting up early control of the map. After a spectacular fight against PSG, T1 toppled the midlane turret and almost marched into PSG’s base. Looking back, this was the turning point - it was T1’s game now.

22 minutes in, T1 had a 7k gold lead and PSG still hadn’t managed to get an objective down. It’s difficult to come back from that. PSG mounted a strong defense, but when T1 made a final push into the enemy base, PSG wasn’t able to hold them back. T1 made some good plays early for this match, and it paid off. PSG loses and T1 wins.

And that’s it for Day One of the Rumble Stage! Stay tuned for more of our coverage of Day Two tomorrow.

Do you think Saigon Buffalo can pull through these losses?

31st SEA Games: Team Vietnam gets off to a perfect start after steamrolling Malaysia in Group B