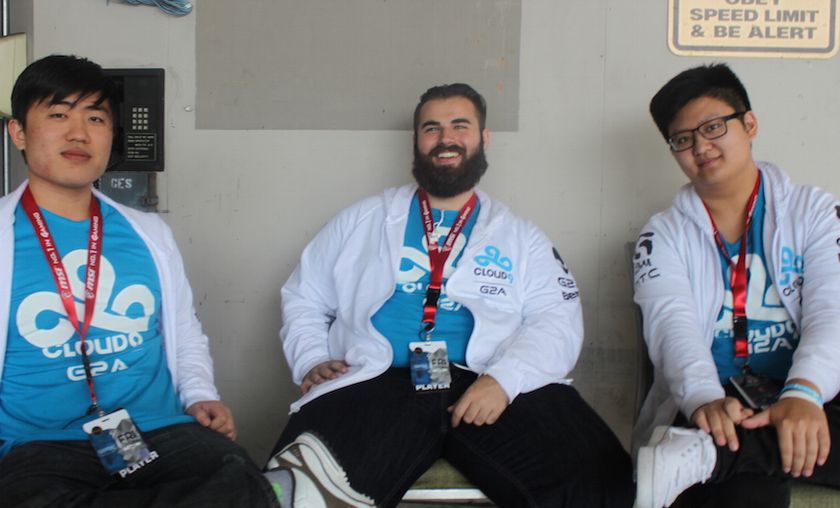 The first day of MSI MGA 2015 at PAX Prime had just ended, and all the fans, casters, and players were making their way out of the arena. I caught DunkTrain, iDream, and Fan of Cloud 9 Maelstrom and sat down for an impromptu discussion about the days events and some speculation of how tomorrow might go. We talked about virtual reality, why Tempo Storm makes mistakes that don't matter, and how iDream is the most likely person on their team to make the dangerous play in search of glory:

You guys didn’t get a chance to face eStar due to their visa complications. Did you dodge a bullet or were you looking forward to playing them.

Dunktrain: I think more than anything we are a little upset that we didn’t get a chance to play against such a good team. We were really confident going into the match, so it’s more of a missed opportunity.

Fan: I used to be the one who would hype up China. Like two months ago I kept saying “eStar is like, the best team ever”. I was really looking forward to playing them and getting a chance to talk to them about strategies. It sucks.

Yes. The other end of the bracket is the international part - you still have to get past Tempo Storm first.

You guys are one of the few teams that have been able to beat Tempo Storm in a set. What plans do you have for tomorrow? How are you going to emulate that?

DunkTrain: The same as every time; try to win the draft and play tight. There is no real tricks or secret.

No “this-one-trick to beat Tempo Storm: Hots players hate him!"

Dunktrain: *laughs* . Yeah, none of that.

What would you say their strength is? They capitalize on mistakes or they don’t make mistakes?

DunkTrain: They don’t make mistakes that matter. They make a lot of mistakes, but when it comes times to something that will actually cost them the game, they don’t make those. You either need to force mistakes out of them, or try not to go into to super late game, because you aren’t going to find that free win off their mistakes.

We are at PAX Prime! What are some of the games and stuff you want to see now that day one of MSI MGA 2015 is over?

DunkTrain: We actually went to check out Occulus and that was super fun. I’m probably going to play some Magic: the Gathering now. There is a really cool flashback limited format going on.

Last time I tried virtual reality, I was playing this game and I was running through trees or something … vomit machine.

DunkTrain: Was that the name of the game?

Fan: It was my first time, and I heard a lot about it before. I thought it would be exactly like reality; I don’t think it’s there yet but it’s still really cool.

The next big thing: A virtual reality MOBA game. Would you play it?

DunkTrain: I think virtual reality is something really genre specific. I don’t think Moba’s would do well with it, but like… Mech games? That is really cool.

The big teams (other than Tempo Storm) to beat tomorrow are MVP Black and Team Liquid. Of those two, which would you rather face?

DunkTrain: I want to play MVP Black because I think we can beat them. Not only are they weaker than Liquid, but I think they don’t play really weird frustrating heroes like Team Liquid. MVP Black stays more standard. Liquid plays weird stuff. Hammer, Vikings, Ugh.

Fan: I think MVP black is weaker than Liquid too, but I want to play Team Liquid just because I want to smash EU.

Day two is going to be huge for this tournament. I think these are going to be closest matches, no more 2-0’s.

Being in a lan environment, some teams crumble because they don’t have the large stage experience. Do you think you do better at lan or is there still a lot of pressure?

DunkTrain: I think more than anything lans add momentum to a series. The pressure can be really positive and help, but after a team loses the first match, they just feel so defeated and they suffer after that. Winning the first game is so important because you get the momentum.

Fan: Every team today that lost did pretty well in the first game, but once they lost they got crushed. They lost all momentum.

DunkTrain: That happens when you lack big stage experience.

Fan once told me that your biggest weakness as a team is that you each are individually very strong players. So sometimes, each member is trying to make the big play or be the hero that wins the game.

Do you think that will happen tomorrow? And if so, who will do it?

*Everyone points at iDream*

iDream: I’ll take that label. No ring of frost tomorrow.

If it was circle of frost it would be so much better right? Sphere of frost? Globe of frost?

Anything you guys want to say before we sign off?