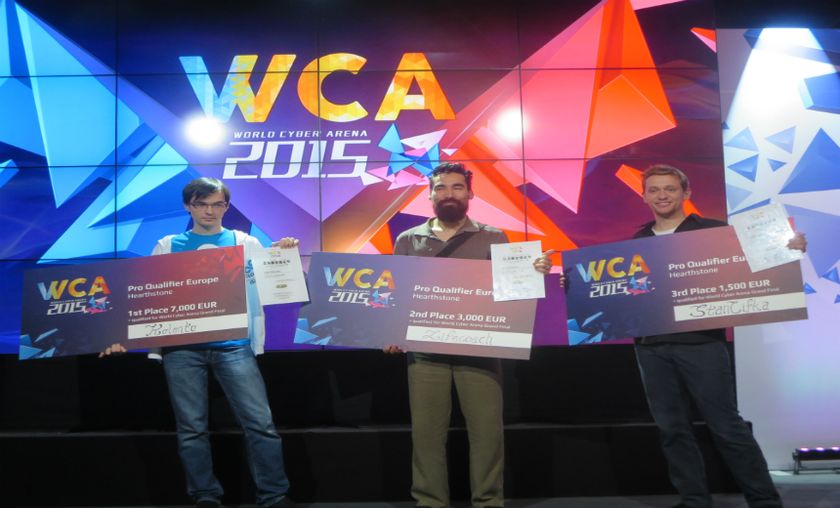 After a disappointing group stage, making him the big underdog, the Ukranian player showed his ability to get back up quickly and stay focused.

Saturday the second stage of the World Cyber Arena Pro Qualifiers began, after the group stage was held from Wednesday until Friday (full article here). The first match of the second stage was the Upper Bracket final between Stanislav “StanCifka” Cifka and Adrian “Lifecoach” Koy. This match was not deemed as important as the Under Bracket final, since both StanCifka and Lifecoach had secured their ticket to China. However, a victory in this match would mean a guaranteed €3,500 and a good chance at winning the first price: €7,000.They had met the day before, which had resulted in a fairly simple 3-0 victory for Lifecoach. And, history repeated itself. Again with a seemingly easy victory, Lifecoach continued his rampage through the tournament, going 4-0 altogether and claiming a spot in the Grand Final of the Pro Qualifiers.

There was much more on the line in the second match. It was Aleksander “Kolento” Malsh who was facing Thijs “ThijsNL” Molendijk in the Lower Bracket Final.The winner would claim a ticket to the WCA Grand Finals in China and win at least €1,500, but the loser would not win anything. The odds seemed to be in ThijsNL’s favor, as he had won against Kolento the day before.

Game 1 started off with ThijsNL choosing for his Hanlock, and Kolento for his Patron Warrior. This is normally an easy victory for the Handlock. [card]Hellfire[/card] is one of the most devastating things a Patron Warrior can overcome after flooding the board, and Handlocks run at least one copy of it. Next to that there’s also no way that Patron Warrior can continuosly get rid off all the big, sometimes taunted minions a Handlock puts on board. This was not the case in this match. Kolento performed an extremely well executed board clear, one that might even be seen in Trolden’s Top 5 Best Plays one day. Luck was on Kolento’s side, as a topdecked [card]Warsong Commander[/card] allowed him to take the first game.

In the next game the luck was not on his side though. Both players brought their Hunter decks, and the match was quite equal. In the later stages of the game however, ThijsNL managed to push Kolento in a defensive position. This was when Kolento changed mentality and decided to go all or nothing. Nothing it was. A 33% chance of lethal (by getting Huffer from an [card]Animal Companion[/card] did not go in his favor, and ThijsNL tied the series.

Kolento stuck to his Hunter, and ThijsNL now chose his Patron Warrior. Kolento seemed to take an easy victory, as he managed to get ThijsNL very low in a relatively short amount of time. The Dutchman kept his cool and stabilized, which took some serious concentration and knowledge of the game. He was still quite low on health decision, and unfortunately felt like he had to go all-in. Whether or not the odds should be in his favor, they weren’t. Kolento had patiently held his [card]Unleash the Hounds[/card] in his hand until ThijsNL would flood the board with minions, and that is exactly what happened. The hounds were unleashed aferwards, and Kolento took a 2-1 lead.

ThijsNL now had to decide whether he would want to face Kolento’s Oil Rogue with his Handlock, or with his Patron Warrior. Both would be unfavorable match ups for ThijsNL, but in the end he sided with his Handlock. Whether or not his Patron Warrior would have been a better decision, it probably would not have mattered. Kolento was in top shape, and getting lucky with his draws here and there as well. Ending with a huge dagger (and having even more burst damage in hand), it was Kolento who grabbed the last ticket to China at the cost of ThijsNL.

Sunday was the last day of both Gamescom and the WCA Pro Qualifiers. First match of the day was the Consolation Final between StanCifka and Kolento. The winner would advance to the Grand Final and win at least €3,500, whilst the loser would have to do with “just” €1,500.

The first match already offered a surprise. The surprise was not so much the deck choice (StanCifka chose Midrange Paladin, Kolento Oil Rogue), but rather the result. Oil Rogue is considered favorite against a Midrange Paladin, however StanCifka showed that it’s not impossible. Fair enough, he had probably the best mana curve one can get with the deck, but having all the cards is still not everything. Kolento got lower and lower on health, and in the end couldn’t wear off the wrath of Ashbringer as it hit his face for a cruel final blow.

Whether it was the fatigue, or maybe another influence, StanCifka seemed to be off his game from after this. In game 2 he made some plays with his Hunter that could definitely be marked as ‘not optimal’, and Kolento took full advantage from it with his Warrior deck. It resulted in a concede by StanCifka, as he was staring in the eyes of a troublesome, strong [card]Frothing Berserker[/card].
Game 3 looked like it was going to be a victory for StanCifka, as he was far ahead of Kolento’s Hunter. His Zoolock deck got the damage going from early on, and a threatening board was created on StanCifka’s side. Kolento stayed calm, thought carefully about all the decisions and it payed off. He managed to swing the board, resulting in StanCifka conceding yet again.

The fourth game was played very tactically by Kolento. Knowing that his opponent’s Hunter deck did not have any [card]Acidic Swamp Ooze[/card]’s or a [card]Harrison Jones[/card] in it, he decided to create a strong weapon, but not attack with it. This way he tricked StanCifka into believing he had a [card]Blade Flurry[/card] in his hand, which wasn’t the case. Eventually StanCifka played [card]Dr Boom[/card], so Kolento had no choice. However, the latter one immediately created a huge board again. This proved to be too much for StanCifka, who conceded for the third game in a row, taking the 3rd place for granted.

The finals started off with Lifecoach using his Midrange Hunter against Kolento’s Oil Rogue. In the early and mid game Lifecoach managed to bring down Kolento to nearly half of his health, whilst the other way around exactly 0 damage was done. This gap proved to be too big for Kolento to close, and contrarily to their encounter earlier in the tournament, it was Lifecoach who took the first game after an excellent performance.
A clash of combo decks followed, when Kolento chose his Patron Warrior and Lifecoach his Midrange Druid. Lifecoach started off solid, with an early [card]Shade of Naxxramas[/card] hitting his side of the board. Kolento had so sacrifice two [card]Whirlwind[/card]’s to clear the entire board, but by turn 7 had managed to flood the board with many copies of [card]Grim Patron[/card]. Again a sacrifice was made, but this time by Lifecoach who had to use an [card]Innervate[/card] in order to play the [card]Force of Nature[/card] [card]Savage Roar[/card] combo and clear most of Kolento’s board. The Ukranian player flooded the board again, managing to climb to a mind blowing 52 health using [card]Armorsmith[/card]’s to become seemingly untouchable. As many times before, Lifecoach proved his resilience and didn’t give up. Using another Savage Roar to clear some minions from the board, he started to build up his own. With the help of [card]Dr. Boom[/card] and his Boombots, Lifecoach stabilized at 11 health and started bashing his opponent’s face. Kolento, who had used many of his resources already, fell more and more behind. Again there was no recovery possible and again Lifecoach won.

Only Patron Warrior was left for Lifecoach now, and Kolento chose to face it with his Oil Rogue. Lifecoach managed to put in damage early in the game, and as the game was progressing both players got lower and lower on health. But, as is often the case with this match up, the Rogue was able to clear minions repeatedly whilst dealing damage as well. Kolento had teched in a [card]Sabotage[/card] in his deck, which allowed him to destroy a [card]Death's Bite[/card]. It all resulted in a win for Kolento, who was now 1-2 behind, but still had hope.

More and more people joined the venue at the WCA booth, and the phrase “Everyone, get in here!” was a fit title for the fourth match as well. Both players brought their Patron Warriors, though with slightly different cards in them. Lifecoach, for example, had a [card]Brawl[/card], whilst Kolento chose to use a [card]Shield Block[/card]. The game went back and forth a lot, and both players made use of their teched cards. Lifecoach took quite a risk by playing Patrons on the board with less than, as a [card]Frothing Berserker[/card] in combinations with whirlwind effects can be devastating. And devastating it was. Kolento’s [card]Unstable Ghoul[/card] forced Lifecoach to have a Patron-flooded board, and after a few whirlwind effects the Frothing Berserker finished the game in favor of Kolento. 2-2.

It now came down to both players’ last decks. For Lifecoach this was the Patron Warrior, for Kolento his Midrange Hunter. Kolento took a very big lead, and at the end of turn 6 had his opponent down to 7 health only. Lifecoach had his board filled with Grim Patrons, but no way of gaining armor at all. And even if he had, there were many ways for Kolento to deplete it right away. However, with no armor up at all, Lifecoach was too vulnerable. Kolento finished the reverse sweep, and won the WCA Pro Qualifiers.

Kolento's victory in the tournament was a surprise for many people. In the group stages he had not won a single match, yet the tournament format allowed him to reach the Grand Final. Also, his opponent Lifecoach had had played an excellent tournament thus far, not losing a single series. StanCifka, Lifecoach and Kolento will be going to the main WCA event in China, which is to be held from December 17th until December 20th.