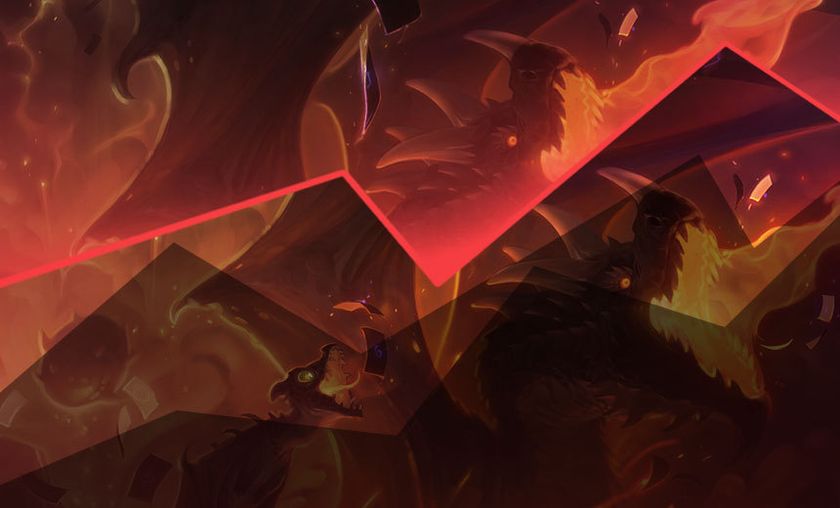 Tomorrow, the HCT Spring Preliminaries for Europe will start. A total of 222 players will take part in the Tavern Hero Qualifier and the main HCT Preliminaries, the latter of which will determine the eight to move on to the Spring Championship. Of those eight, one will join Ole "Naiman" Batyrbekov as Europe's second representative at Blizzcon.

Blizzard were kind enough to provide us all 888 decklists (!) that will be played over the weekend. We took this as the best opportunity to put them to graphs and provide you with the most extensive stats analysis of the Standard metagame at the moment. 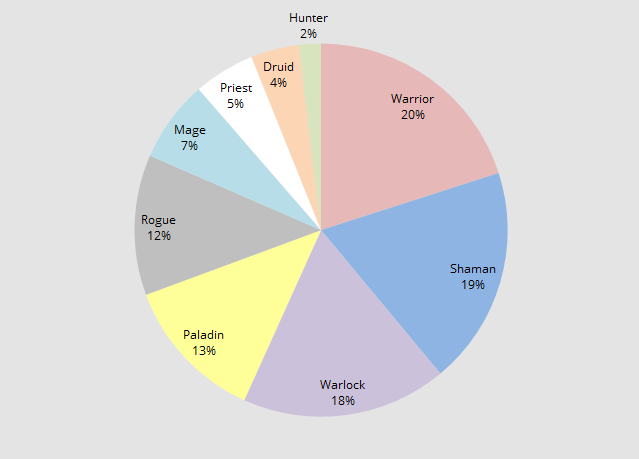 Warrior and Shaman have a healthy lead in "who's the prom queen" race. Warrior is 20% of all decks and present in 80% of all line-ups, while Shaman's percentages are 19% and 76%. Nothing comes close to these two, not even Paladin which features the most popular deck in the meta right now in N'Zoth Paladin or Warlocks with their Zoo.

As it's always the case with the popular classes, versatility is the name of the game. The newfound Tempo build has been doing wonders for the Warrior class and is present in 74 line-ups in total. The good old control is right up there, followed by another old acquaintance of ours: Patrons! Several players have also heard the Whispers of the Old Gods and are bringing [card]C'Thun[/card] controls to the tournament, which adds even more versatility - and from here popularity - to the class.

In the case of Shaman, things are a bit different. The class is represented by two archetypes mostly: Aggro Shaman and Midrange/Totem Shaman and their slight variations. [card]Thing from below[/card] is a card making an appearance in both builds, and looks to be one of Thrall's strongest new toys. Also, why do you need versatility and cool tricks when you can just melt someone's face off?

Taking a quick stop on the bottom of the chart we see poor Rexxar, brought by only 17 of 222 players. Hunter is still struggling to find a deck that works and has had a mighty fall compared to when it used to rule tournaments. Druid is much is the same position, most people running slow, ramping decks, often relying on [card]C'Thun[/card] as finisher. 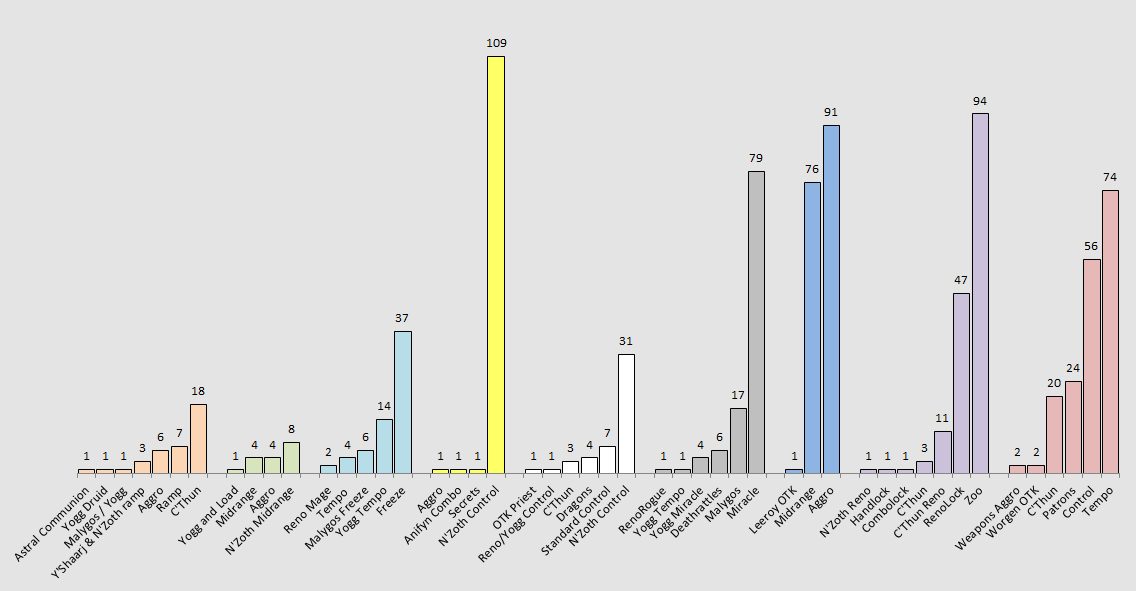 A quick glance at the graph below gives us a general idea of what the metagame looks like currently. Most classes rely on one, maybe two, archetypes who have established themselves as the clear favorites. The biggest discrepancy between "the best" and "everything else" is with Paladin and Rogue where N'Zoth and Miracle rule supreme, and to some extent with Mage (Freeze) and Priest (N'Zoth Control).

Warlock's flavor of the month is Zoo. The aggressive deck found a trusted friend in [card]Darkshire Councilman[/card] and is one of the strongest decks in Hearthstone at the moment. Nevertheless, there are quite a lot of competitors willing to be rich and going for those grindy [card]Reno Jackson[/card] controls.

The two most popular classes are largely split at the top. Warriors are divided between the new Tempo builds and various iterations of Control Warrior. For Shaman, the battle between Aggro and Midrange has gone in favor of Aggro but not by a large margin.

Even before Chakki won DreamHack Austin largely on the back of his N'Zoth Paladin, this Old Gods refined build was expected to be one of the kings of the meta. Tons of healing, premium removal and big finishers, N'Zoth Paladin is control players' wet dream. Most of the decks in the preliminaries are imitating entirely or largely Chakki's build, featuring both Rags and [card]eadric the pure[/card]. A smart choice, considering the metagame hasn't really changed in this one week, so why experiment with something that has already proven itself.

It's only logical that the arch nemesis of the #1 deck is in the top three as well. Obviously, there's more to Zoo than just gunning down Paladins. We've mentioned Darkshire Councilman as the new start of the deck but there's also [card]forbidden ritual[/card] as a top board developer and [card]knife juggler[/card] trigger and [card]possessed villager[/card] as that very annoying one-drop you thought was average until it killed your big minion with [card]power overwhelming[/card] and stayed alive. The Zoo variations are numerous, mostly differing in the top end of their curve, choosing to run any combination of [card]leeroy jenkins[/card], [card]doomguard[/card] and [card]sea giant[/card] as finishers.

Play early game minions. Attack face. Protect them with spells. Attack for face some more. [card]Doomhammer[/card] the pitiful opponent (by hitting him in the face). Alternatively, play a 4-mana 7/7 and make your opponent complain on Reddit about balance.

There's nothing to analyze or talk about in-depth about Aggro Shaman. Just a brilliant source of endless damage that can cook even the most resilient control decks if the draws are with it.

Rogue is not only not dead, but very much in fashion. With [card]Loatheb[/card] gone, [card]gadgetzan auctioneer[/card] is free to make deals, including drawing half the deck in two turns and using his friends to kill you from the shadows. With the meta being relatively slow at the moment, Miracle is given plenty of time to draw into its win conditions, too, Zoo and Face Shaman being its primary enemies, especially when [card]blade flurry[/card] is no longer in Rogue lists to keep enemy boards under control.

Shaman is the only class represented twice in the top five, which is frankly a long time coming for Thrall. A lot of players are experimenting with totem-centric builds around [card]thing from below[/card], [card]master of evolution[/card], [card]thunder bluff valiant[/card] and [card]primal fusion[/card], finally making sense of Shaman's objectively weak hero power. [card]bloodlust[/card] is often used as the main finisher but it's not uncommon to also see [card]al'akir the windlord[/card] or [card]fire elemental[/card] in these builds.

Of course, dear reader, I knew you were going to ask that. Below, I've chosen three of the most unorthodox decks if you're feeling brave and daring on ladder this week.

Do you see this little blue smudge on the Shaman archetypes with a lonely "1"? That's Dodje's Leeroy OTK Shaman. The deck has implemented more or less every removal and card draw mechanic available to the class and shoots for a big [card]emperor thaurissan[/card] discount on Leeroy and [card]Windfury[/card] plus whatever else burst cards are in the hand. Ideally, there's a double Rockbitten Leeroy for 24 damage.

OK, so this is new. Completely. OTK Shamans aren't unheard of but that's the first time I see someone put [card]yogg-saron, hope's end[/card] AND [card]reno jackson[/card] together in the same deck.

I really don't know what to think about RebelSoldier's deck. I don't even know if I have the courage to test it on ladder. It feels awesome, fun and charmingly chaotic, though, so if you're in the mood for exactly that - what are you waiting for?

I remember writing about Miracle Druid back in the days of DreamHack Winter 2014 when Lifecoach was running a list that would kill you with six-damage [card]moonfire[/card]s through [card]malygos[/card]. Obviously, a lot has changed since. Druids have gotten [card]living roots[/card], [card]raven idol[/card] and [card]yogg-saron, hope's end[/card], possibly marking the return of Malygos Druid as a cool cheese deck for whoever can pilot it.

Do you enjoy these stats analyses?

All decks from the DreamHack Austin playoffs